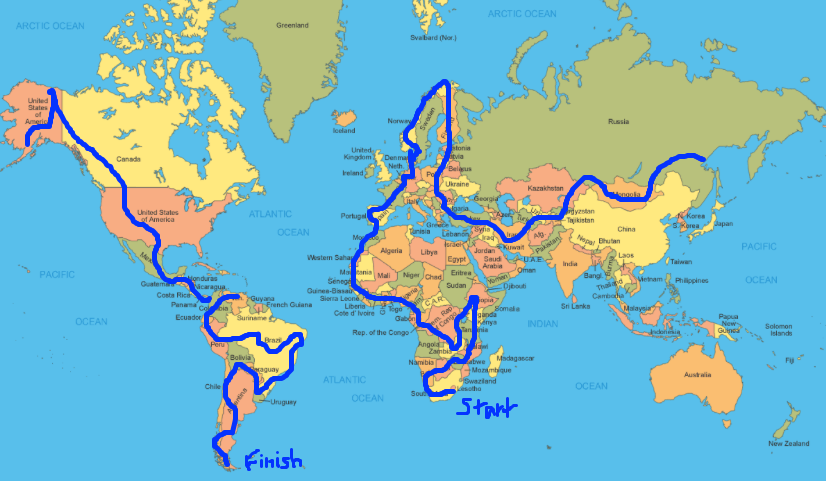 To come up with the route we looked at all the places we were dying to visit, which turned out to be most places on the planet. With that small detail established, we took into account the seasons and determined the rough amount of time we’d need to join all the dots. Our original 2 year career break thus morphed into a 3 year one. More money was saved and the planning began in earnest.

The planned route will have us travelling through Africa for about 10 months, before a quick dash through Western Europe into Scandinavia. This will complete our first Earth’s “end to end” of the trip, riding from the Southern most tip in Africa, Cape Agulhas, in August 2014, to the Northern most tip of Europe, Nordkapp, in about August 2015. From there it’s Eastern Europe then through Turkey, Iran and Central Asia. It is at this point that winter will stop us from continuing the journey for approximately 4 to 5 months. We plan to spend this time in Almaty rebuilding the motorbikes, learning Russian and snowboarding on the slopes situated just outside the city. That is the rough plan anyway.

When the snow thaws we’ll leave on our second leg of the trip and travel through Russia and Mongolia and Russia again along the Road of Bones to Magadan. From there we’ll catch a ferry to South Korea or Japan then fly the bikes to Anchorage, Alaska. From there its up to Prudhoe bay and then all the way down until we hit ocean at the bottom of South America; our second end to end.