Day 1 in South Africa – How good could it get?

We were trying to think what would constitute a fantastic first day of riding here in South Africa – the first day of our round the world trip. Meet some welcoming local people and strike up some genuine friendships? Yep, that is always first on the list. Eat some unique local food? If we can, that would be great. Find some local roads and see some new and interesting landscapes? Now we are talking! Well then, how about ride some reasonably rough and technical trails on a private game reserve, spot some giraffe, kudu, impala and bush buck, have a fantastic dinner around a fire with some wonderful hosts, then fall asleep in a African safari style open room looking out over a river after a handful of beers?

Yes, that was our first day of riding in South Africa!

Before we left Australia, we sent a callout on HU to local Durban riders in the hope we could find someone to show us around a little while we settled in to riding in a foreign country. We received a handful of very friendly responses of accommodation and any other help we required, and one from a fellow who was hunting geodes. Tanya, being a hopeless geologist, was love struck.

We met Stuart while waiting for our bikes to arrive in Durban. We thought we had been ever so cleverly organized for our bikes to arrive the day after we did, but alas, they did not. The bikes arrived a few days late after being stuck in Jo’burg for no apparent reason, which in retrospect was probably for the best as it gave us a couple of days of convalescence after our utterly hectic, borderline chaotic departure from Australia. We had about one and a half hours sleep the night before departure; we conscripted the help of family in packing, threw most things we needed and lots of things we didn’t into our bags and hoped for the best.

Stuart showed us around Durban while waiting for our bikes to arrive. We walked along the beachfront, and contrary to all the over zealous foreign affairs warnings, managed to not get shot, stabbed, mugged or even accosted. He then took us to eat at a genuine local haunt where we tried the Durban specialty, the Bunny Chow. An Indian curry served in a loaf of bread, it was a great introduction to Durban’s multicultural history. Especially so, when chased down by a local lager. 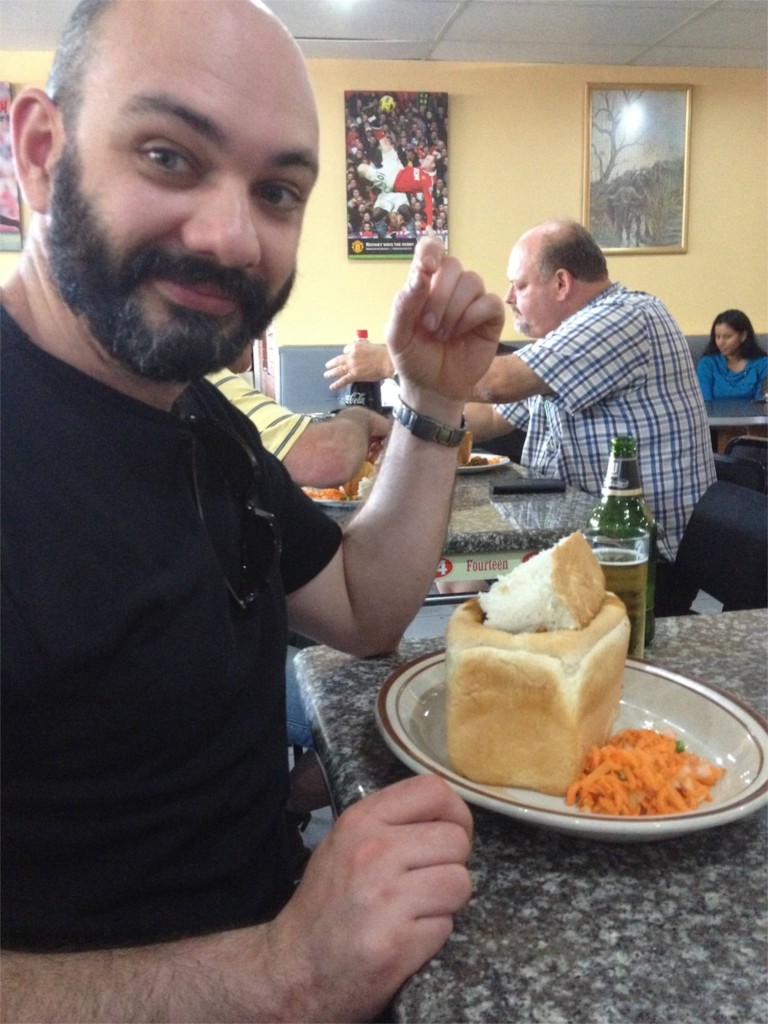 The following day we picked up the bikes from the local trucking depot and after not quite two hours of crate unpacking, bike reassembly and luggage packing, we hit the road. With Stuart in the lead we rode up through sugar cane fields and into Zulu country. We grabbed some lunch at a teahouse were we enjoyed a Vetkoek, literally “fat cake” in Afrikaans. And the name lived up to the reality, the Vetkoek was deep fried bread covered in curried mince. Good fuel for hard working farmers, maybe a little excessive for sitting on a motorcycle. 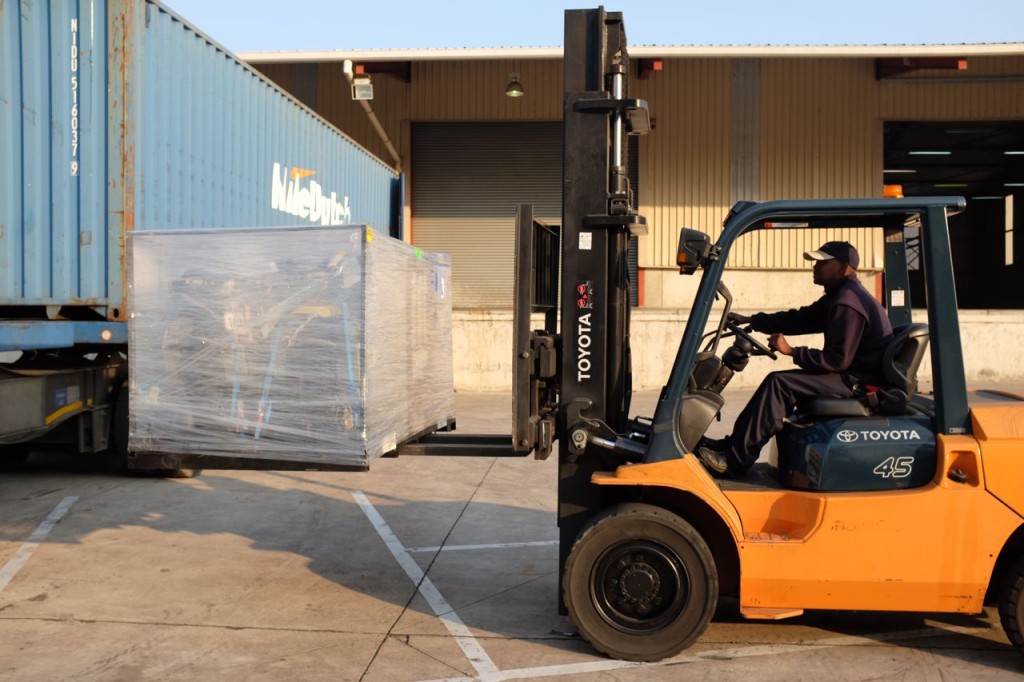 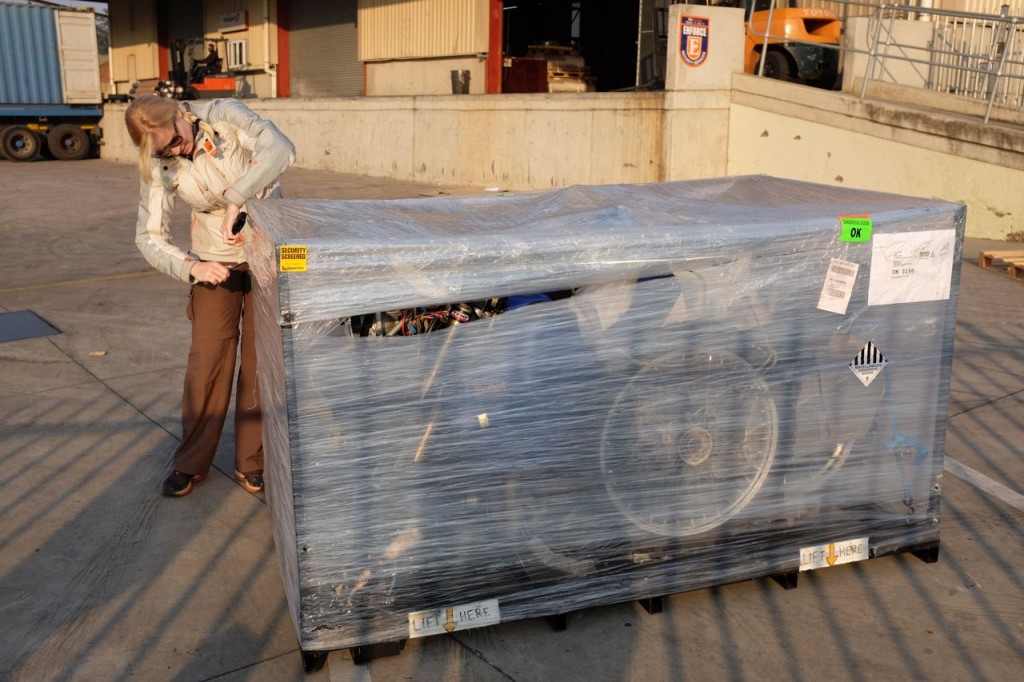 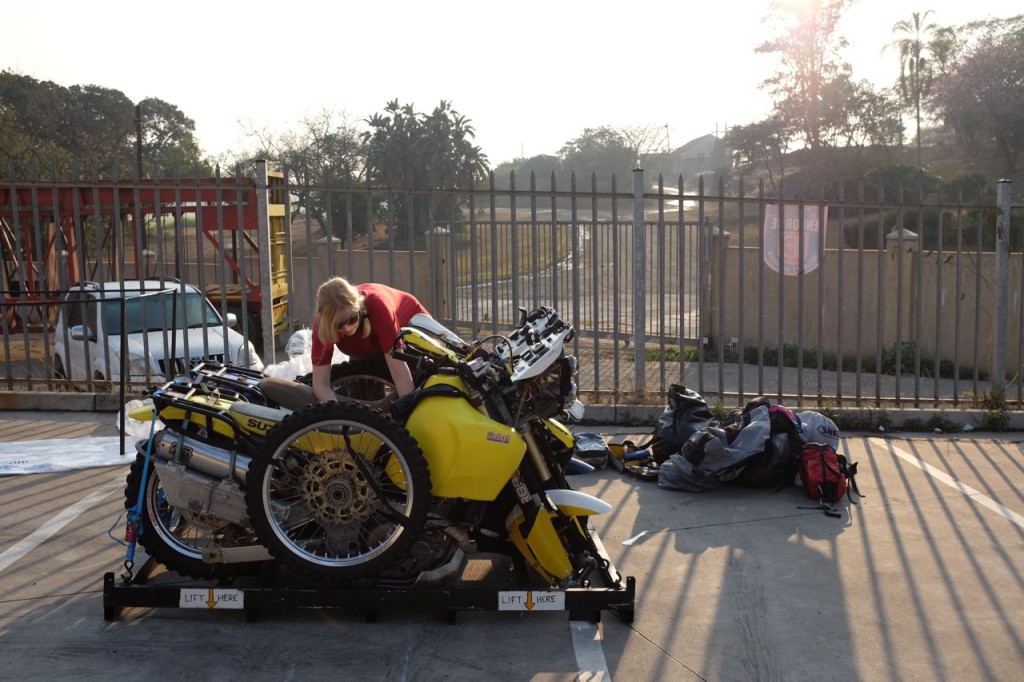 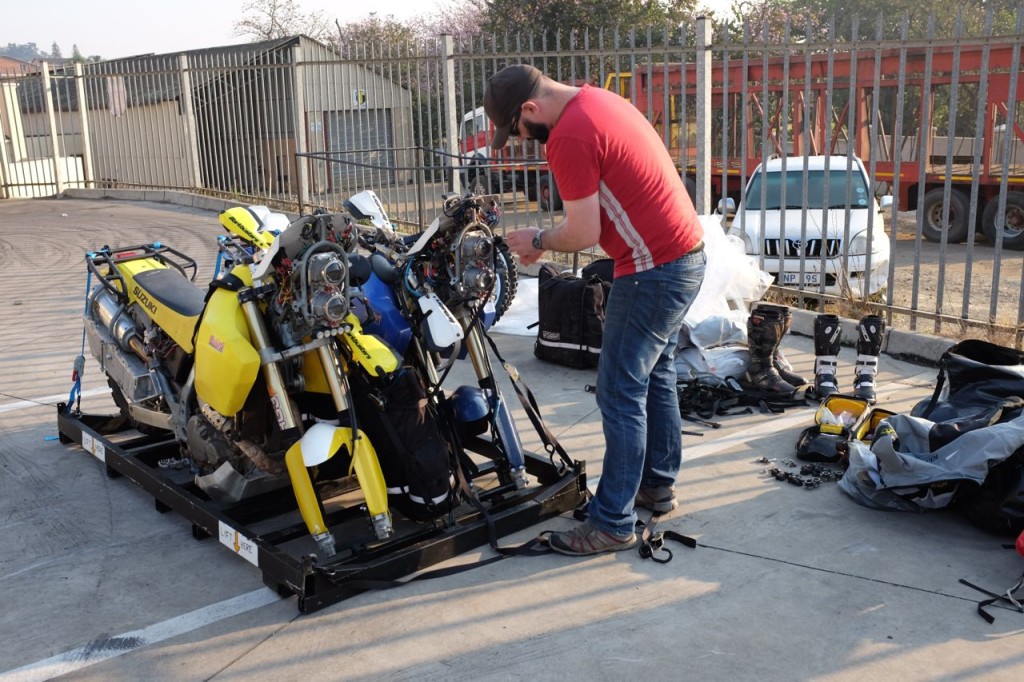 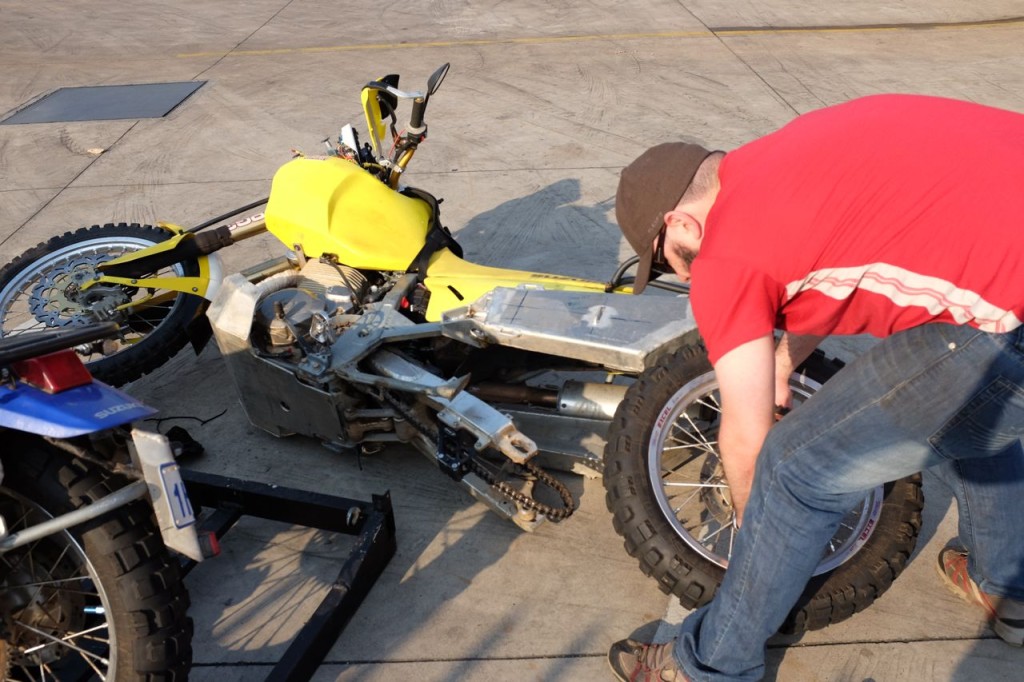 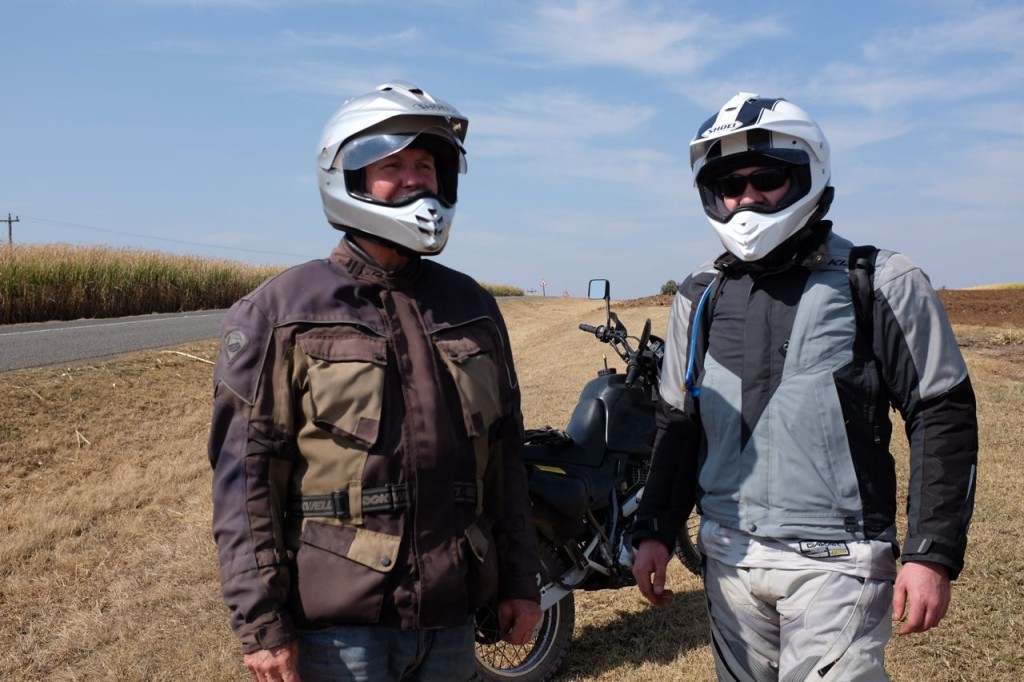 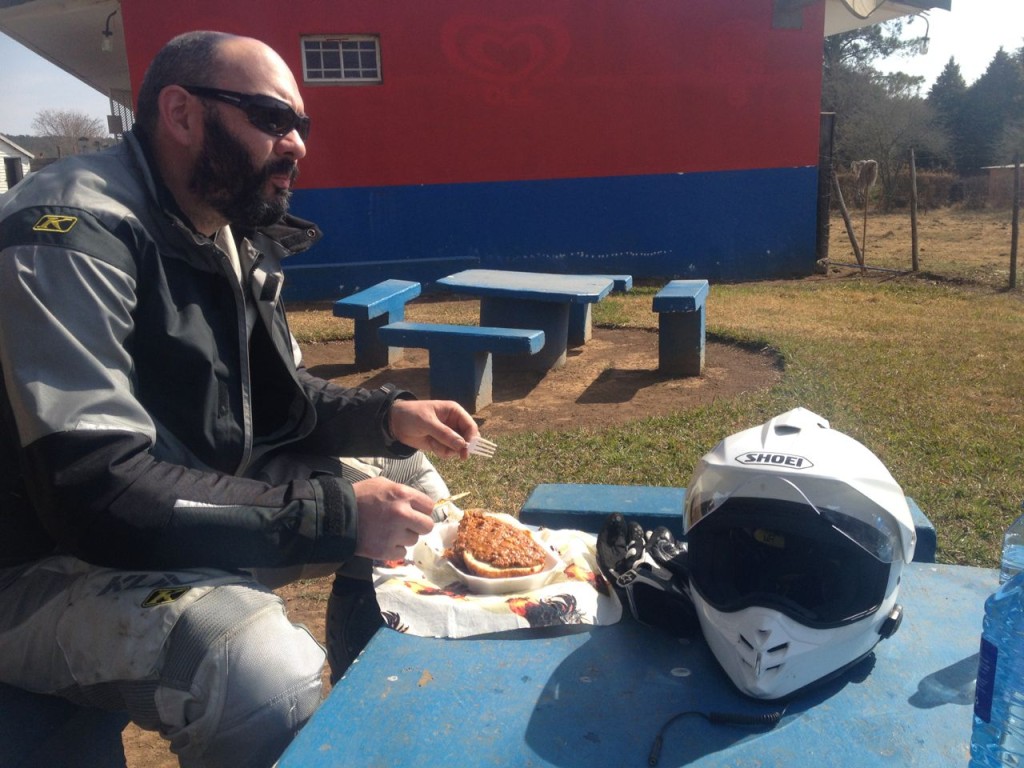 We continued deeper into Zulu Country and the landscape got drier and poorer. The greens of the sugar cane fields turned into the brown of dust covered cattle country, accentuated with the yellows and oranges of various aloes in flower in the winter time. The predominate architecture was small, round stone and brick huts with thatched roofs and small outhouses 30m or so from the single roomed living areas. 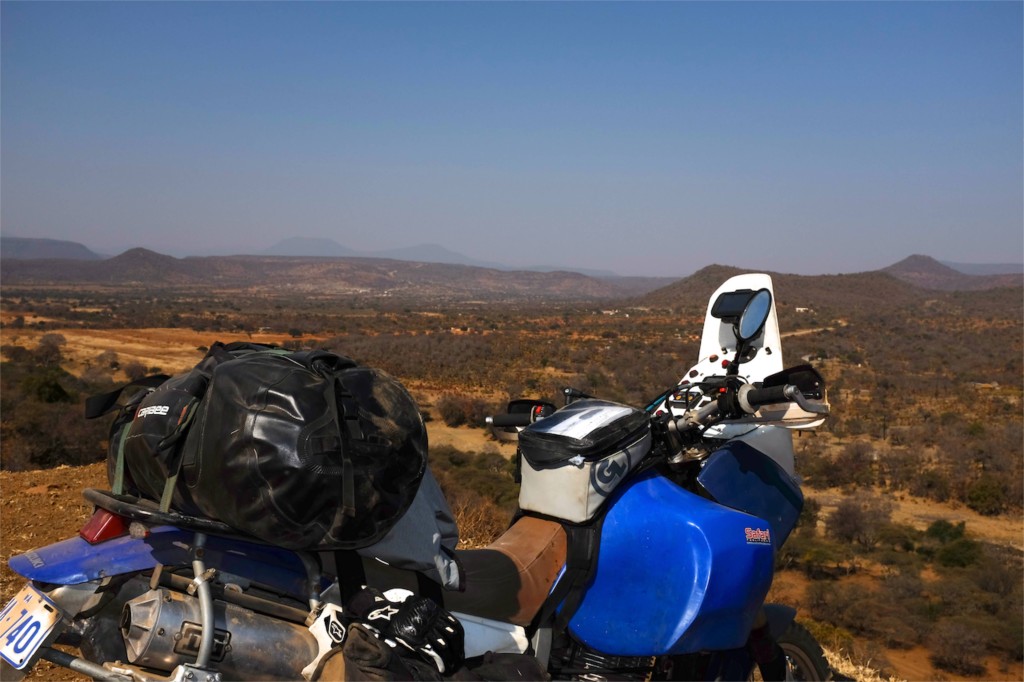 We rode through some small villages and onto a narrow, rocky trail leading up through some Zulu farms and onto the Zingela private game reserve. We continued up the trail, which proceeded to get steeper, rougher and more technical – our overloaded bikes not 4 hours ago in pieces in a crate were eating up the opportunity to hit some rocks and ruts. And that’s when I heard it; high-pitched squeals. Completely nonsensical squeals of delight interspersed with the odd failed attempt to form a coherent word.

Tan was shaking with delight as she went for the camera. A giraffe was only 30m away in the scrub, looking at us suspiciously trying to decide if we were trouble enough to run away from. It stood for a while and must have decided Tanya was far too emotionally unstable so it beat a retreat into the bush, but not before we had photographed it from every angle we could manage. 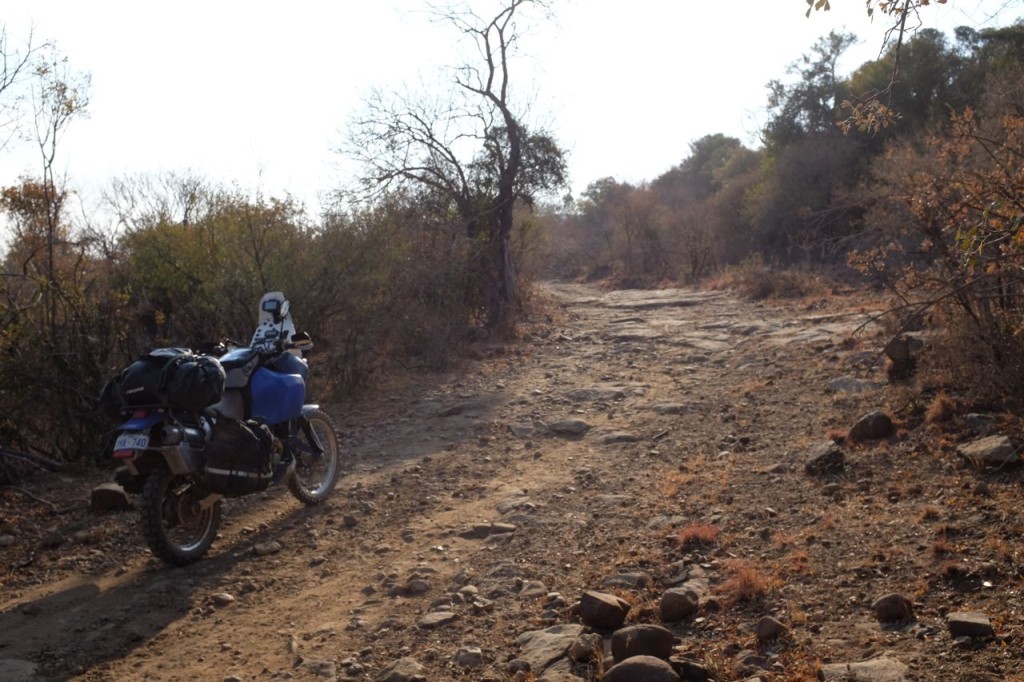 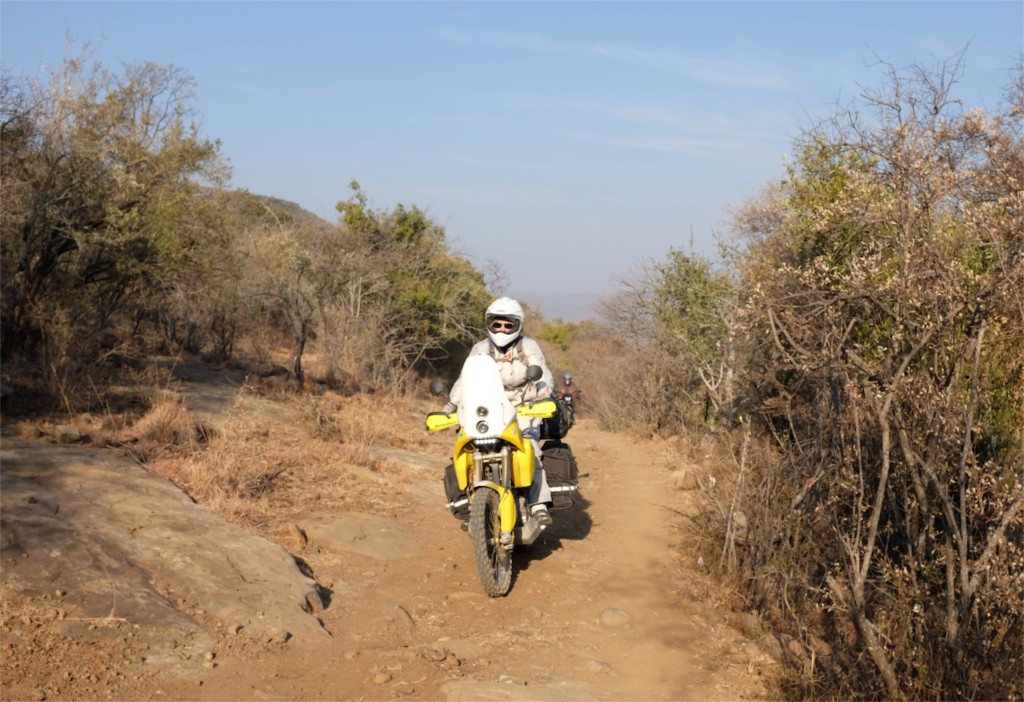 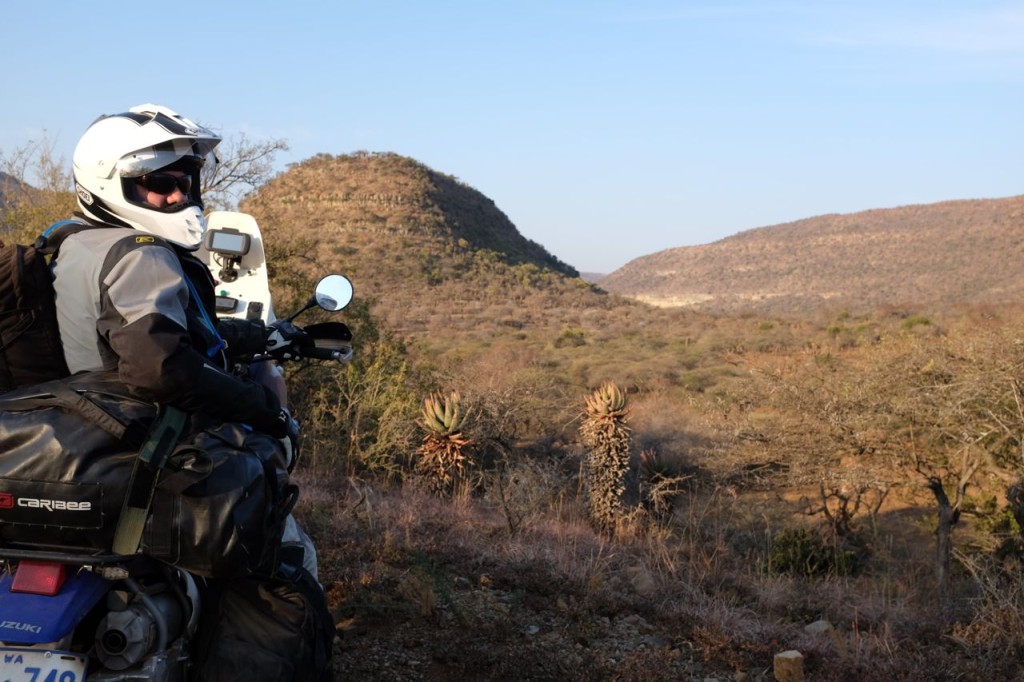 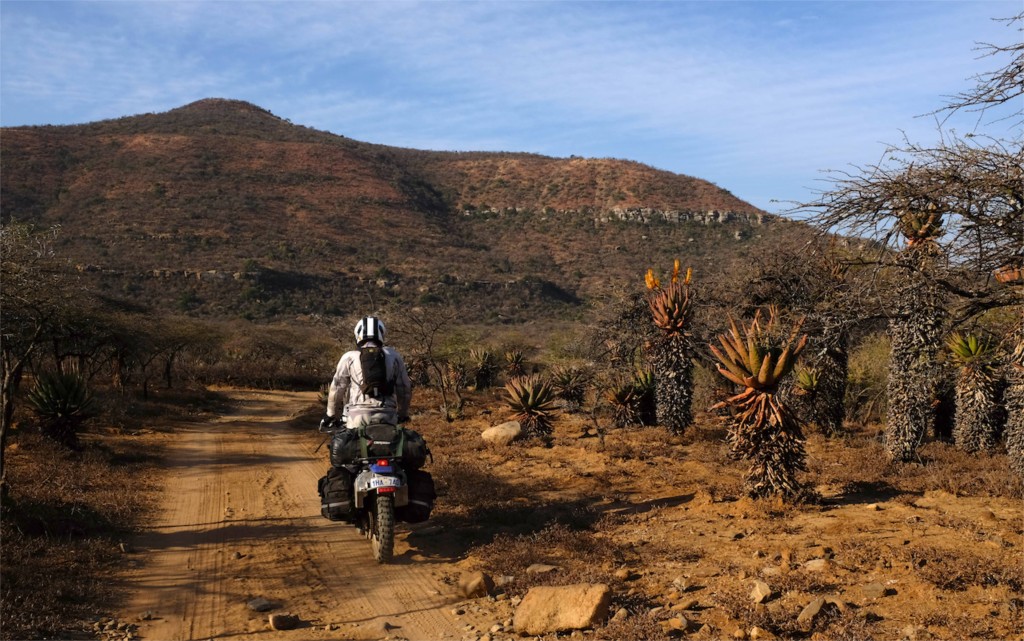 Our first day from there was really a dream; we continued along the fun and challenging rocky trail, spotting Kudu and other antelope, before arriving at the banks of the Tugela River where the Zingela Safari camp is located. We then settled in around the campfire for a number of beers and a great meal with lovely company, before retiring to fantastic open rooms built into the mountainside looking out over the river. 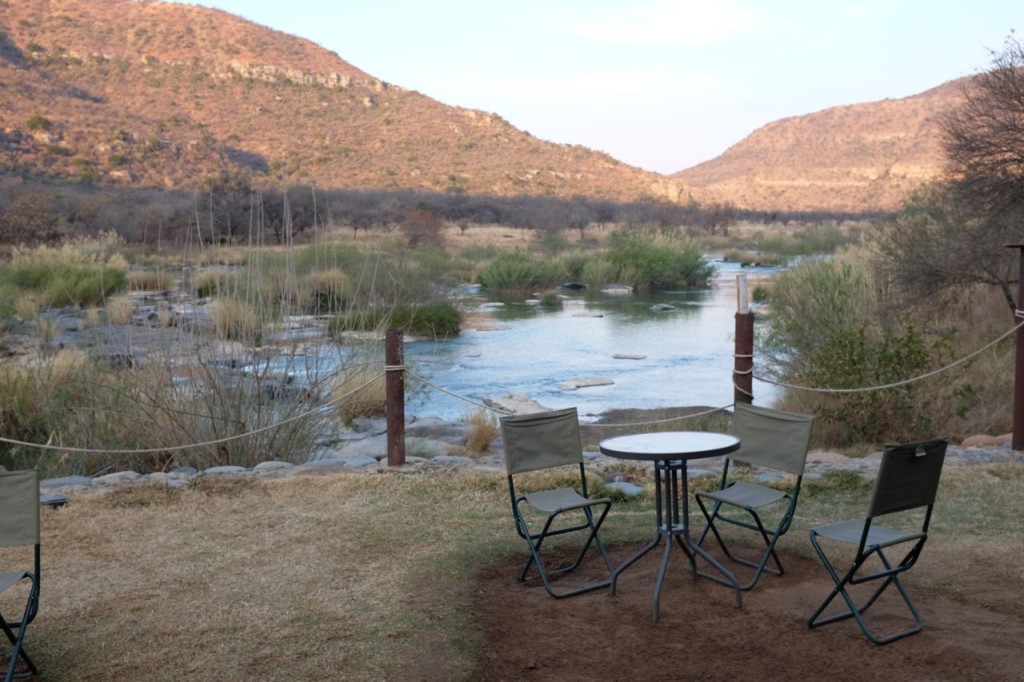 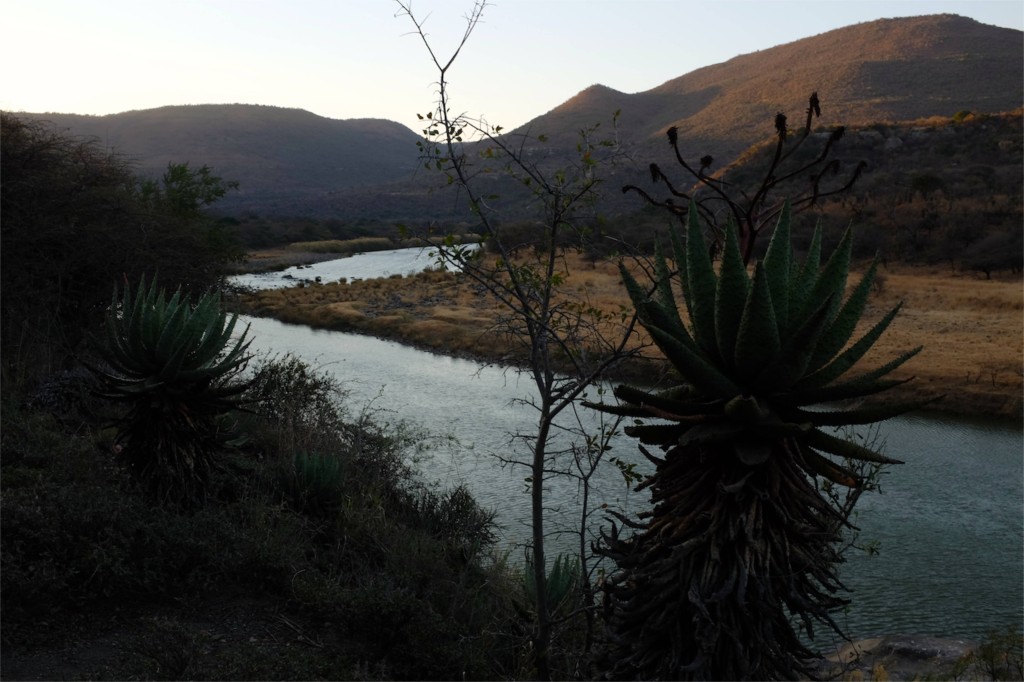 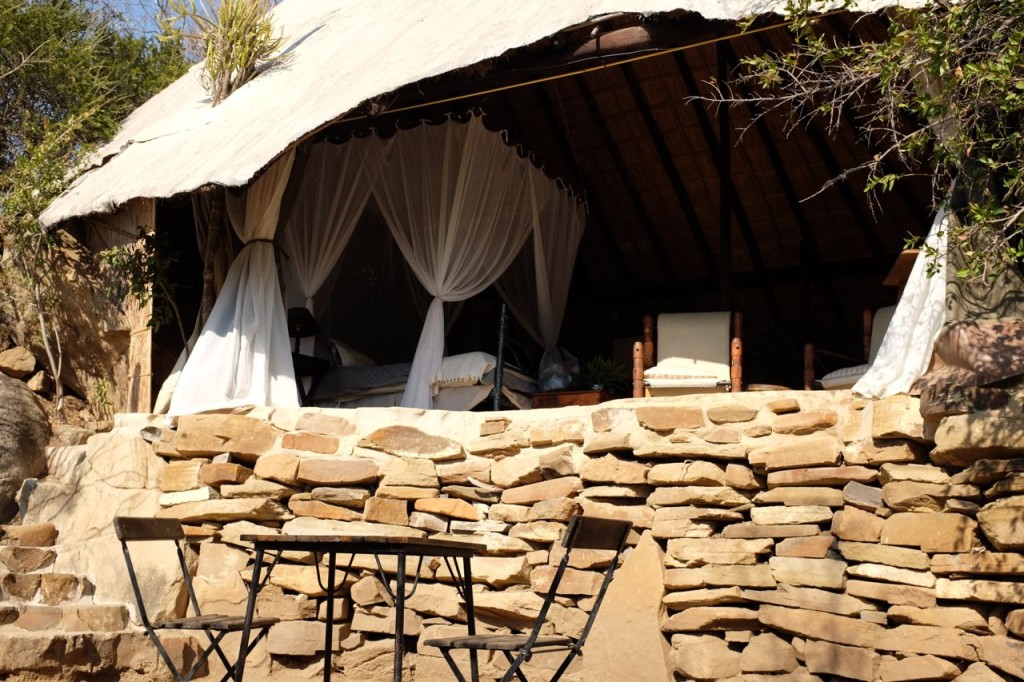 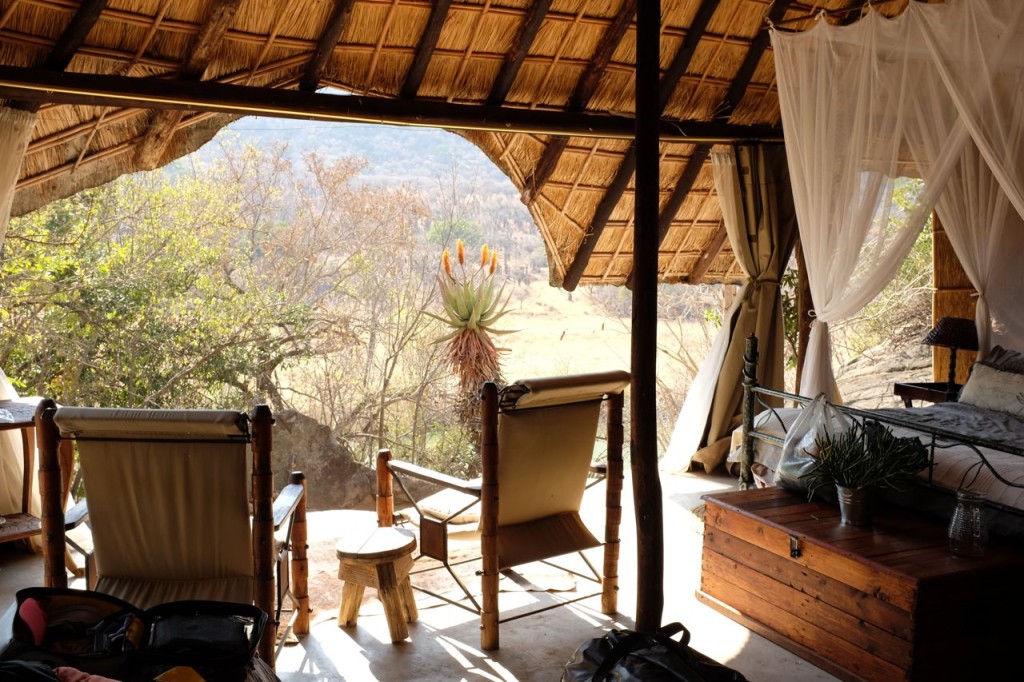 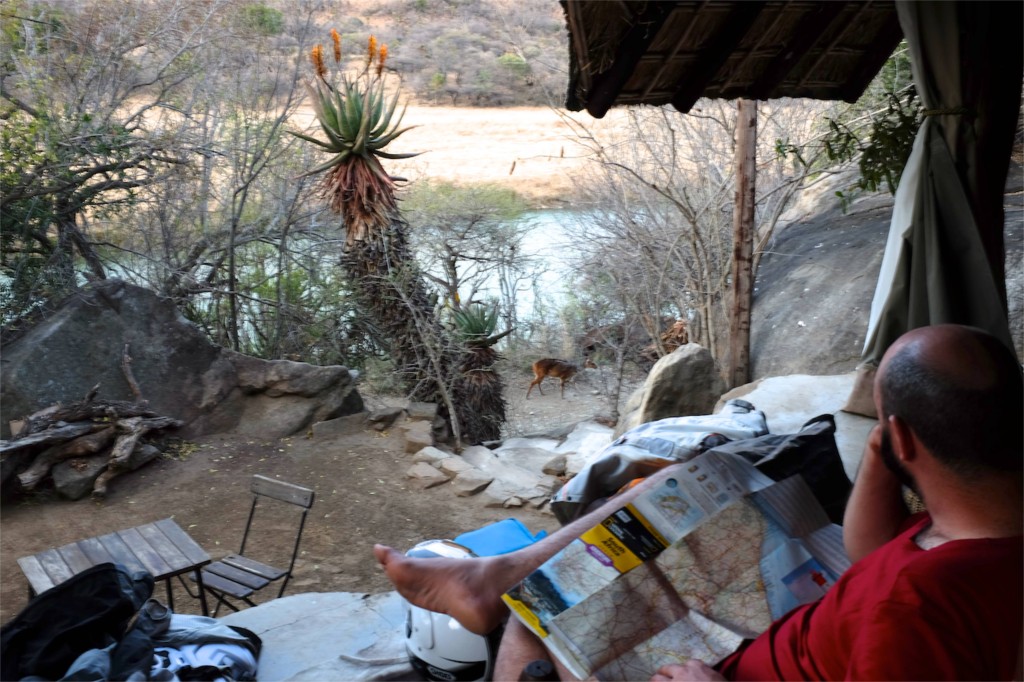