Blog 56 Update by Tan: Omo 10 months later: (yes we are 10 months behind in our blog and yes we are filled with shame)

In the ten months since we were there things have changed quite a bit for the locals. I think we might even struggle to recognise the place.

Just weeks after we departed Dick and Donna were informed they must immediately move the dome and mill towers where we attended church. They were given a week to comply or the structures would be bulldozed for the coming road. It was also announced that the lone shade tree for miles was directly in the path of the new road so would also be knocked down. And the village…that just so happened to be in the way of the road too so everyone needed to clear out.

The moving of the village was not so great an imposition for the semi-nomadic Daasenech and indeed many had already made the move to the delta in a desperate attempt to find areas to plant to avoid starvation during the following year. However, the news of the imminent destruction of the shade tree was a savage blow. Donna was struck by the callousness of it. These people have so little in their lives in terms of a physical footprint or belongings and even a cursory glance at our photos will show miles and miles of empty space. But the road just so happens to run through the tree where everything of consequence to the Daasenech goes down. To even break a branch of that tree is punishable by and enthusiastic beating.

It seemed unnecessarily cruel and all to satisfy the cost and effort savings of a straight line for the highway. The plan was most likely concocted on a computer working from satellite imagery. A couple of clicks on a sophisticated software program would have determined the optimal design to minimise the distance. The presence of a single tree and the significance of that tree would never have come into the equation. And perhaps would not have mattered if it had.

The road surveyors had been out and done their surveys long ago but nothing had come of it. All of a sudden it was upon them. The road surveyors had actually used the foundations of one of the windmills as a survey station because it was the only suitable fixed point that didn’t require hammering a peg into the ground. And for that the mills, dome/church, village and tree ended up on the chopping block. With little notice and minimal assistance Dick carried out the huge task of dismantling and removing the church, mill frames and their concrete foundations. They are there no longer. 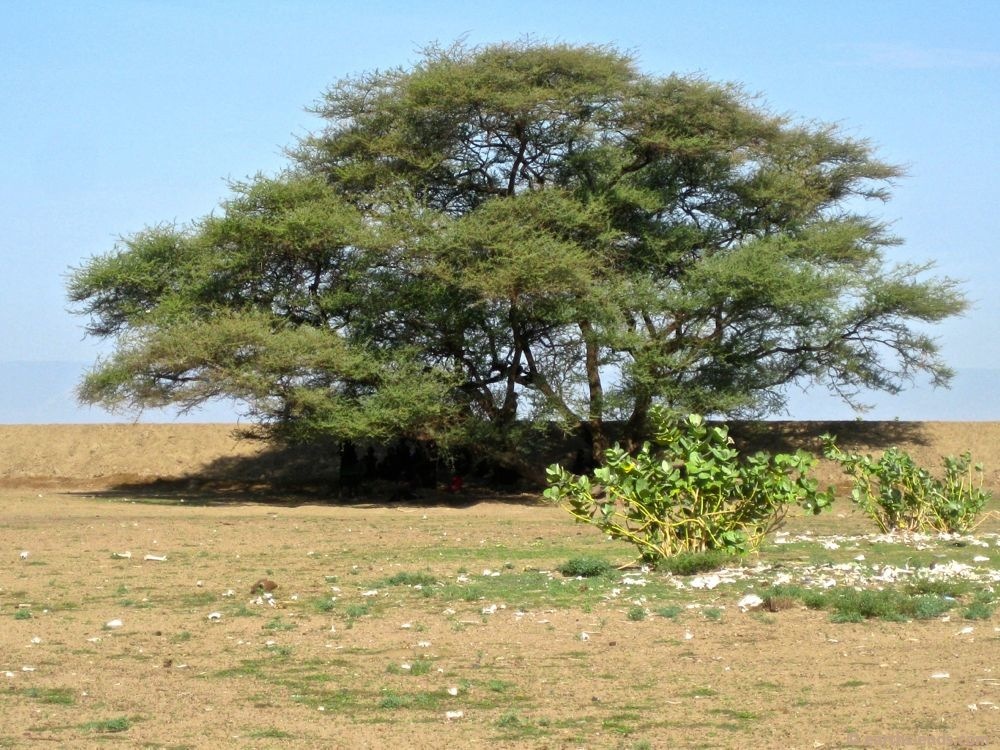 The tree (or at least most of it) survived thanks to a bit of people power. Go Daasenech!

In regards to the tree we were delighted to hear that the Daasenech organised and protested the cultural significance of the tree and its need for protection. In an earlier blog we discussed how a group of Daasanech had once organised to demand the filling in of a large hole outside Omorete. They protested on the grounds that they kept falling into it when walking home from town drunk. The tale is both amusing and encouraging. On both occasions that Daasenech advocated for their own interests and succeeded. In the case of the shade tree they were able to affect just one side of the tree being taken down. The rest is intact and lies at the base of a 5ft high raised highway awaiting tarring. The work was no doubt carried out in part by the kind Chinese road crew we met north of Kangaten.

The village in our photos is also no longer there as it has been replaced by the commanding presence of the raised highway. The highway to nowhere. Fortunately for some, the people who held out the longest before moving were granted a pay out of about $160 per house.

With the dome no longer serving as the church Dick threw a church building together with odds and ends he had lying around such as old water pipes that he used for the supports. Pews are logs pulled from the river. We were not surprised to see how great a job Dick has done on the place. You can see in the photo a large turn out for church. It seems uncertainty of the future has led to more Daasenech than ever converting to the Christian faith. Recently 40 people made the decision to be baptised. 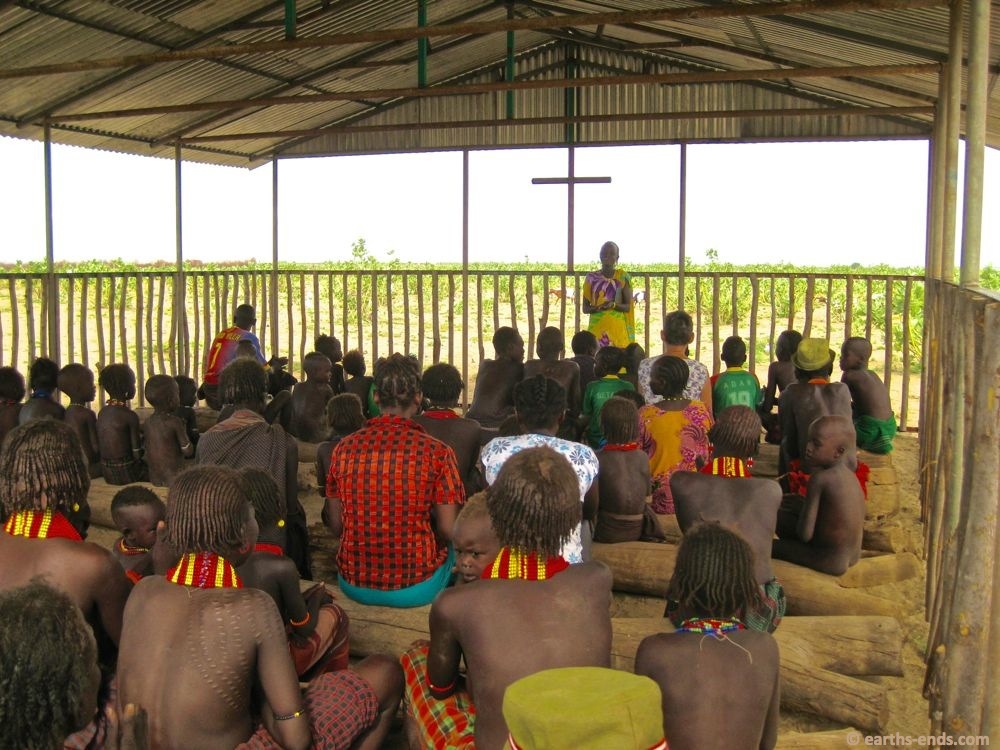 The flood never did come last year, which I guess made the predictions of the witch doctors correct when they said “if it doesn’t flood in within a month, it won’t flood.” I wonder if they do lotto numbers – “if 16 doesn’t come up, it wont come up” they’ll say. I can make fun because as a mine geologist, such non-committal language was my bread and butter, only it always went “based on the current interp….” Many times have I said something like: “If we don’t hit mineralisation by 90m with won’t hit mineralisaiton.” Turns out I’m not a rock doctor. I’m a rock witch doctor.

At one stage the water rose to near flood levels. Donna didn’t know the reason for this, it could have been that something was wrong with the dam or perhaps unusual levels of rain around Arba Minch. The unfortunate consequence of this ‘near flood’ is that the Daasenech may still be hanging on to the hope that what everyone is saying isn’t true and that life will return to normal.

At another stage it looked like unseasonably high amounts of rain would grant the poor people of the Omo Valley a slight reprieve. Yet in the end the rains proved insufficient to allow for much planting at all. There have been some government grain handouts but not enough to make of a difference.

As was expected conflict between neighbouring tribes has increased as grazing and planting land become more scarce. Donna speaks of monthly clashes between Turkana, Daasenech and Nyangatum.

In less grave news, Tan and Mick, the hens named in our honour, continue to lead a happy existence at Omo. Turns out Hen Tan is a little over the hill so Hen Mick is the better layer of the two. I am oddly disappointed and Mick is oddly chuffed. 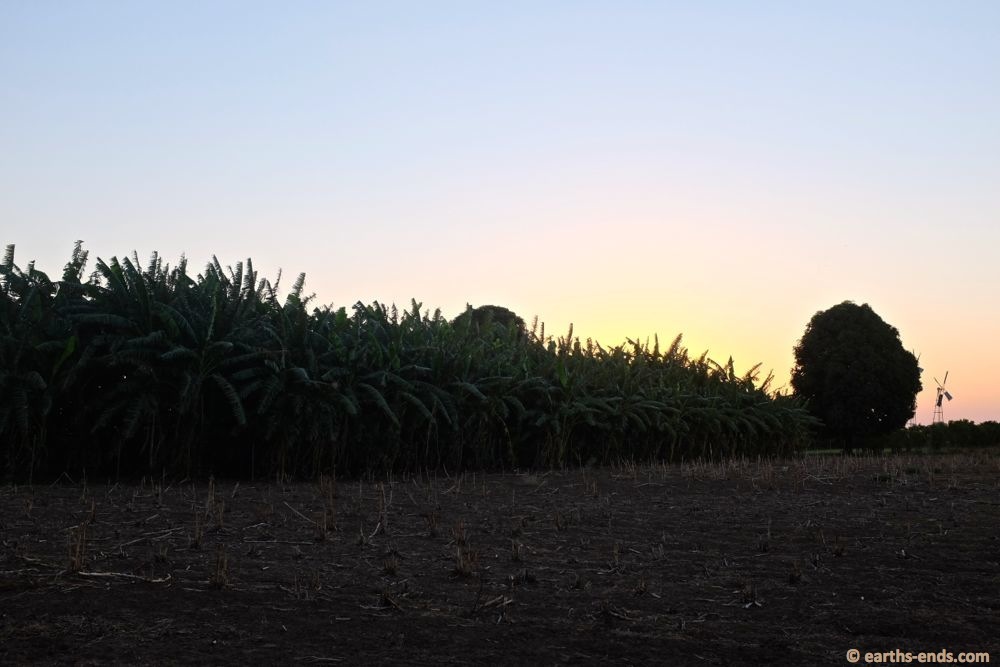 The Future of the Project

They say life is all about timing. Dick and Donna have been constructing windmills along the Omo since 1996. It was around this time that the idea for the dam was first being floated by international development agencies. Who could have known that the ambitious $1.8 Billion project would go ahead and in so little time. Now after 20 years of hard work constructing windmills, Dick and Donna find themselves approaching retirement at a time when the windmills have never been more necessary or in demand. Dick now needs to focus on the longevity of the project and its ability to sustain itself without their presence. He has stopped windmill construction and is instead focusing on the maintenance of the present windmills, which is presenting a challenge.

With the low water levels resulting from the damming of the Omo Dick has found himself busy installing longer intake hoses on all the windmills. It remains to be seen if the river will drop too low for even the new intake pipes and exceed the suction head of the pumps. I would shed tears were I to learn the river had fallen too low for the windmills to work anymore. Only time will tell.