In the Shadow of Moshoehshoe

Blog 6 by Tan: In the Shadow of Moshoehshoe

After entering Losotho we headed straight for Katse Lodge overlooking Katse Dam, where upon entering we were greeted with a glass of fruit juice complete with coloured sugar around the rim, offered up on a silver tray. The sugary drink served to replace the energy expended on the ride in and also to reinforce the point that we had almost certainly arrived somewhere outside our budget. We winced at the cost of $50 per person for their cheapest room, a twin room with shared bathroom in to old dam builders barracks. But having drank their commitment-juice and bought dirt and their lobby we felt obliged to stay. Turns out the price included a pretty excellent 4-course dinner so between that and the views over the dam we couldn’t complain.

The next day we did a tour of Katse Dam which had us taken from the top to the bottom of the wall and all the way into it for a couple of hours for the grand total of $1 each. The dam was pretty impressive to behold at 185m high and 60m thick at its base and Michael seemed to have enjoyed getting an engineering fix. 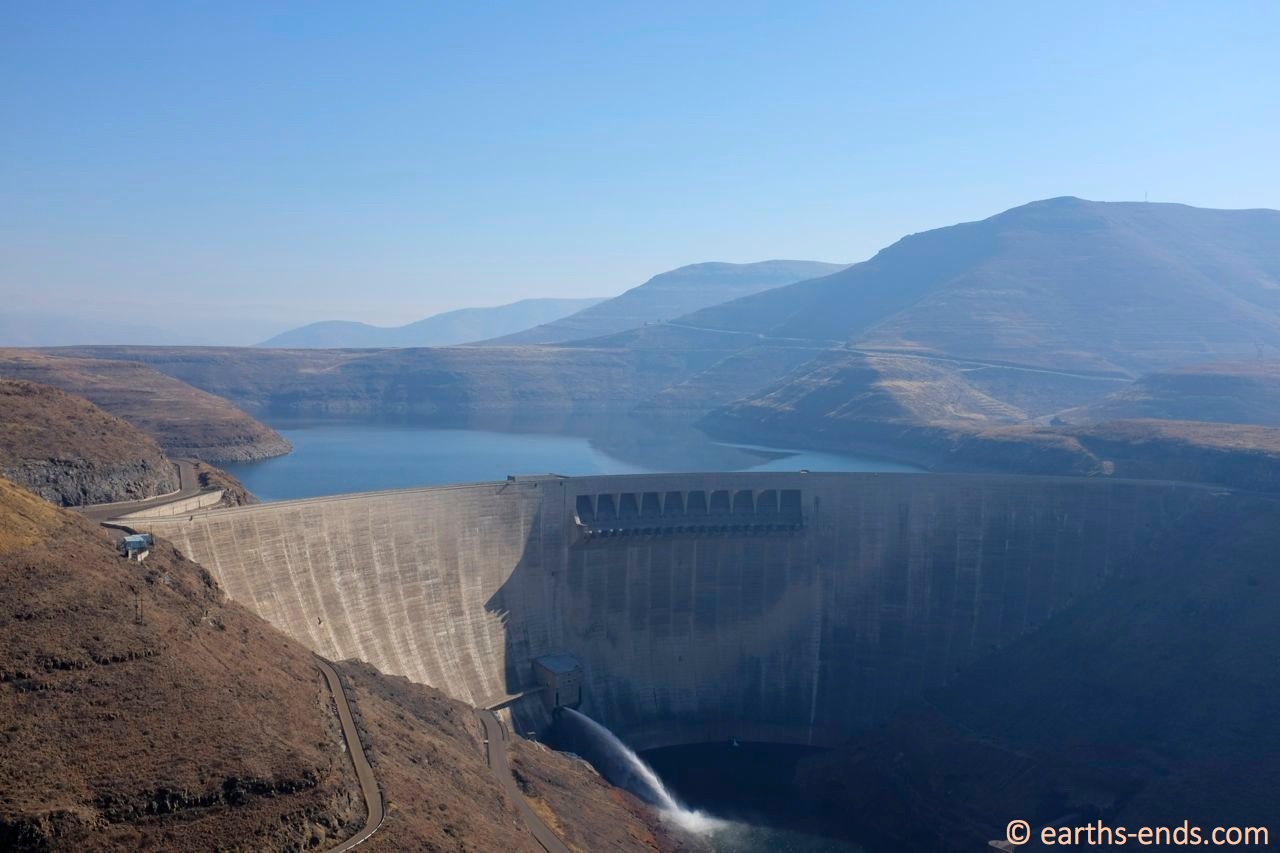 Photo of Katse Dam taken before embarking on our $1 tour

It turns out that Lesotho’s biggest industry is water, which it sells to South Africa along with the bulk of the electricity generated. This naturally upsets people a bit and looking at the photos in the blog you’ll get a sense as to why. Lesotho struggles with water shortages and semi-regular droughts. In fact, no water has gone over the dam’s causeway for three years. And if I had a dollar for every time I saw someone traipsing up a mountain with a bucket of water of their head I’d have enough to stay in the fancy rooms at Katse Lodge for month. People complain that the government sells off resources the country needs, pockets a lot of the proceeds and fails to put any of the money back into improving the lives of the locals. That old chestnut. For all the beauty of Lesotho there is no kidding oneself that it would be an easy place to live. Life in Lesotho even from the back of a motorcycle seems bloody hard. The only thing that would make me choose to live life on the land in those mountains would be to escape marauding bands of murderous Zulu, which was, incidentally, the reason why people moved up here in the first place. 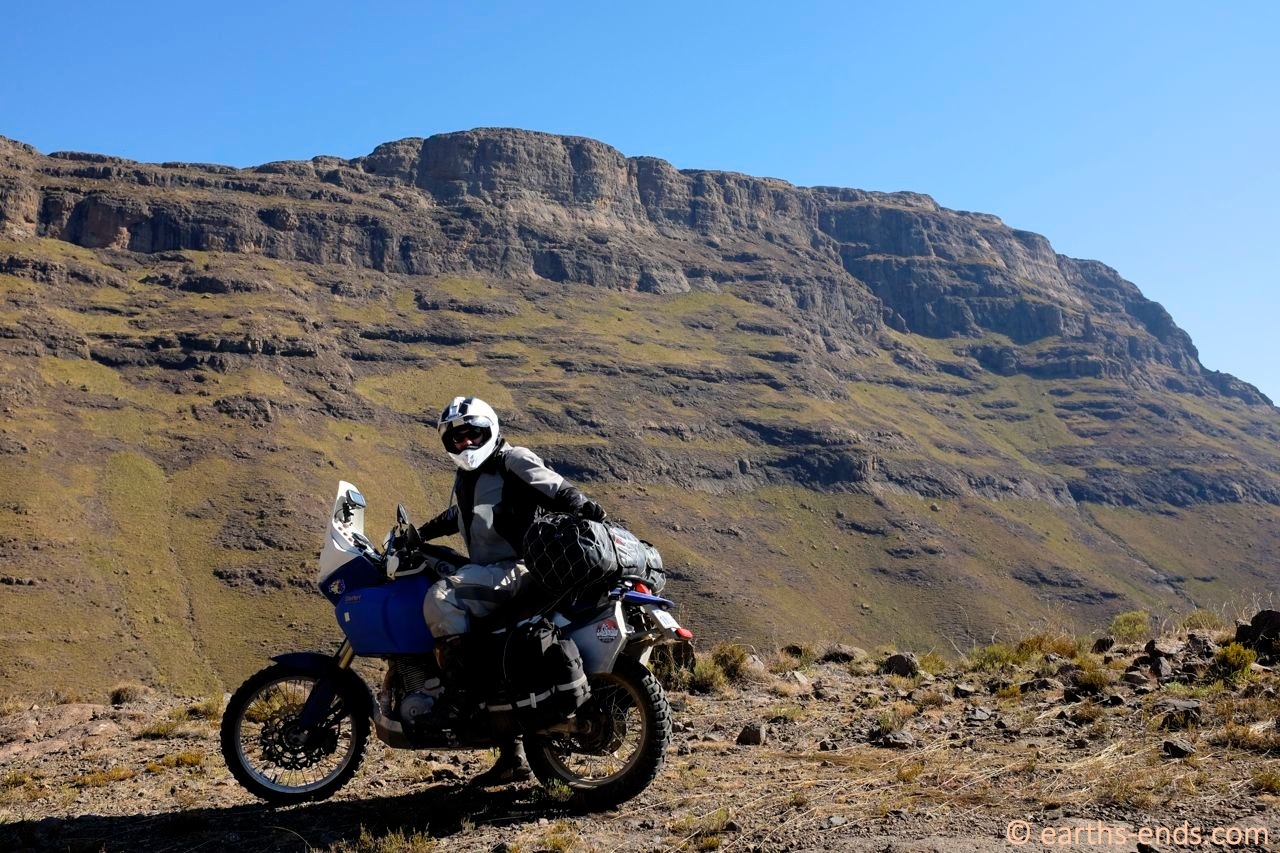 The story they tell in Lesotho goes that the people that went on to form the Basotho nation got sick of being near annihilated by the Zulu who were by all accounts pretty terrifying in a fight. So to the mountains they fled. The leader of the Basotho people was a guy blessed with the inordinately cool name of Moshoeshoe (mo-shweh-shweh). Moshoeshoe wasn’t at all into war and employed the ‘can’t we all just get along’ style of rule. He united the warring clans, giving everyone land and cattle. He was the forgiving type too, even when it came to cannibals who ate his granddad. A Basotho lady told us how, upon catching the anti-social cannibals who dined out on ol’ granddad, he gave them some land and cows and told everyone else to be kind to them and show them how to fit in to a peaceful, not so human consuming kind of society. I suppose that was what he had to do with the cannibal misfits in absence of an island territory like Tasmania to exile them to like the Australians fortunately had.

Our visit to Lesotho coincided with a bit of a military coup type situation that made it apparent that Moshoeshoe’s reported peace loving tendencies were not inherited by the contemporary leaders of the country. But we’ll get to the coup in the next blog.

Yet another incredible mountain pass

After Katse we travelled the amazing mountain roads to a town called Roma where we stayed for a few days of rest and relaxation. While sadly the roads were all tar they did come with the extra challenge of having no lines or road markers. On dramatic, windy mountain roads like these, it made for some rather abrupt and exciting decelerations around sharp corners overlooking what would be a scenic though guaranteed death. While staying in Roma we met a couple of young German kids who were at the beginning of a year’s stint working at a community centre. Through them we learnt about some of the harshness of modern life in Lesotho. Riding through the country we had seen what seemed to be a disproportionate amount of funeral parlours for a country of it size or any size really. It seemed that at least 1 in 3 businesses outside of the capital were funeral homes (most of the others are liquor stores or taverns) and they were certainly the most impressive looking structures in most places. Death it seems, is big business in Lesotho. The AIDS rate here is approximately 25% which makes it third highest rate of AIDS in Africa with Swaziland and Botswana ahead of it – granting the tiny kingdom a bronze medal in the world’s shittiest contest. It certainly fits with what we were seeing as we rode past small villages. You would see plenty of children and a few older people, especially older women, but the middle generation was conspicuously absent. They have lost an estimated 200,000 people to AIDS related illnesses reducing their population to just 1.8 million. Sad stuff and especially disappointing considering the huge number of NGOs in operation in Lesotho. Lesotho is 80% Christian and it seems this fact has contributed to the large scale of foreign and especially American charities operating in the country. I was told by a guy working there that there are more NGOs per capita in Lesotho than anywhere country in the world. I’d believe it.

Mick surrounded by enthusiastic children – clearly in his element 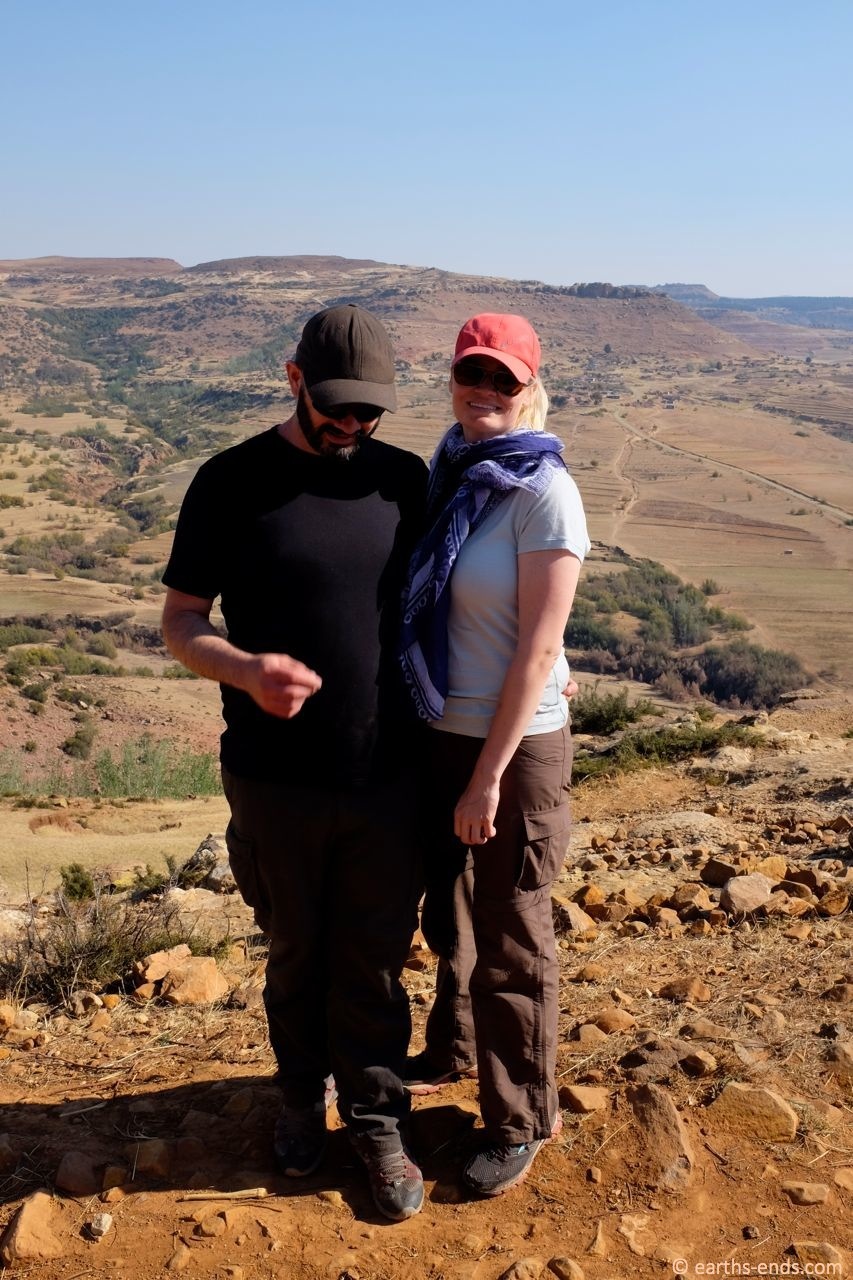 We joined the Germans for a walk with the kids from the community centre to see some dinosaur footprints which seem to be all over the place in Lesotho. Most of the footprints are said to be about 180 million years old and most of them are just sitting there without any signage or commercialisation. We hiked up to the top of a nearby hill with the kids. One feisty little guy informed Michael that he’d be sitting on Mick’s shoulders for the duration of the hike and Mick, figuring him to be a tenacious fellow, judged compliance as the easier path. 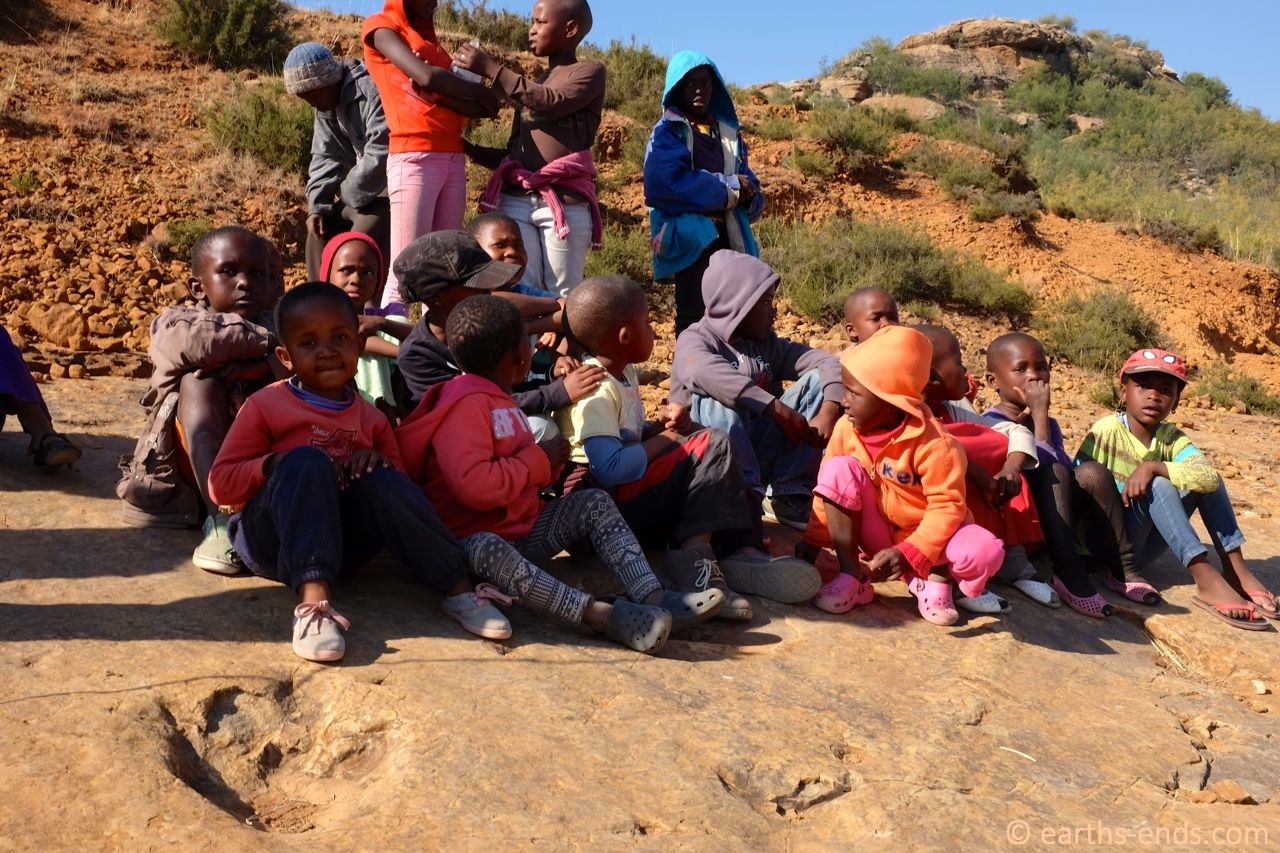 So children – much cuteness 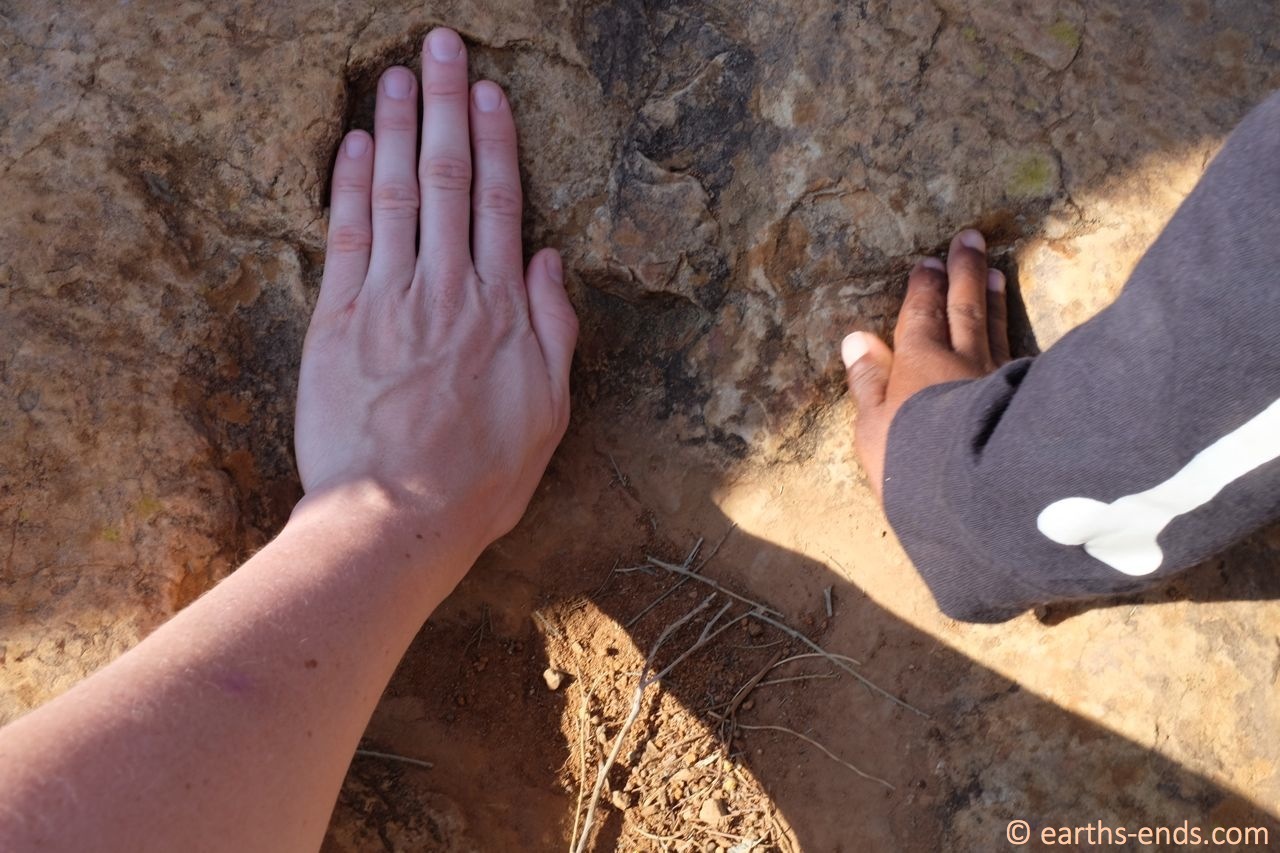 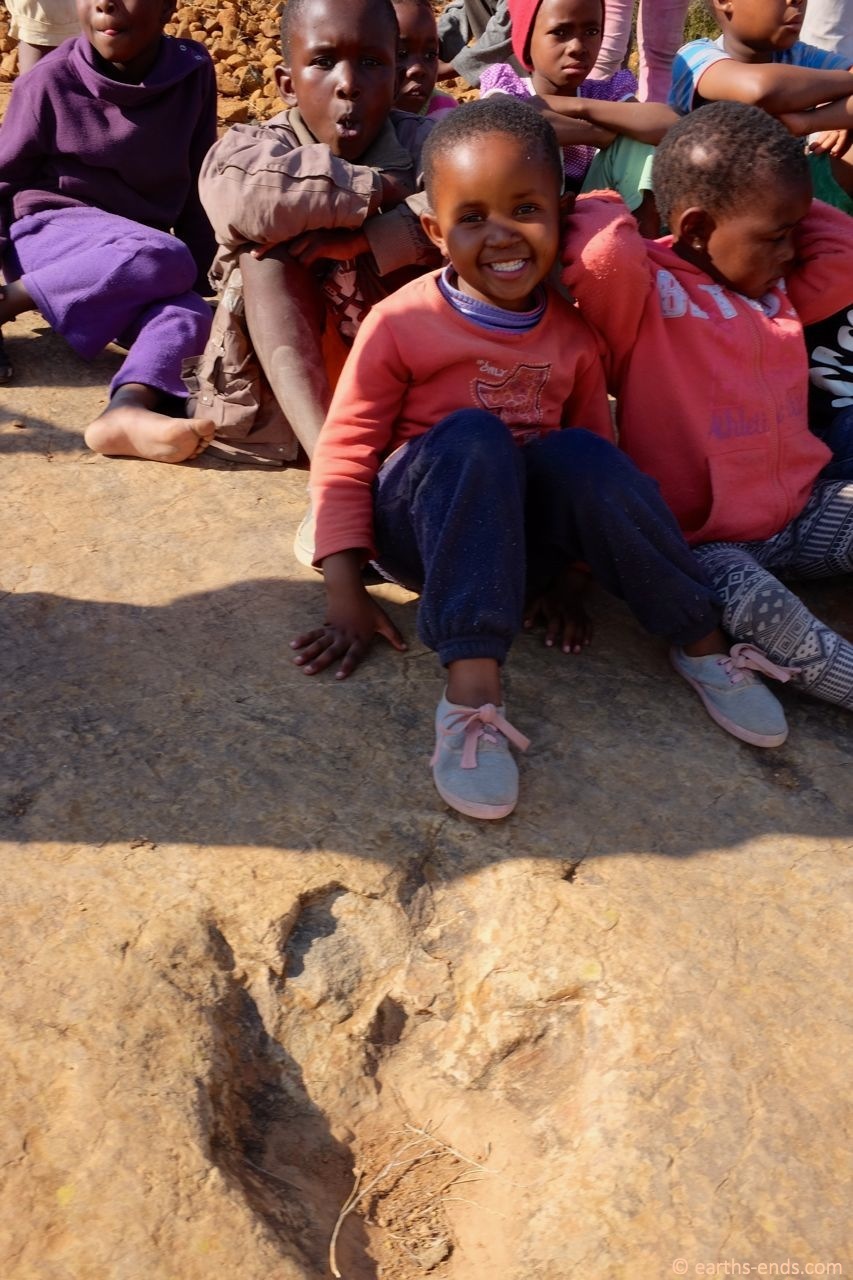 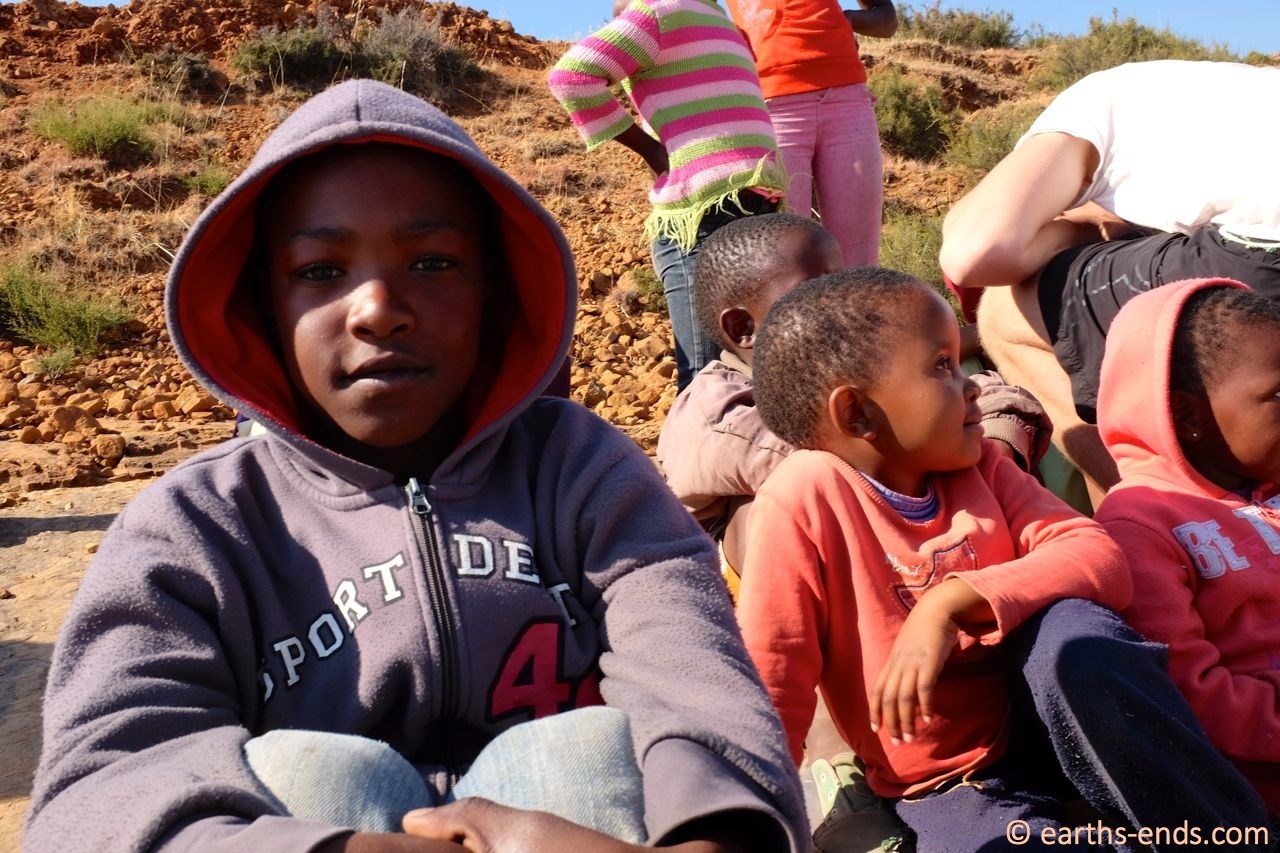 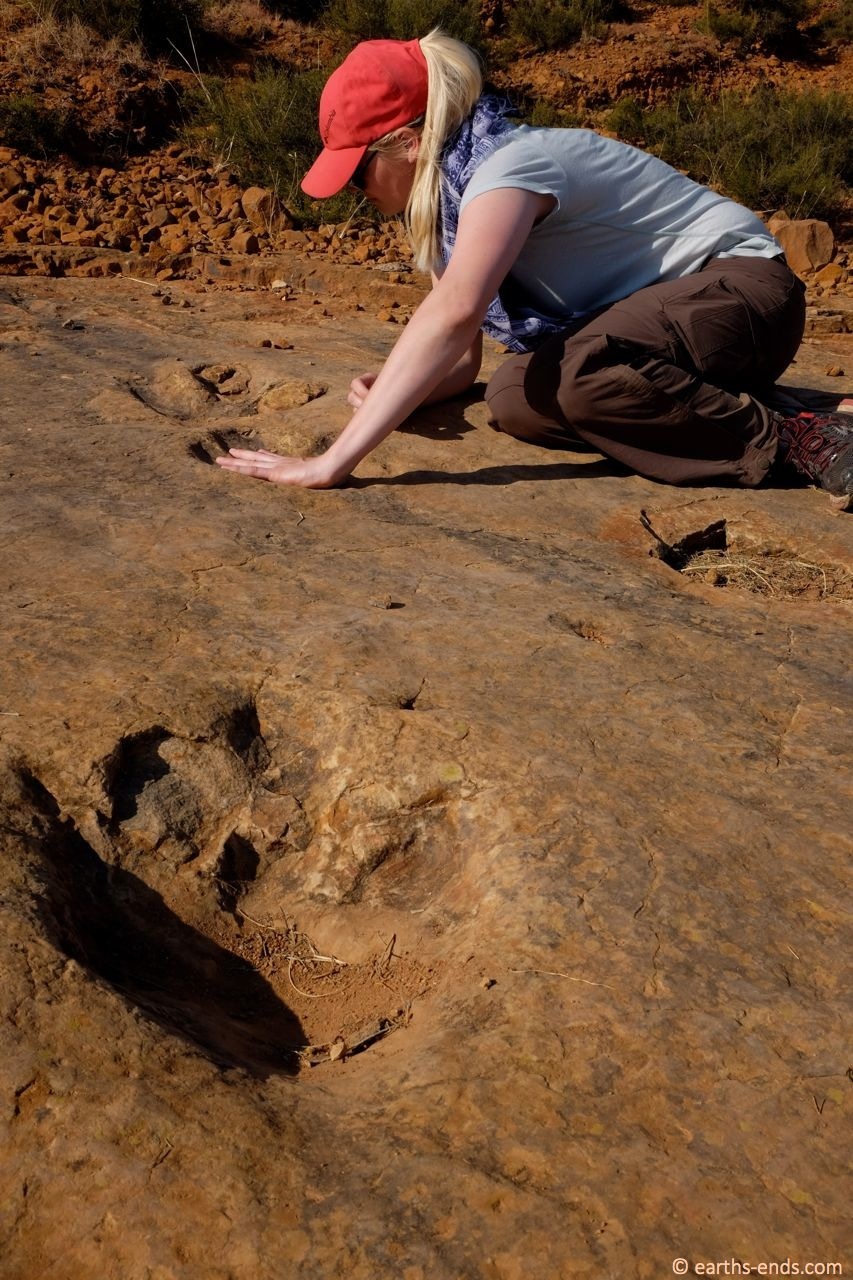 Yep, these were defiantly not made by humans

Earlier in the week we had heard about an enduro race that’s held in Lesotho every year called the Roof of Africa. Turns out the guy who owns the place we were staying is heavily involved in route planning for the race. Ashely’s family had been living in Lesotho for 5 generations and had the admirable passion for growing the country’s profile in tourism terms. He has the idea of building a world-renowned trekking route through Losotho modeled on the Annapurna/Everest base camp like treks of Nepal. An awesome idea. 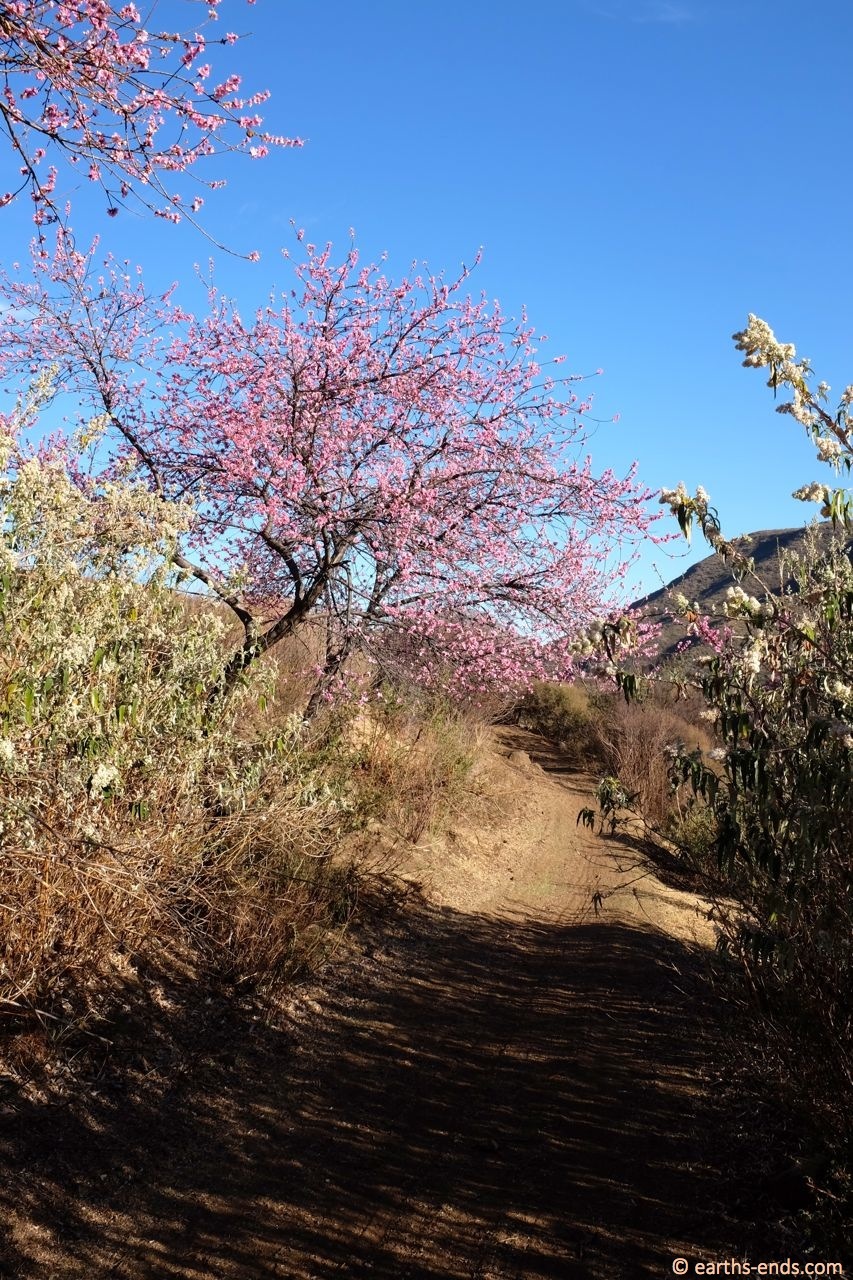 Peach blossoms were in bloom all over the place in Lesotho

Seeing our interest in the Roof of Africa he offered to take up along to scout out some of the possible trails for this year’s event. We jumped at the chance to go scope out some of the trails with him. The Roof of Africa (the Roof) is known as one of the most extreme enduro events out there. After checking out some of the routes for this year’s event I am not at all surprised by this. Nasty, steep, never-ending, whole other level of rocky, rocky trails up and down mountain sides. Absolutely gnarly hellish looking stuff. On the right bike and almost certainly in retrospect, it looks like it would be a lot fun. From the looks and sounds of things this year’s event is going to be a killer. It starts 3 December for those interested. 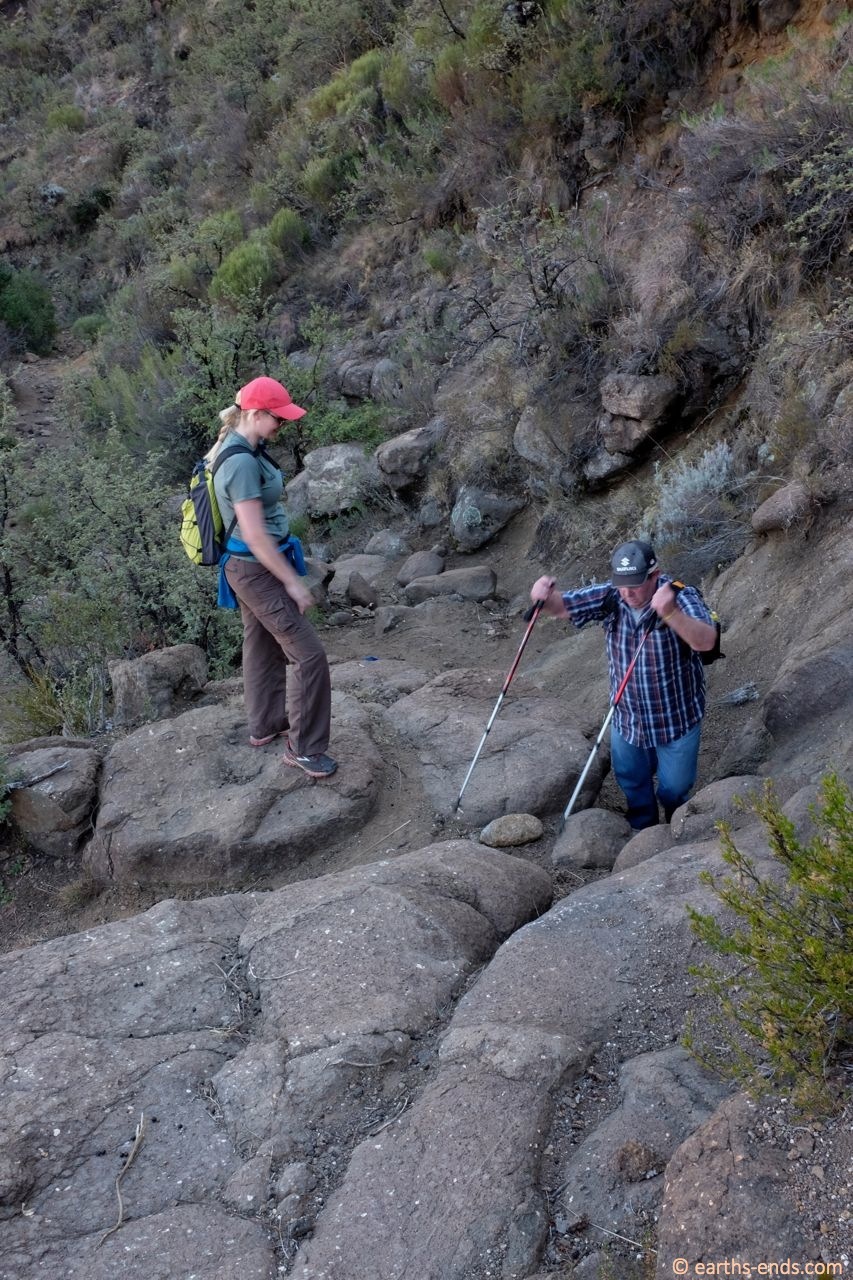 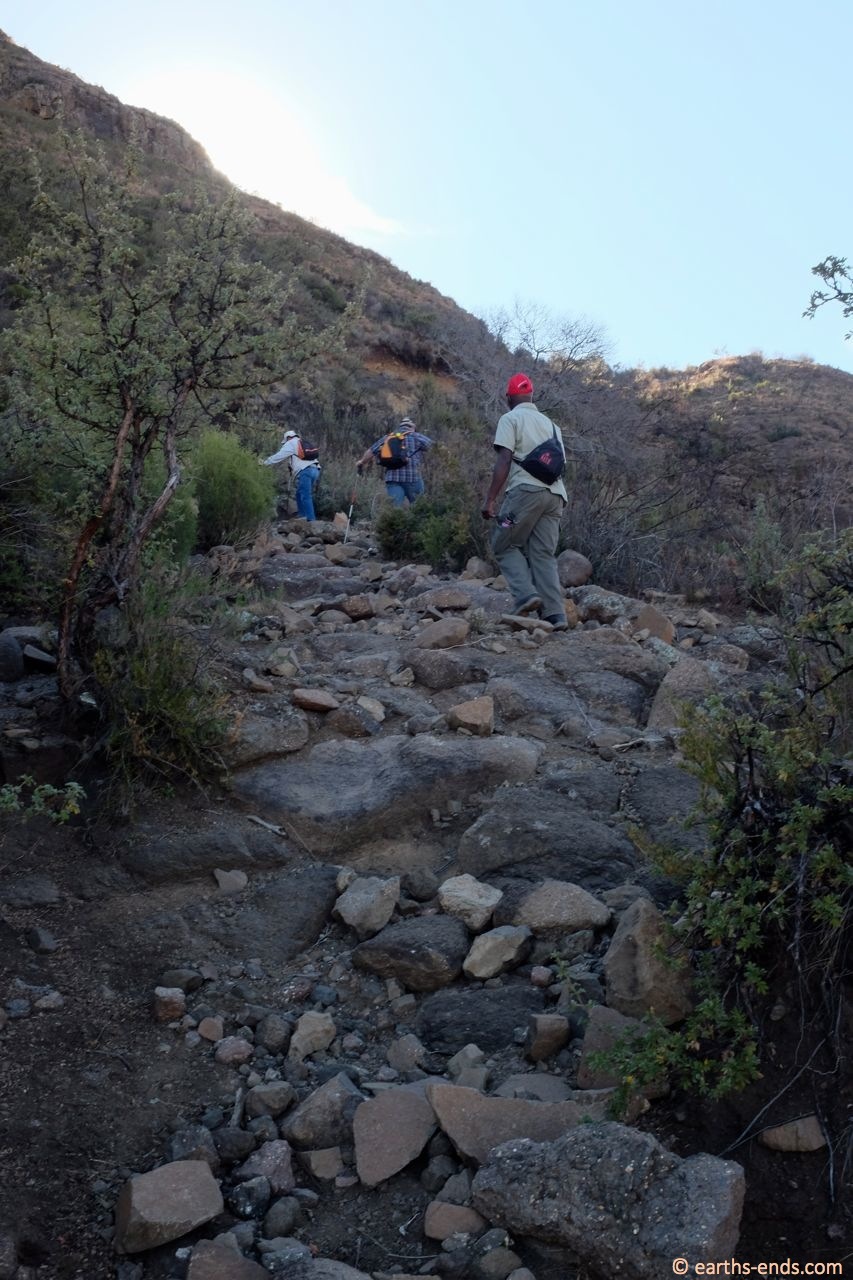 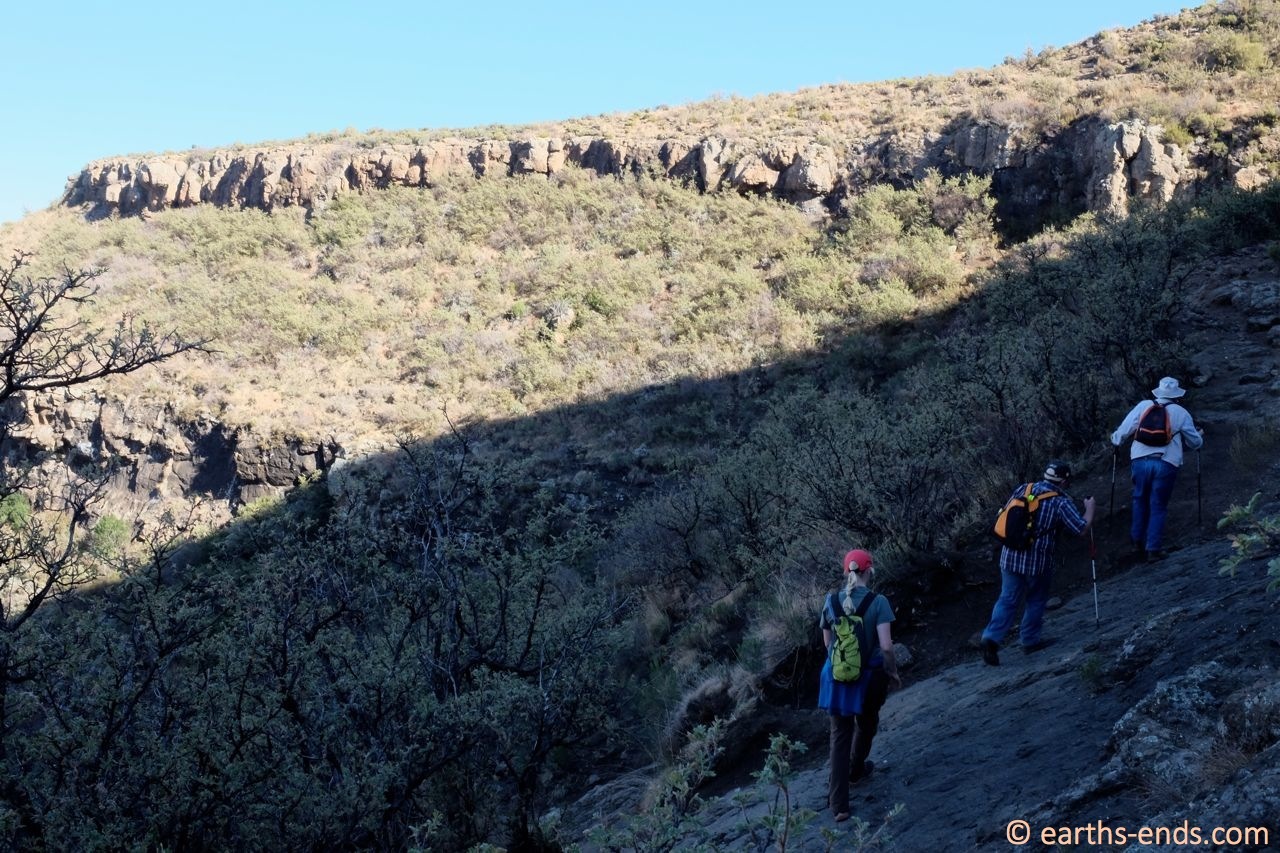 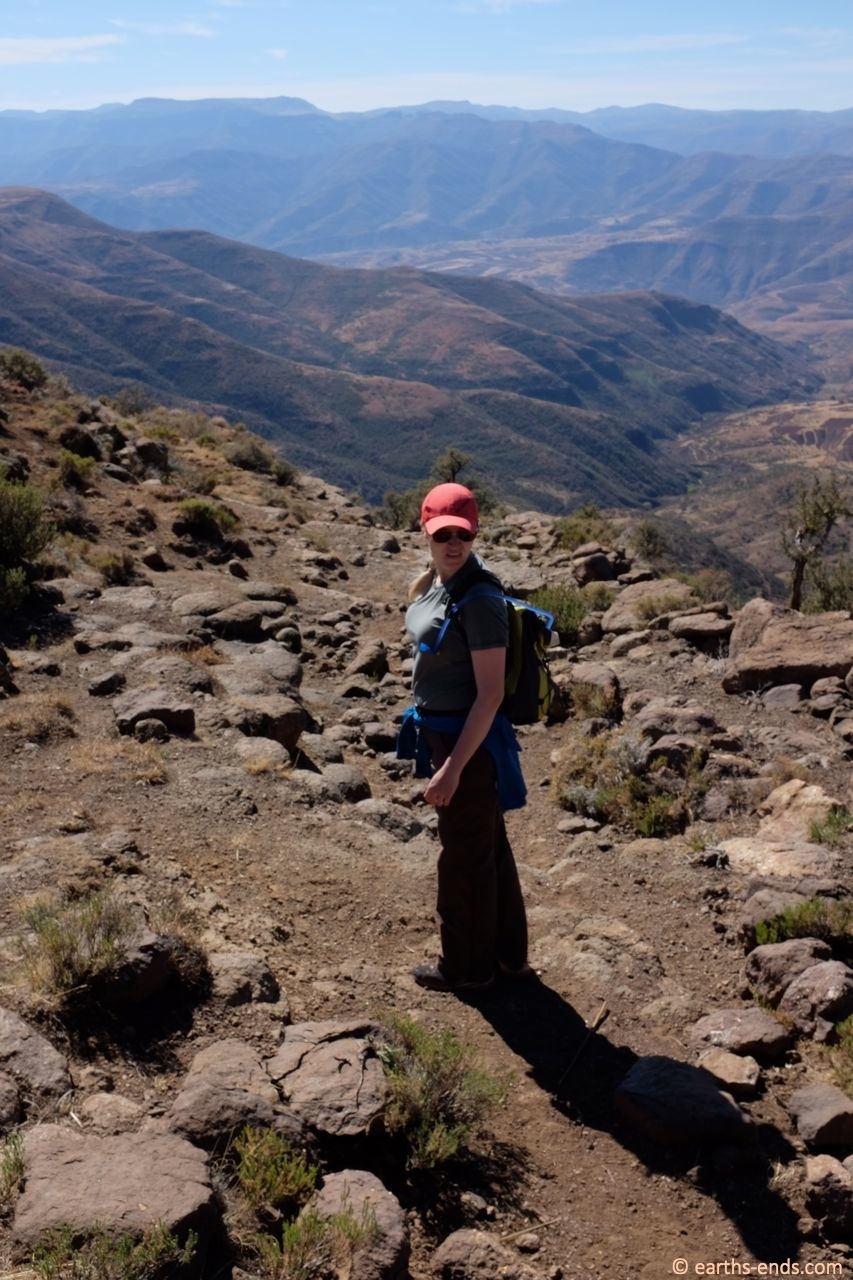 With the routes for the bronze, silver and gold categories for the Roof largely sorted out we made our way back to the car – thoroughly knackered

Country in desperate need of rain 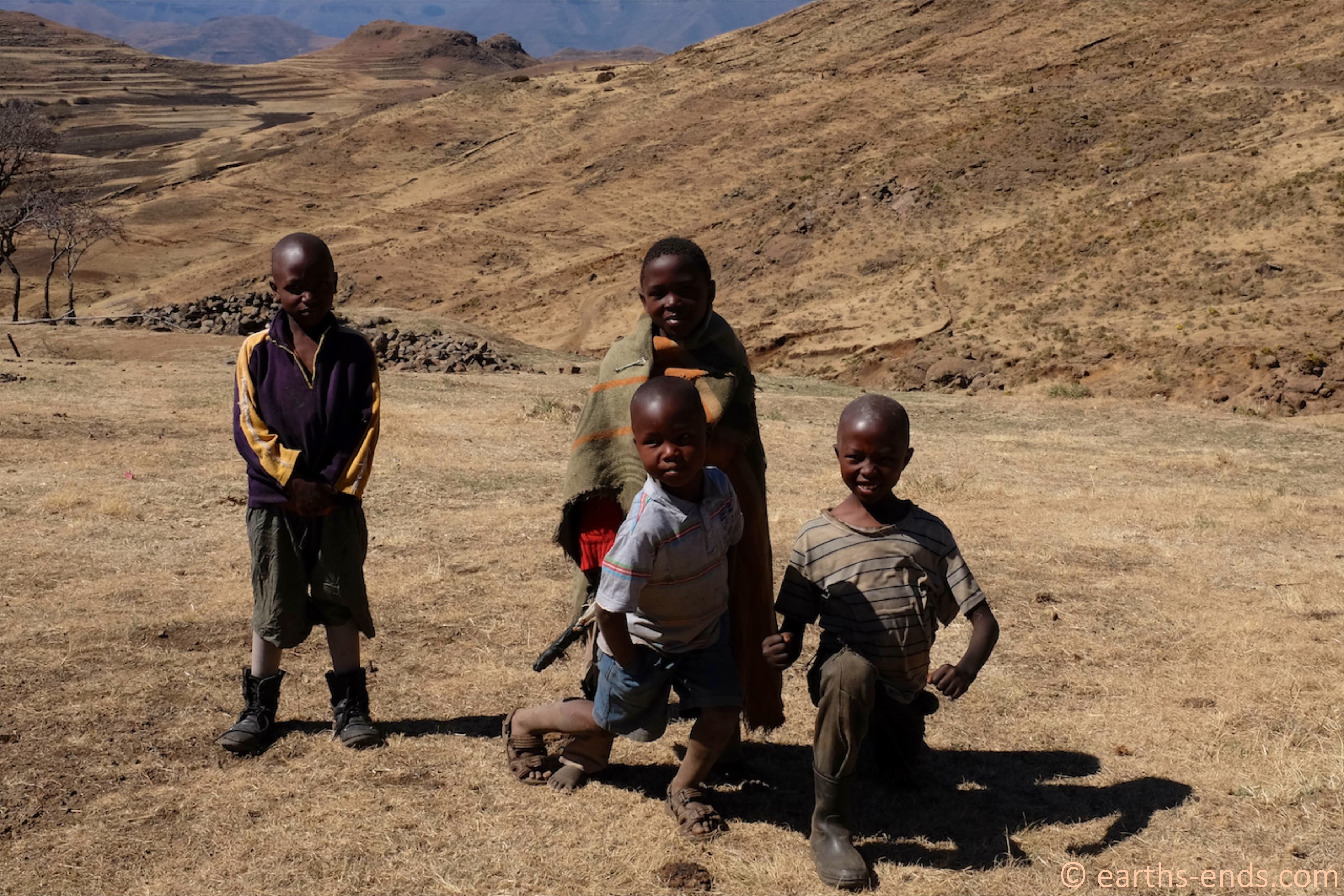 Another one of the guys in charge of route finding for the ‘Roof’, Justin, owns a motorbike shop in Mesaru called Cycle Centre. Before continuing our journey through Lesotho we needed to source a new front tyre for Mick and service both the bikes which were at 5000kms. After much too-ing and fro-ing Mick decided on a Mitas E07, which although we’d been satisfied with the E07s on the rear, was a disappointment on the front. With of bike maintenance complete we hit the road in search of more epic views. The south of Lesotho naturally obliged….. 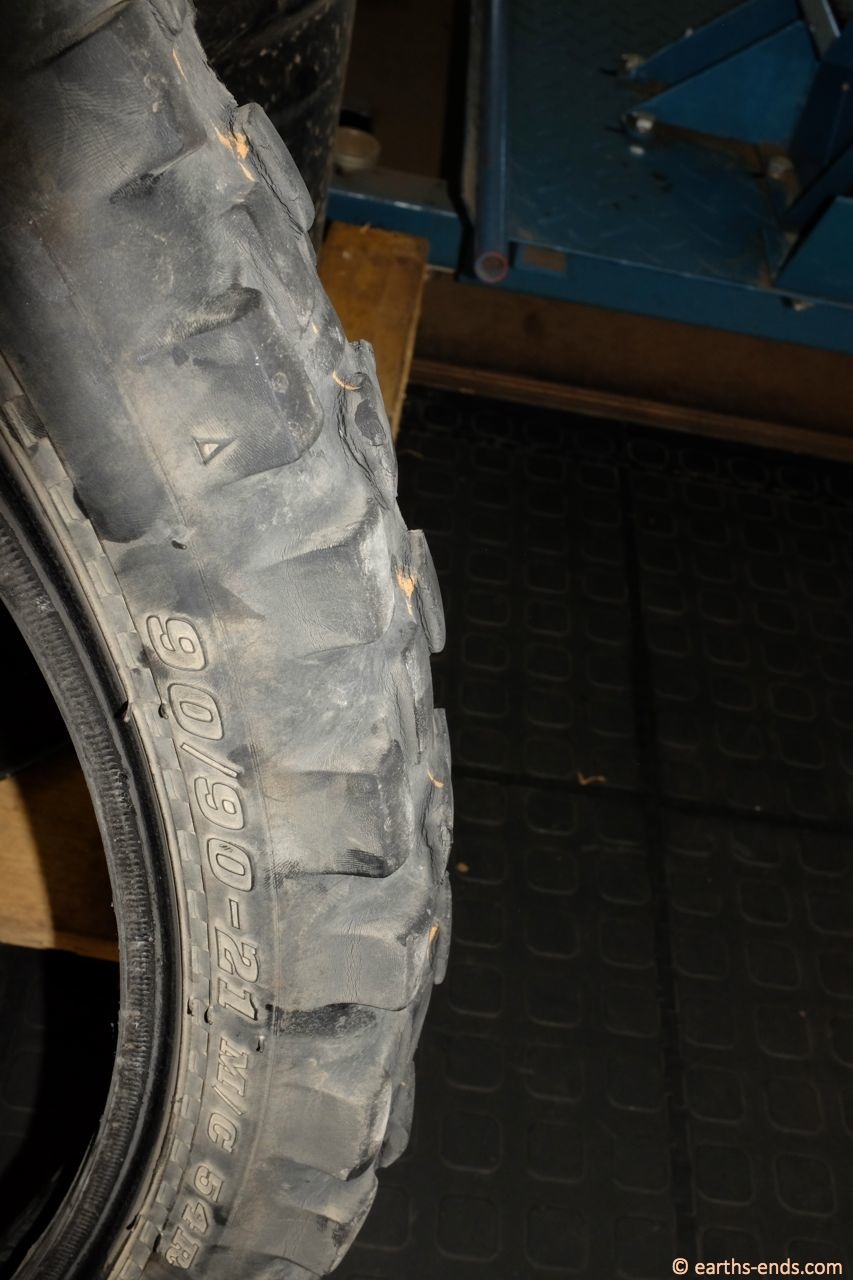 Mick’s flogged out front tyre a Dunlop 606 all the way from Australia. Funny how my tyre had the same amount of kms but nowhere near the wear – curious-er and curious-er 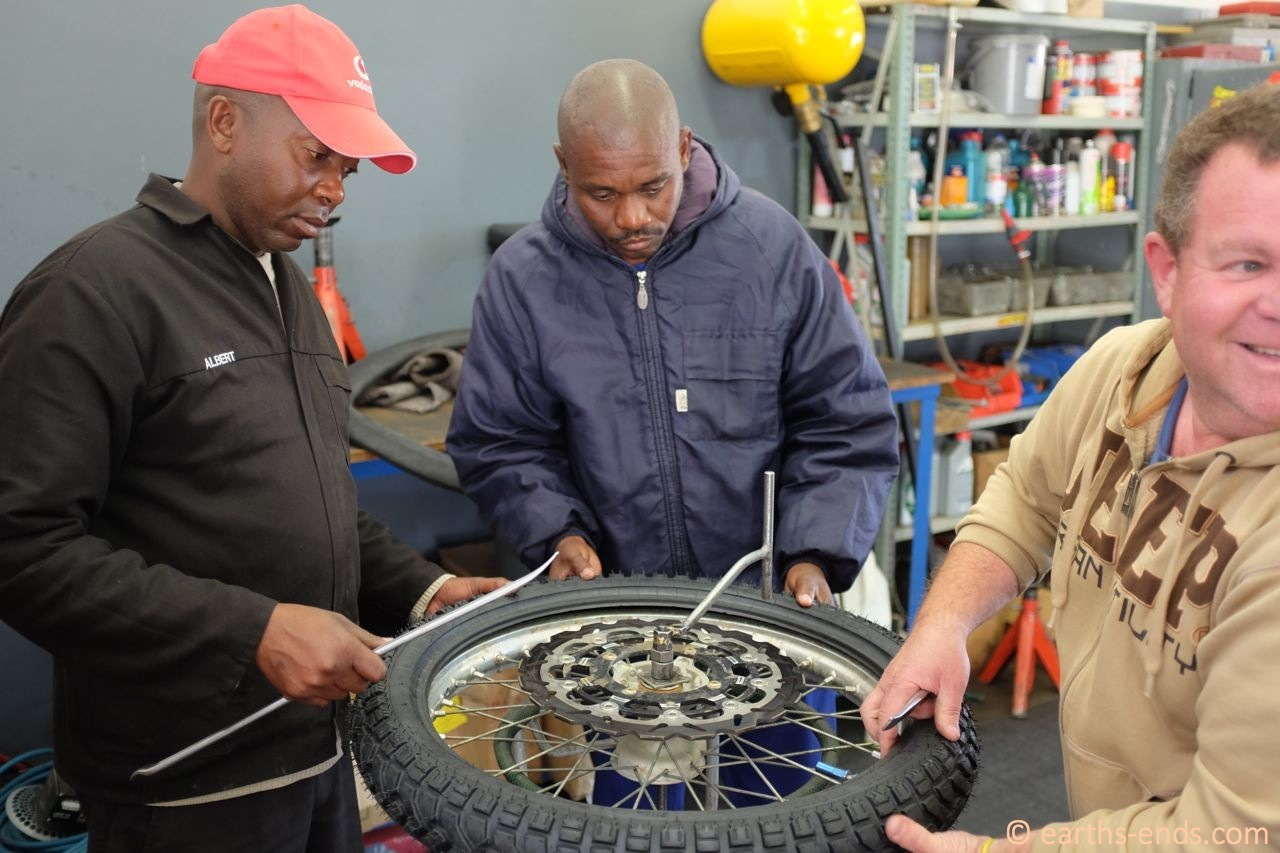 Justin and his garage

← Return to the Mountain Kingdom
A Cozy Blankie with your Coup d’Etat? →
Tweet