Blog 17 by Mick: Mokorros in the Delta

While our jaunt into the bush was only 2 days there and back and we didn’t even get to where we wanted to go anyway, the energy expended in the heat and the dehydration meant everyone was pretty slow the next morning. We all ate a big cooked breakfast with lots of coffee, ironically not a great choice for dehydration but definitely very good for everything else, especially feeling pretty slow.

We said our goodbyes to the Beemer brigade who were all heading north to Kasane, and then crossing into Zambia for a look at Victoria Falls. Mark, Tan and I said our goodbyes and watched the loaded up bikes roar off through the sand, then we slinked back to the bar and ate toasties, drank coke and talked shit until we all felt a bit more energised. 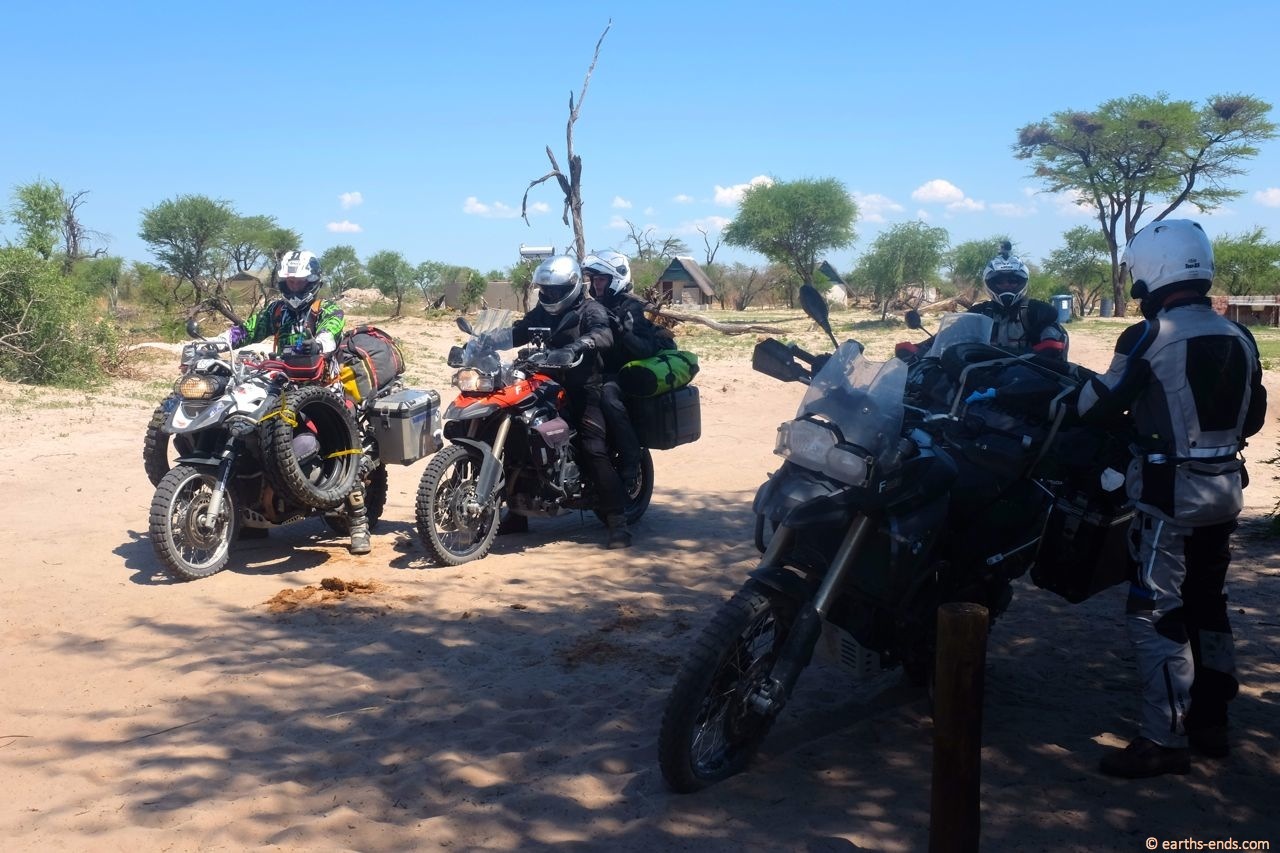 Saying goodbye to our BMW biker buddies. Peter and Gabriel were carrying “commercial quantities” of tyres – I think if they were to break down somewhere their plan was to open a tyre shop to finance the repairs…

Mark had packed his KLR for about the 4th time with the idea of going to Zimbabwe and ultimately Mozambique, but was again second guessing his plans. The managers at Elephant Sands had him on a pretty good wicket and it was a great spot to be with lots of interesting work to be done. So once again he ended up unpacking his bike back into his bungalow and instead went to drive a water tanker. There is a bore about 30kms away that is a permanent source of drinking water for the elephants when the water hole at the camp is dry and the elephants start getting desperate and destructive. Mercedes Benz had donated a refurbished Scania B-double for this purpose a couple years ago and for most of the year it just sits unused. That is until the end of the dry season comes and it is desperately needed to water the animals. Before this it wasn’t uncommon in similar circumstances for elephants to die in the empty waterhole of dehydration. I tips me hat to Mercedes Benz and the good people at Elephant Sands – fantastic work.

This left us to get on our way. Our destination was only about 150 kilometres away so we left at about 4:30 in the afternoon to avoid the worst of the heat. And also because we were lazy. We settled in at the restaurant craving protein and salt after all our exertion and feasted on bloody steak and salty chips. 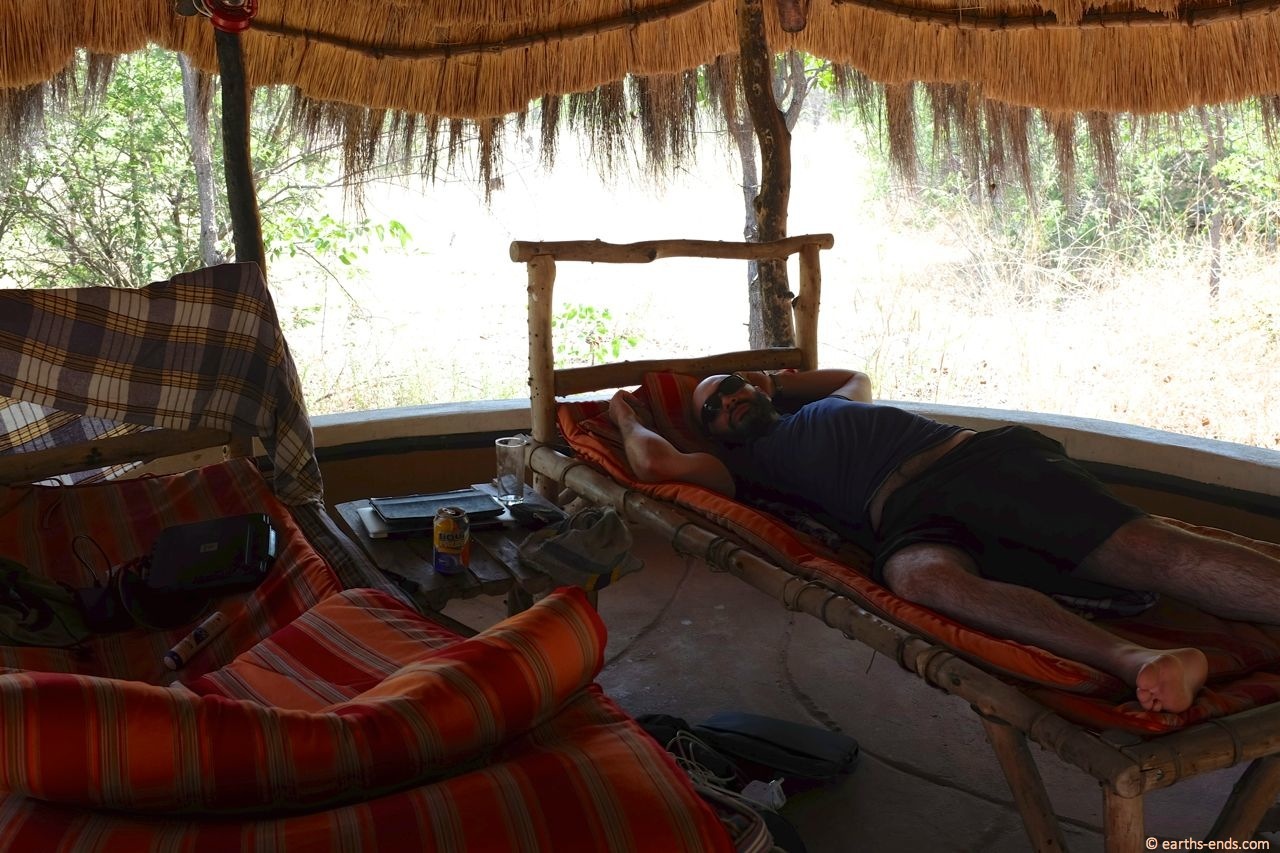 An awful lot of snoozing went down

The next couple days were stinking hot as the wet season built up but still it refused to rain. In northern Australia during the build up, or Mango Season, it is kind of hard to not go a bit berko in the high 30’s or low 40’s heat combined with wicked humidity. Turns out its much the same in Bots. We spent many hours cooling off in the pool, reading by the pool, reading in the pool, working on the blog (both in and by the pool), and binged a couple seasons of Breaking Bad (again with significant involvement of said pool). Before leaving Australia we had stockpiled a variety of movies and TV shows as we had envisaged all this free time where we could entertain ourselves but it had never really eventuated, until now. We watched a fair few episodes a day and did a steller job of powering through the first 2 seasons. 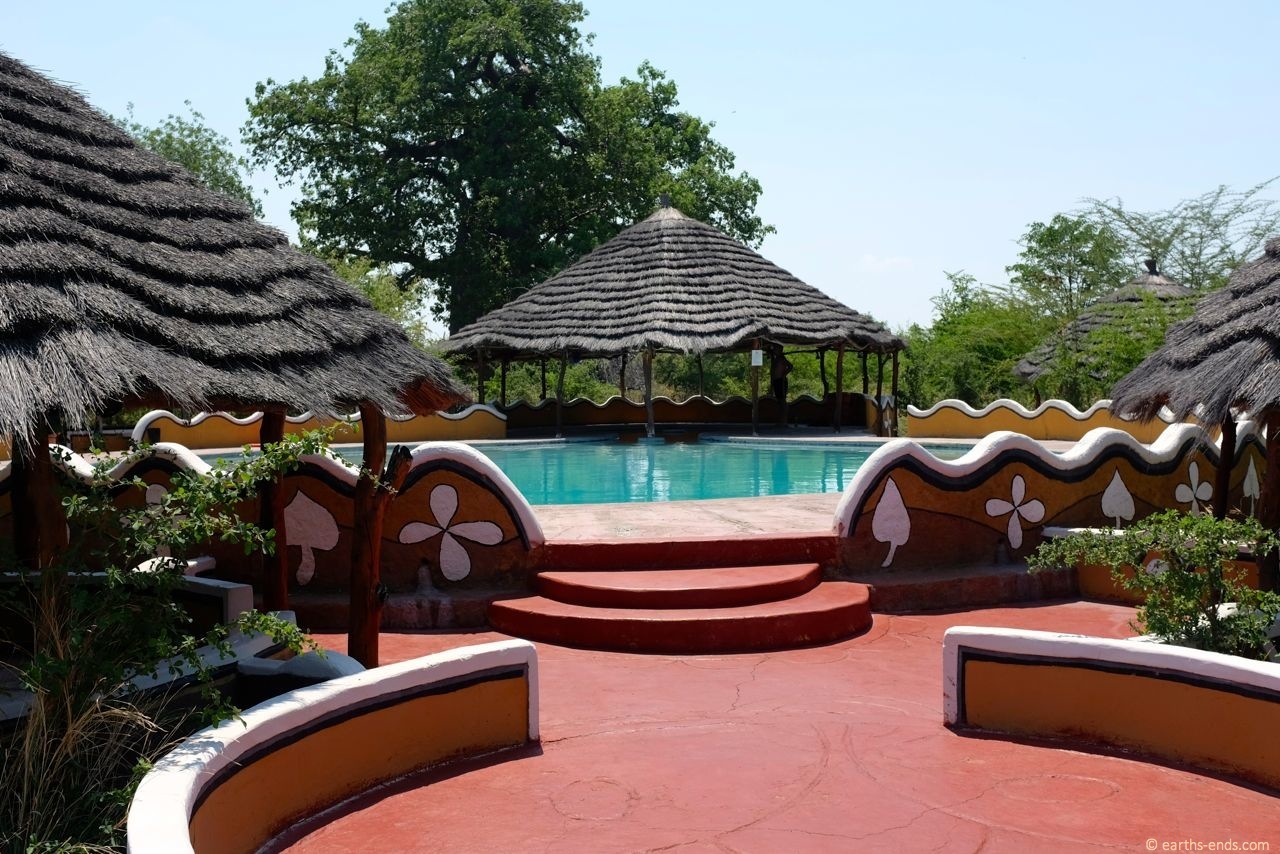 We slept in the tent, but our real home during our Planet Baobab stay was here.

After a few days of doing nothing more than swimming, eating and sleeping, we decided we better actually do something so packed up our tent and made our way down the highway to Muan. We had been recommended staying at the Old Bridge Backpackers which had a pretty cool vibe through the day and a mixed bunch of clients – overlanders, backpackers, expats and locals. At the night though it got a little seedy it must be said with some locals being of the employ by the hour variety. 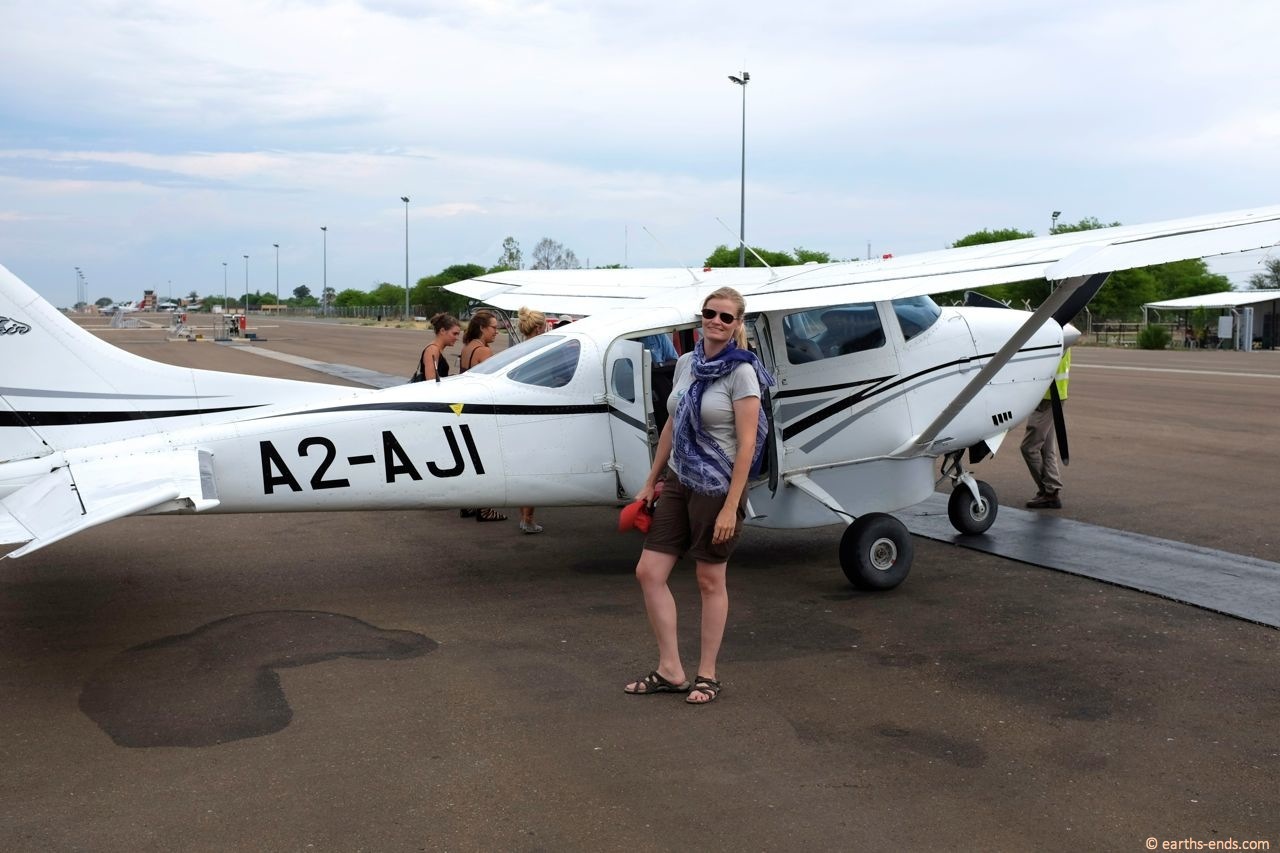 Our plane for the Delta flight

We were approached by a group of young backpackers who asked if we wanted to split the cost of a scenic flight over the delta, which after a quick discussion we thought that was a great idea. We ended up changing flight companies in the airport at the last minute though because they had assured us there was a 6th person to split the bill with. However on arrival that person suddenly disappeared and that pushed the price up. We had spoken to them on the phone to confirm the flight at before leaving for the airport and within 40 minutes the phantom 6th person had vanished. Yeah right….. classic tourist scam – seeya later. Anyway, the company we went with was great and we saw plenty of game once we got used to looking down from above. It was a great way to get a sense of the Okavango Delta – a really unique environment. 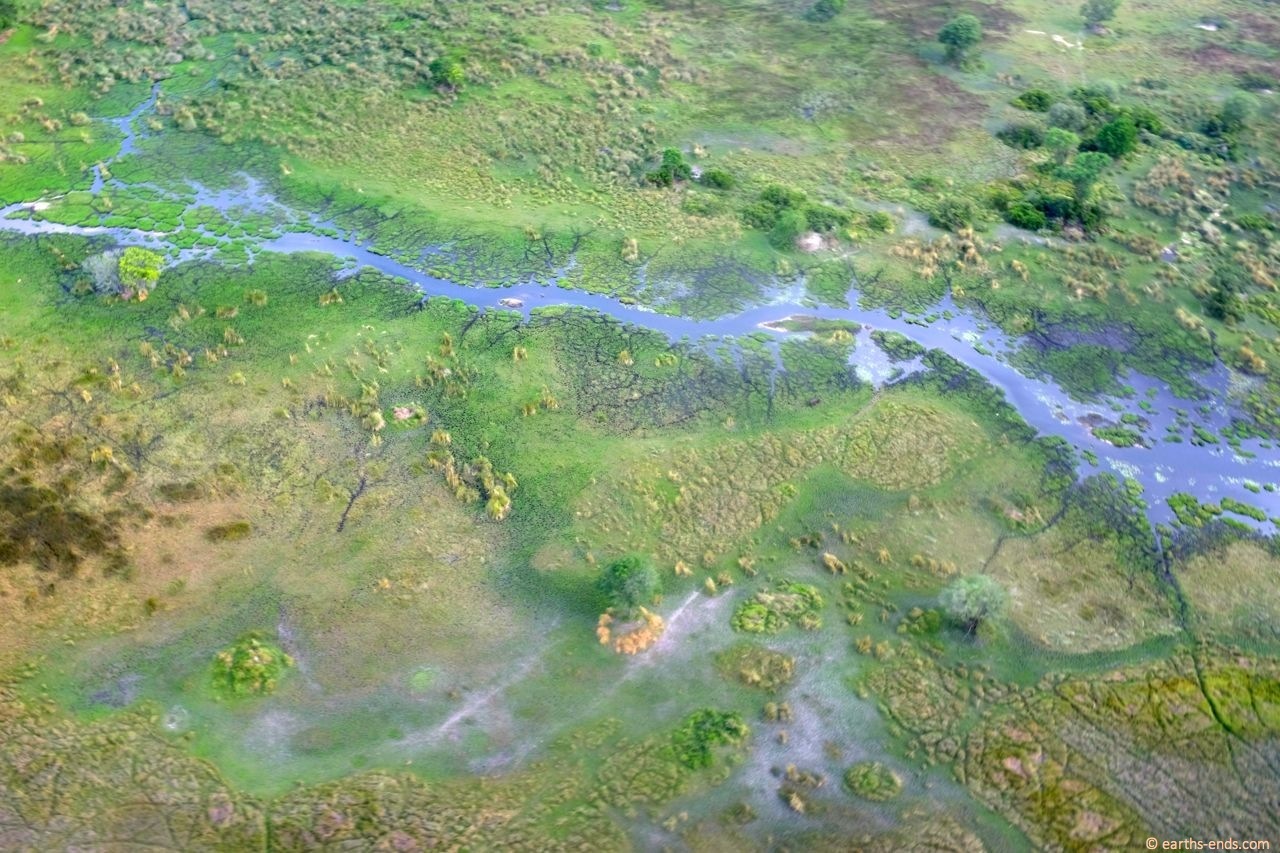 We saw heaps of giraffe, elephant, buffalo and hippos from above 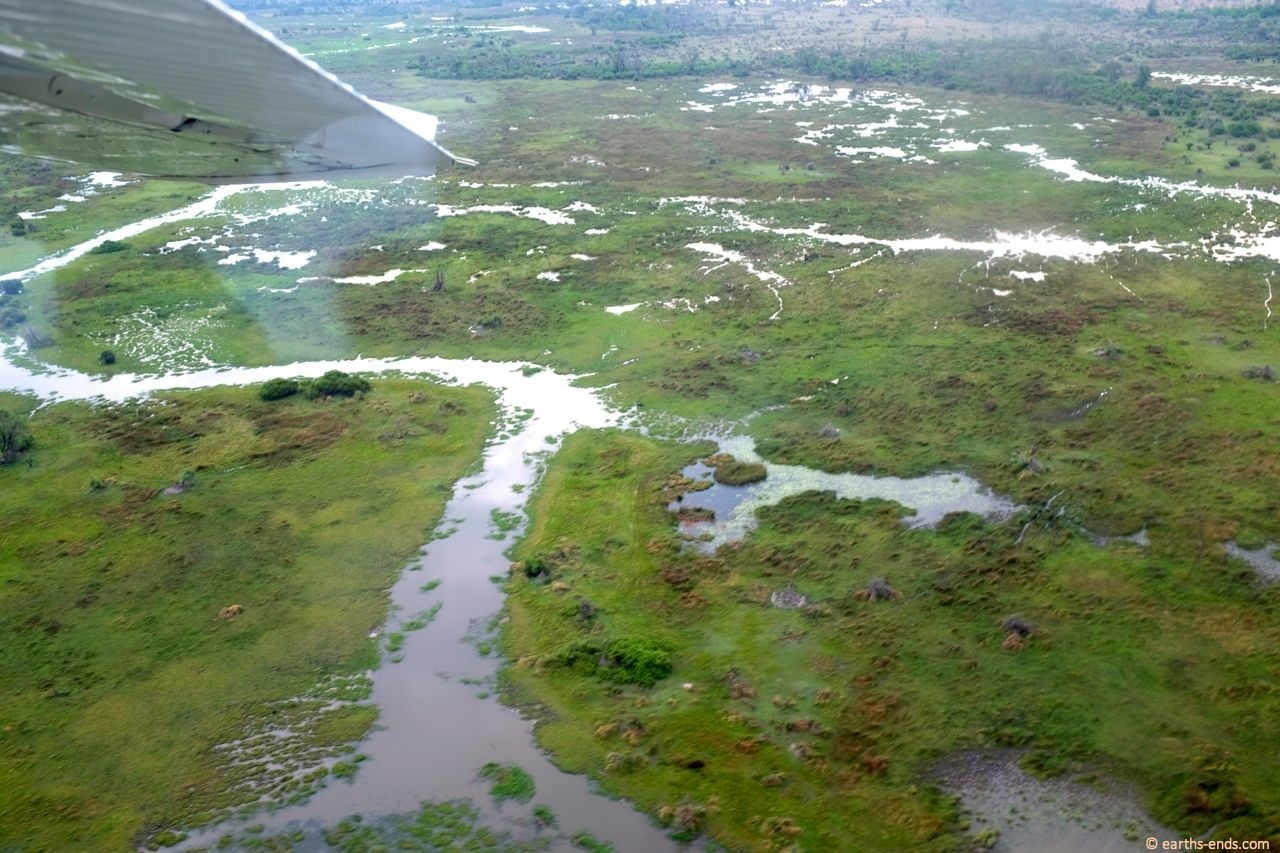 Far from being a swampy mess of a place – its more a collection of channels and pools of water at the end of the dry season and the water is crystal clear. Buffalo and Elephant in this pic 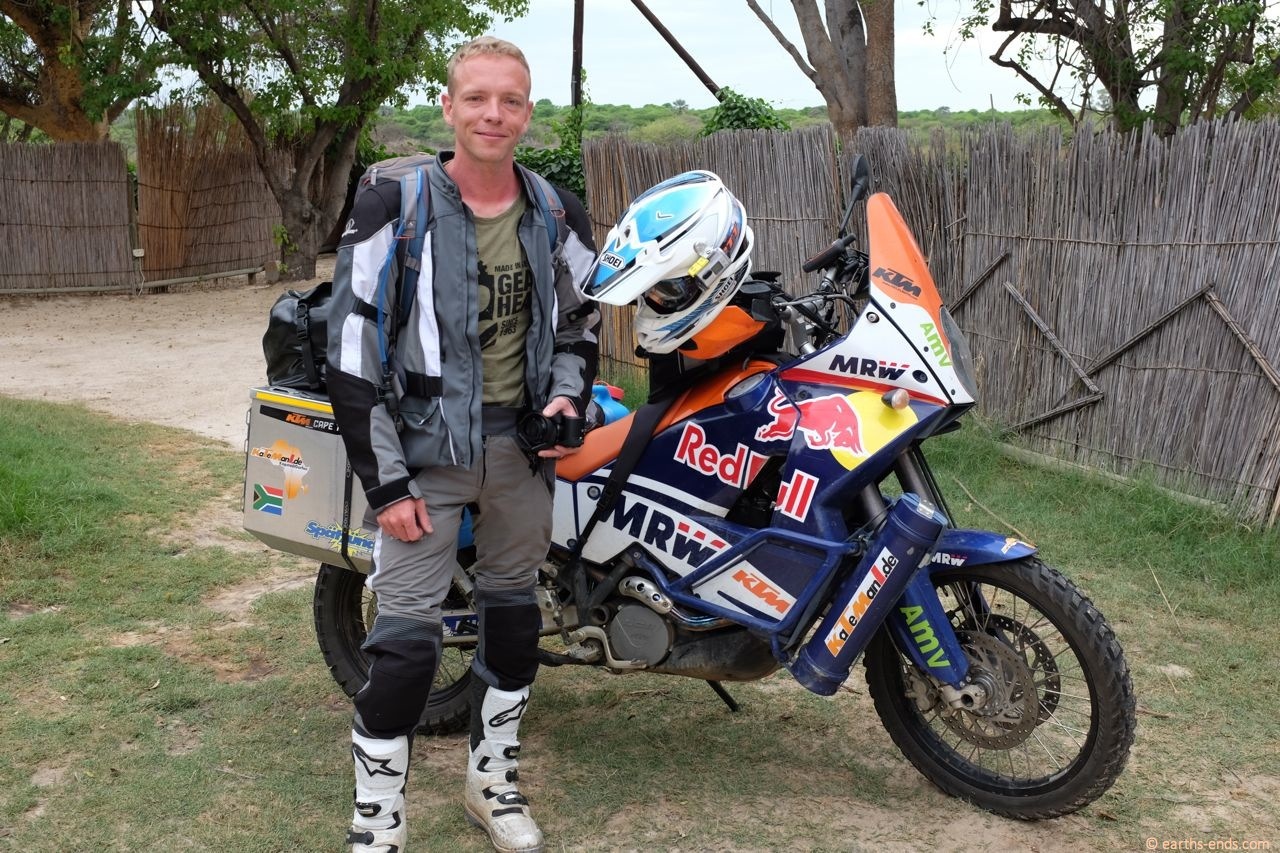 The following day we got up early and packed up our stuff and stashed the bikes in a corner of the campsite. We had organised to do a Mokorro (a local dug-out canoe that is poled not paddled) trip into the delta. After a quick blast in a power boat, we met Sam our mokorro guide and after poling for about 3 hours into the delta we made camp. In the evening we went for a walk to look for game but found nothing except bored looking tourists from another mokorro tour. Sam tried to spice things up by spruiking the virtues of a termite mound and a baobab tree, but if I’m honest they weren’t overly exciting. We also stumbled across a baby leopard tortoise shell which had been cracked open by a hornbill. We had seen these birds all over Botswana and they are quite impressive to look at with their big powerful beak, however we hadn’t seen what that big powerful beak was actually capable of until now. 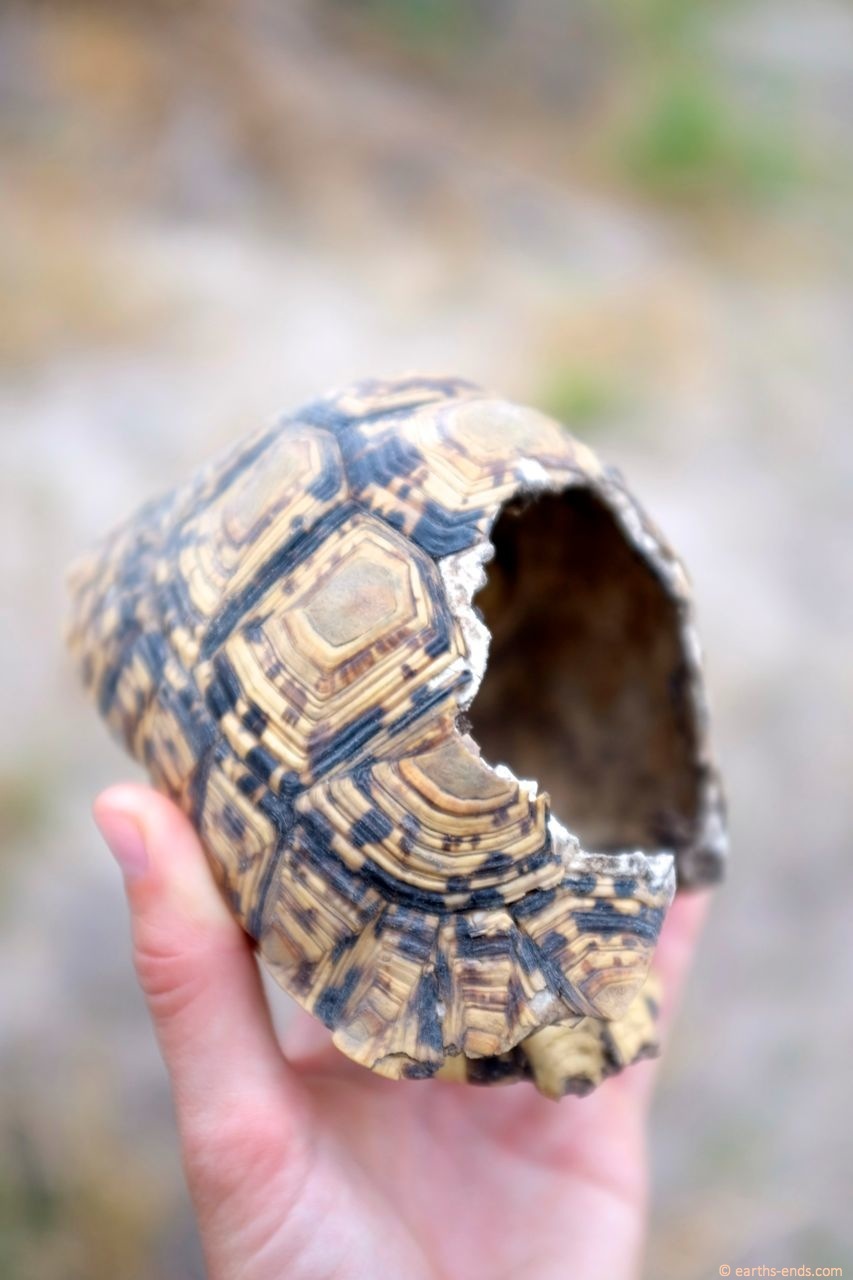 Our game walk the following morning was a little more eventful. We left a little after 6 and it wasn’t long until we found a “tower” of giraffes, the collective term for a group giraffe standing still. Interestingly, the collective term for giraffe walking is a “journey”, whereas for giraffe eating is a “stretch”. That is another trivia night winning nugget of info right there, you can thank me when you get your hands on that meat tray. 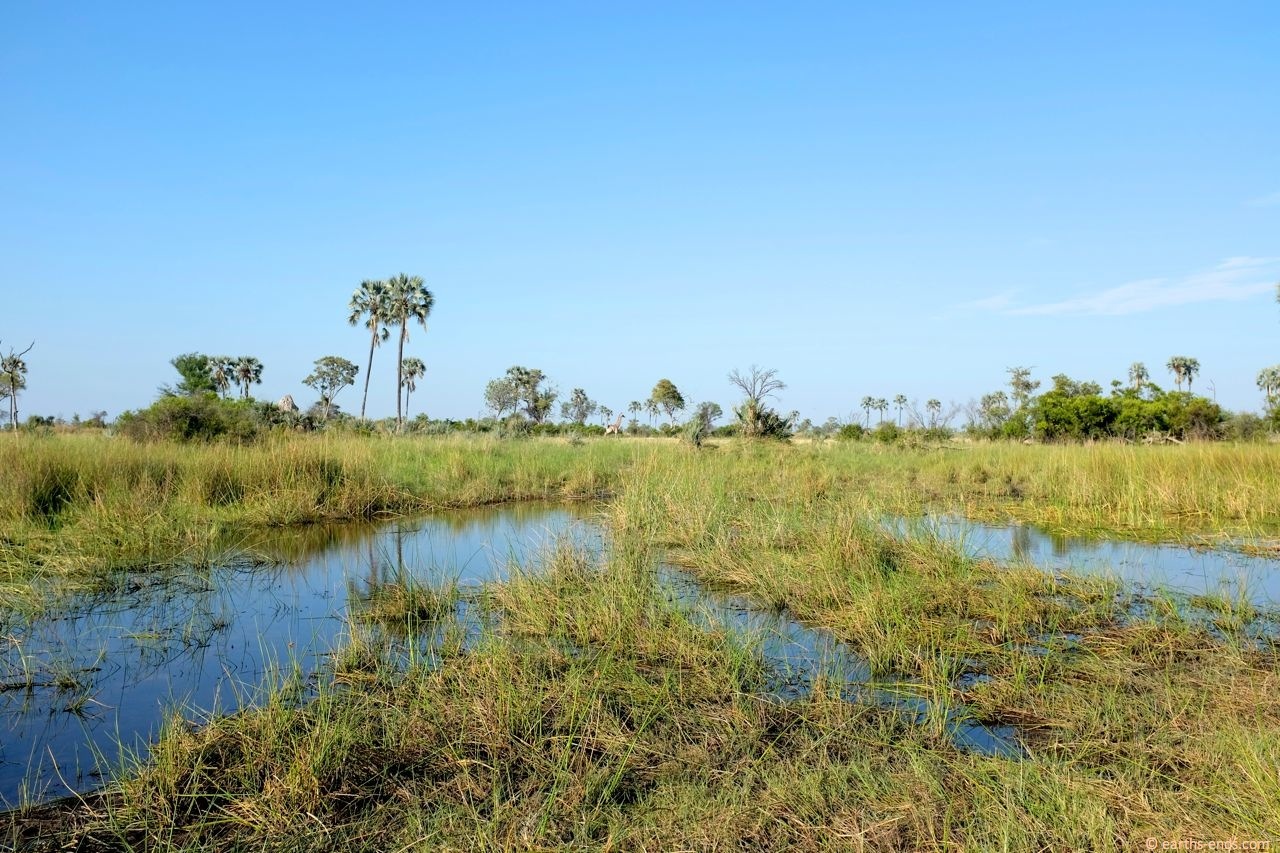 A lone giraffe way in the distance. He stopped to look at us then remembered he was far behind his herd and ran off again. 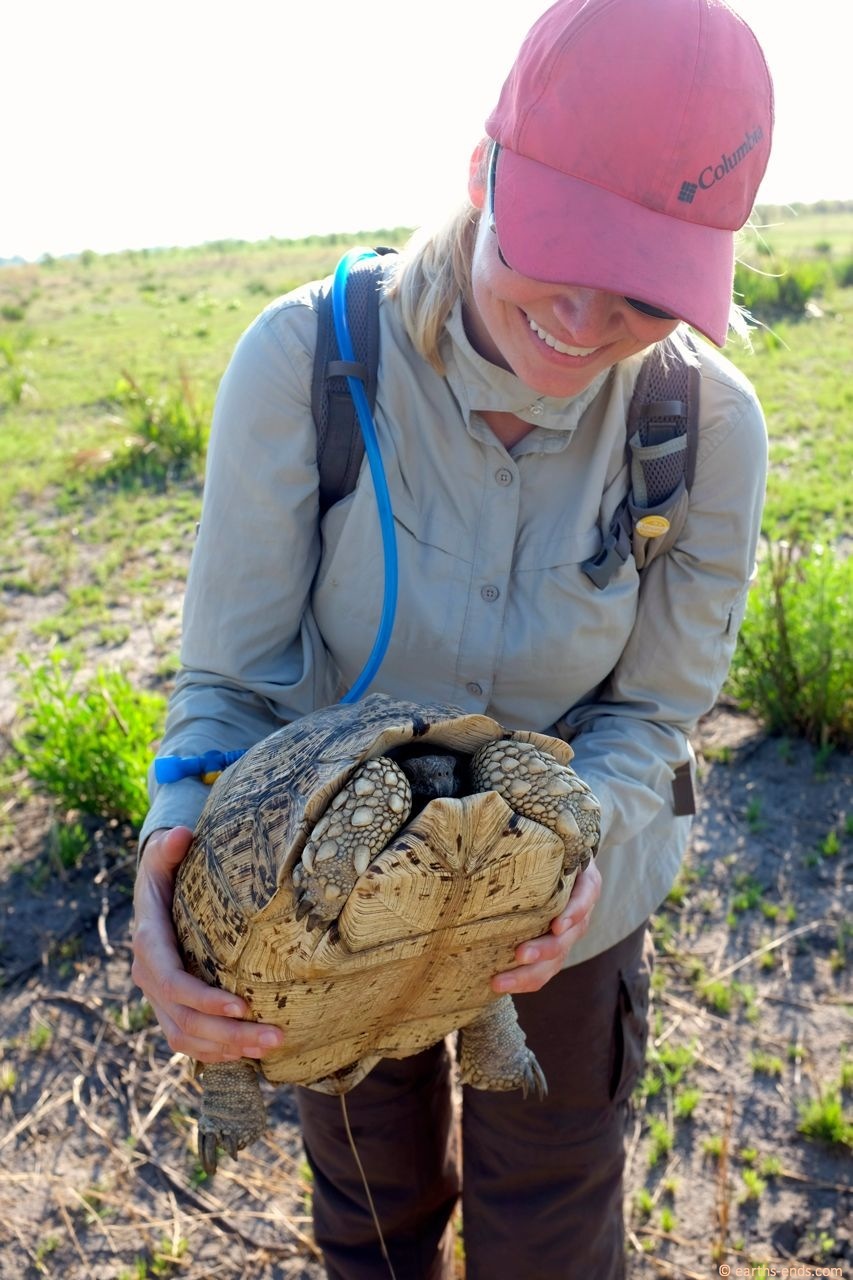 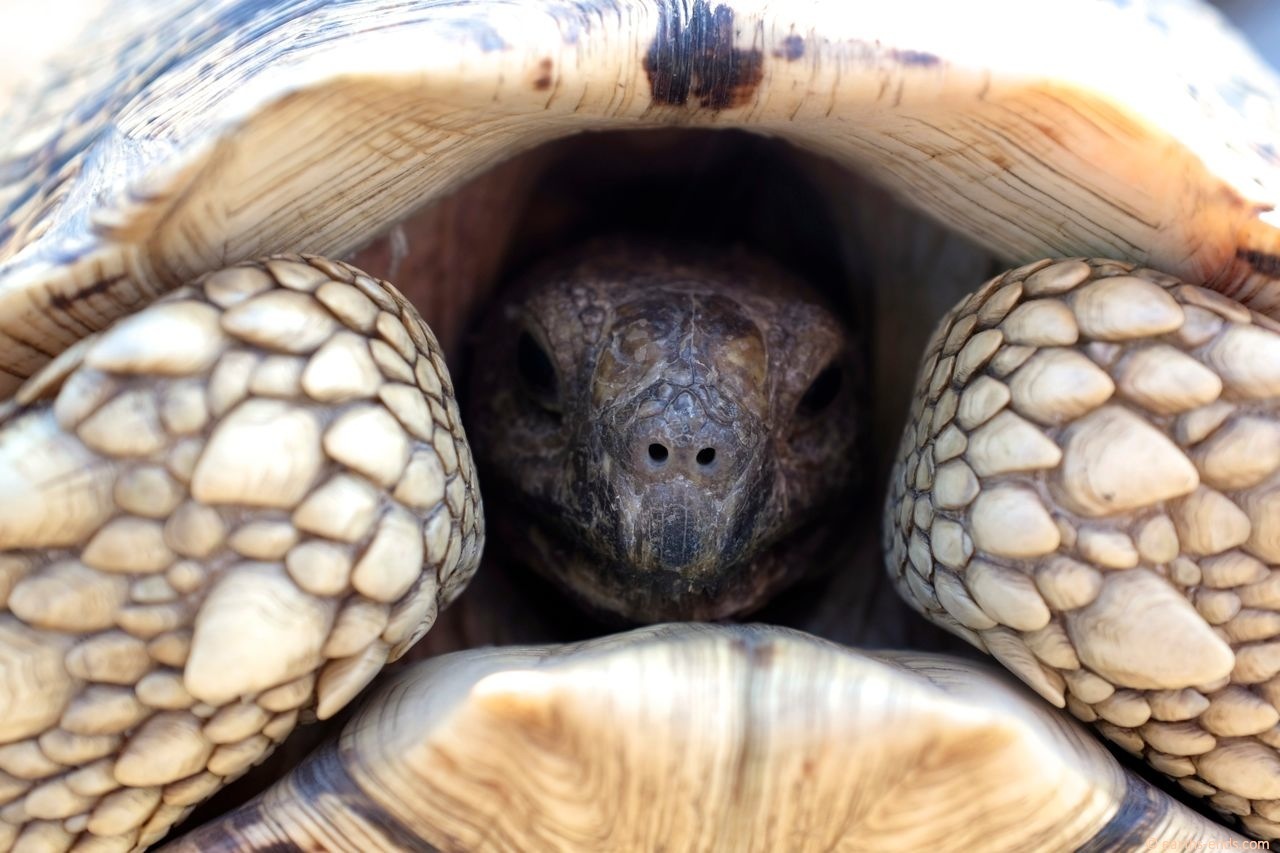 Ready for a close up

Anyway, back to the tower. At 20 animals, it was easily the biggest group of giraffe we had seen yet (either standing, walking or eating). About 20 minutes after the journey had walked off (you see what I did there?) we saw the dunce of the herd galloping in a panic trying to catch up. He must have fallen asleep under a tree or gotten distracted by a butterfly or something while the stretch had breakfast (still with me?) and had fallen far far behind. The rest of the game walk was filled with the usual sort of animals, a leopard tortoise, zebra, wildebeest and some other antelope. Oh, and termite mounds and baobab trees too. Can’t forget those.

Views near our campsite 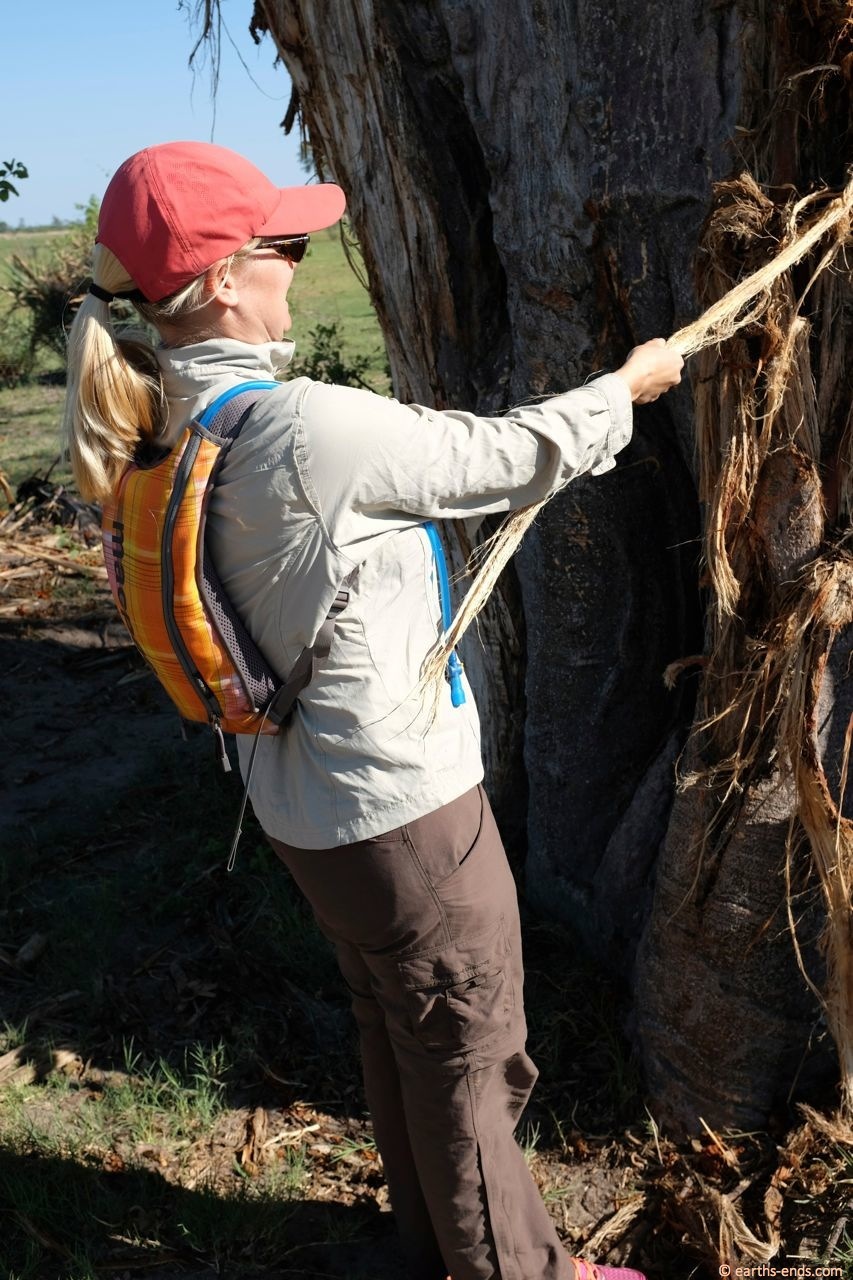 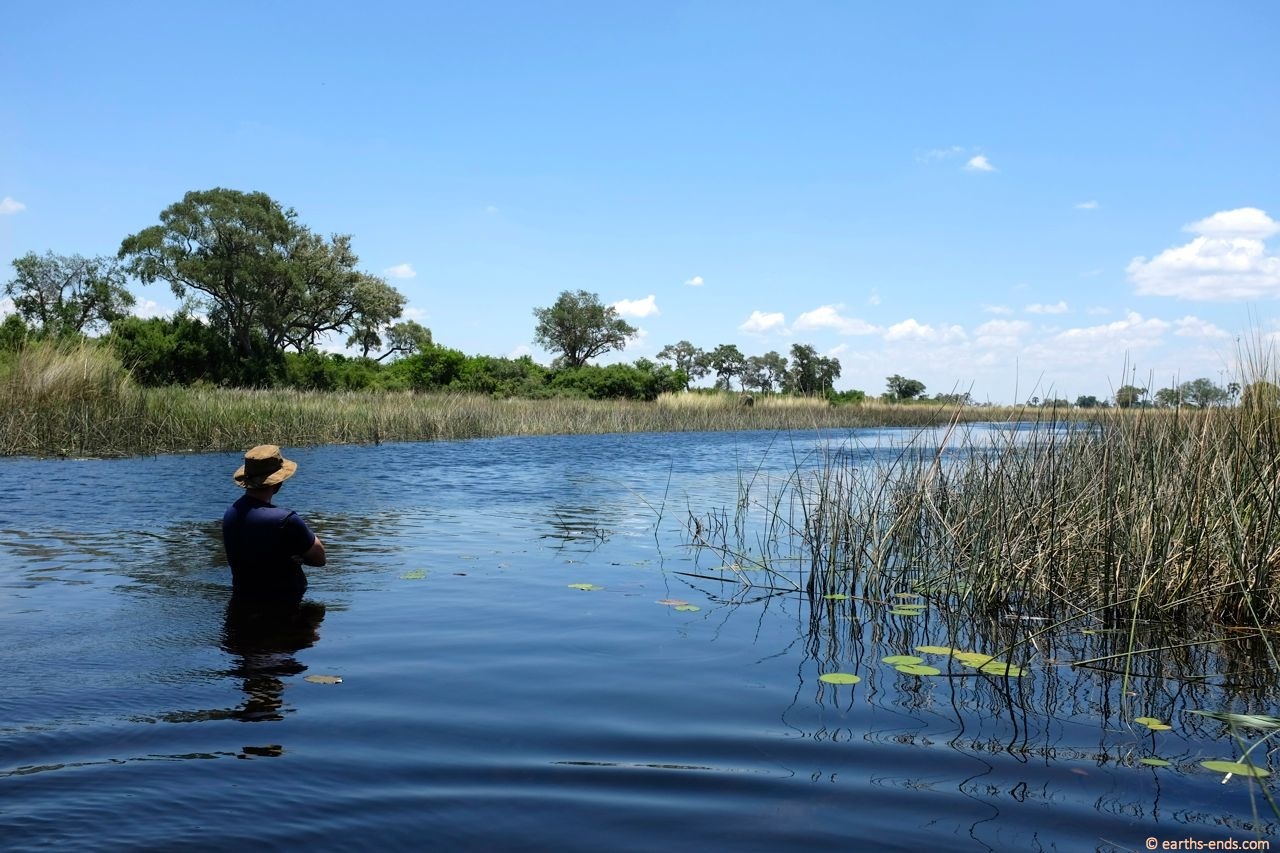 The afternoon though was something mighty special, probably the highlight of our time in Botswana. While out on the mokorro to enjoy the sunset, we could hear an elephant in the scrub nearby ripping off branches and shaking down fruit from palm trees. To our astonishment he appeared from the bush and walked down to the channel and started eating lotus flowers, ripping them from the mud, thrashing them through the water to clean them and crunching away happily. 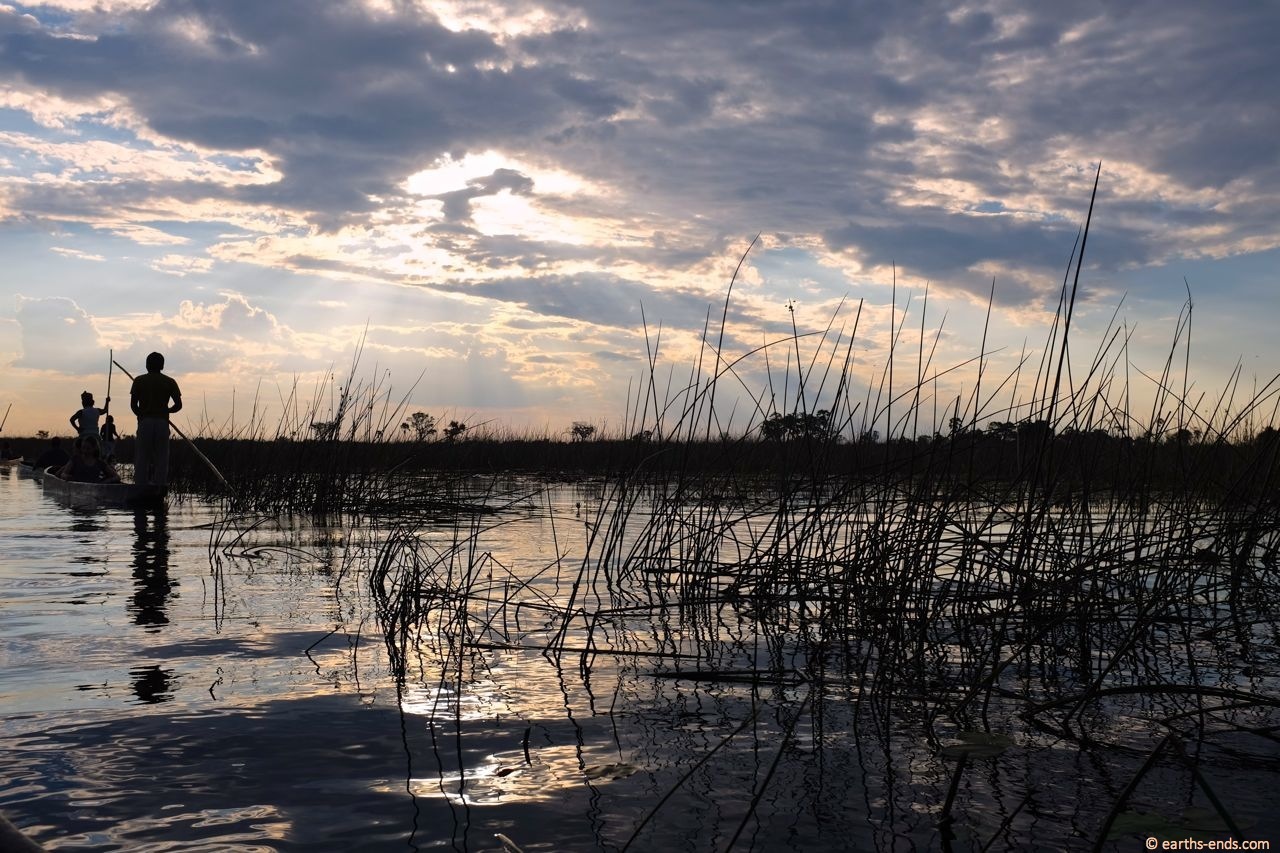 Crystal clear waters of the delta 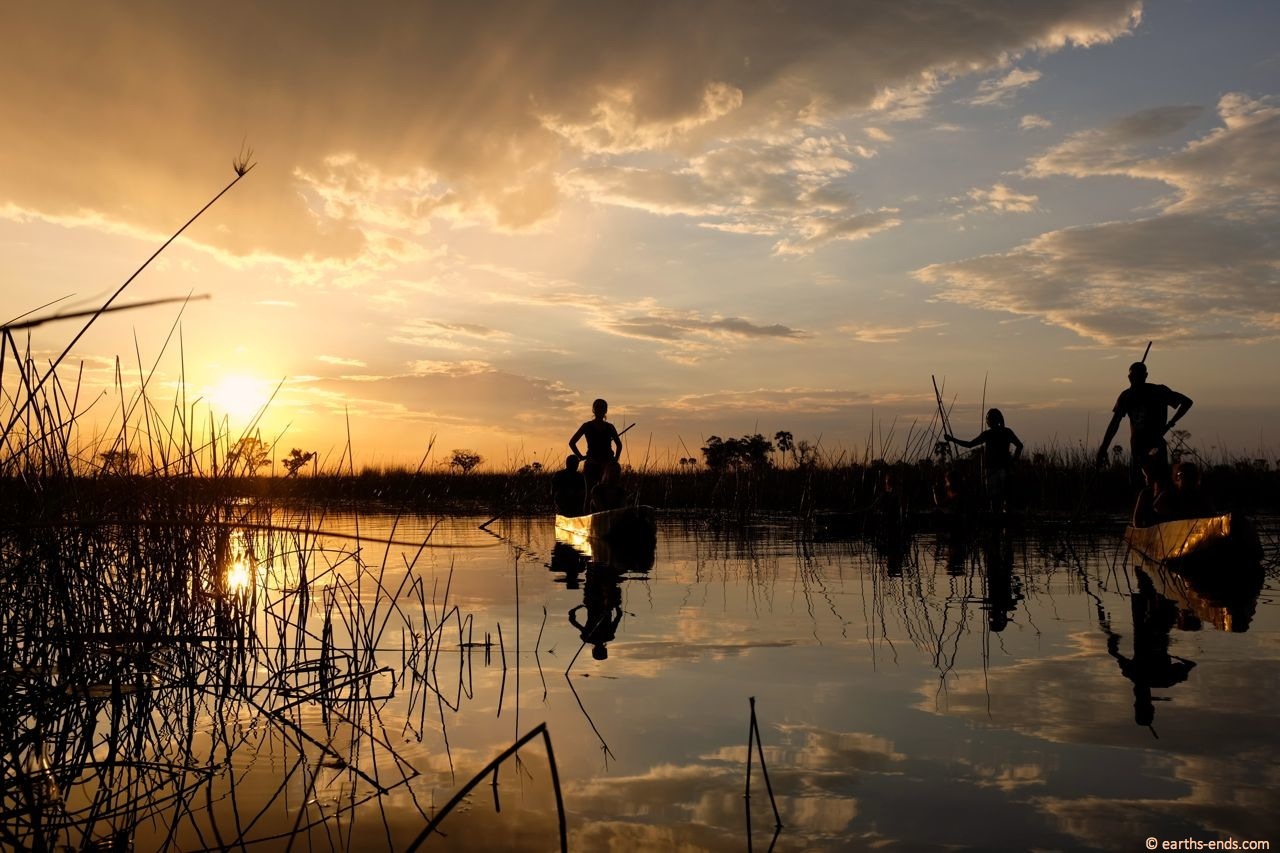 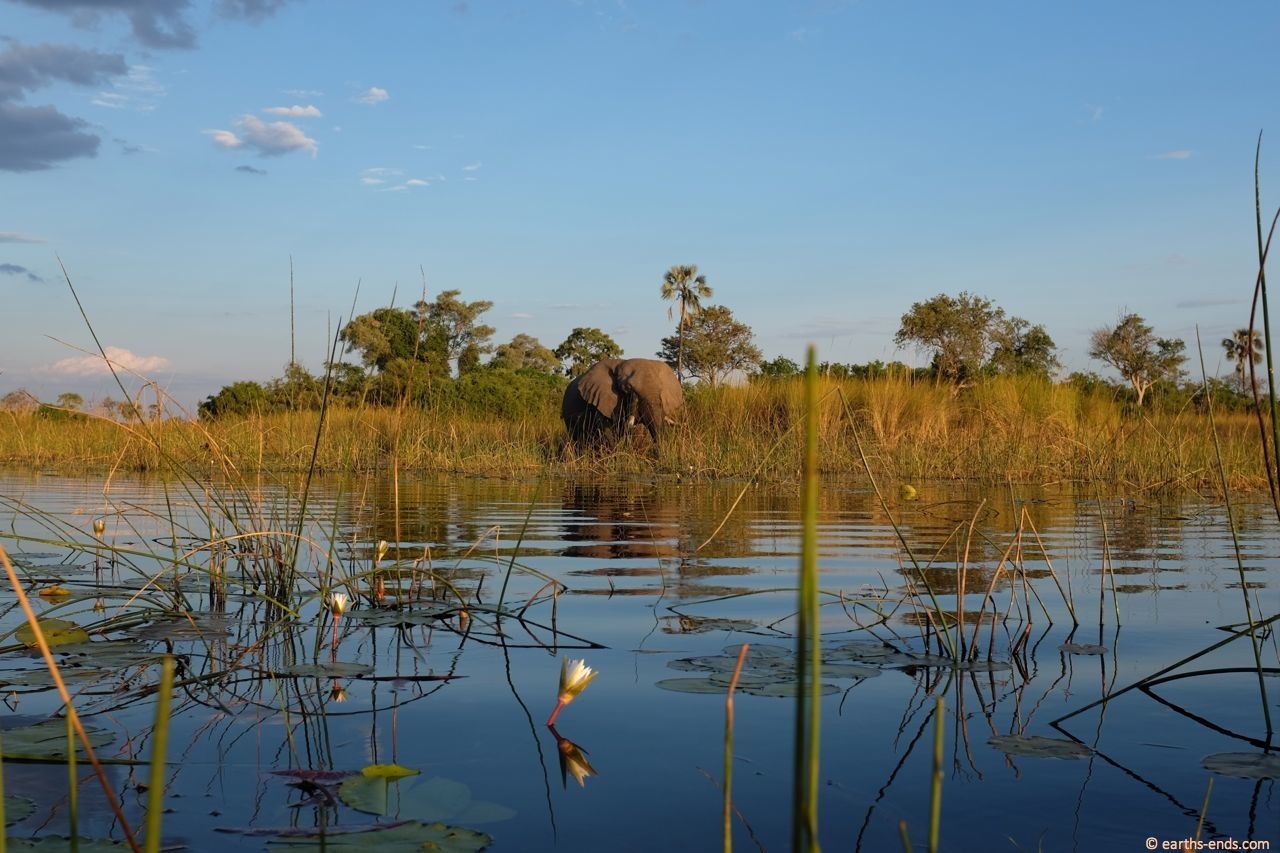 This elephant put on quite the show for us

For the next hour or so we were amazed as this big guy slowly walked up the channel with us sometimes as close as 20 or 25 metres away, or as close as the mokorro guide’s nerves would allow. While there are very intelligent and quite majestic, elephants are incredibly powerful and very dangerous animals after all. The camera and SD card must have been near overheating by the hammering it got. It was such a highlight – truly amazing. 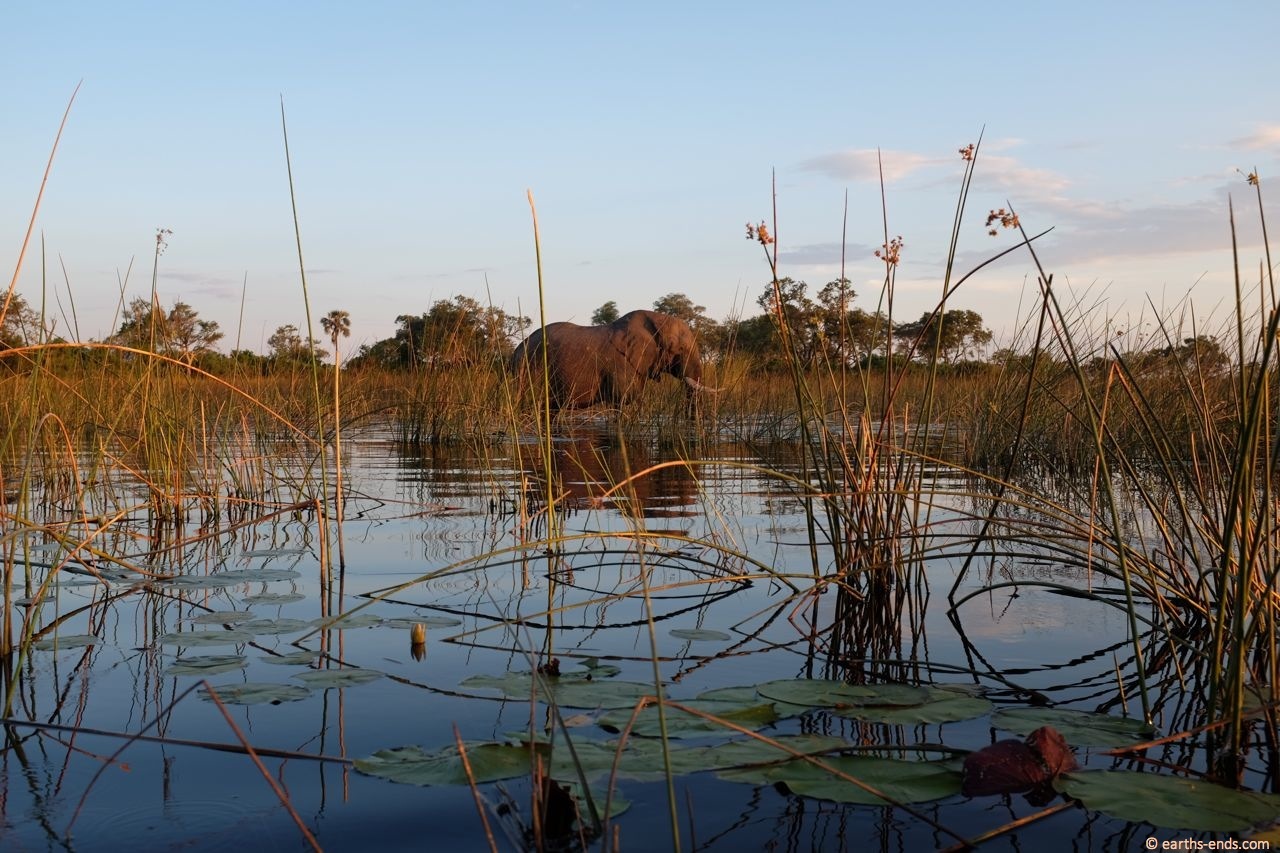 He didn’t seemed bothered by us at all 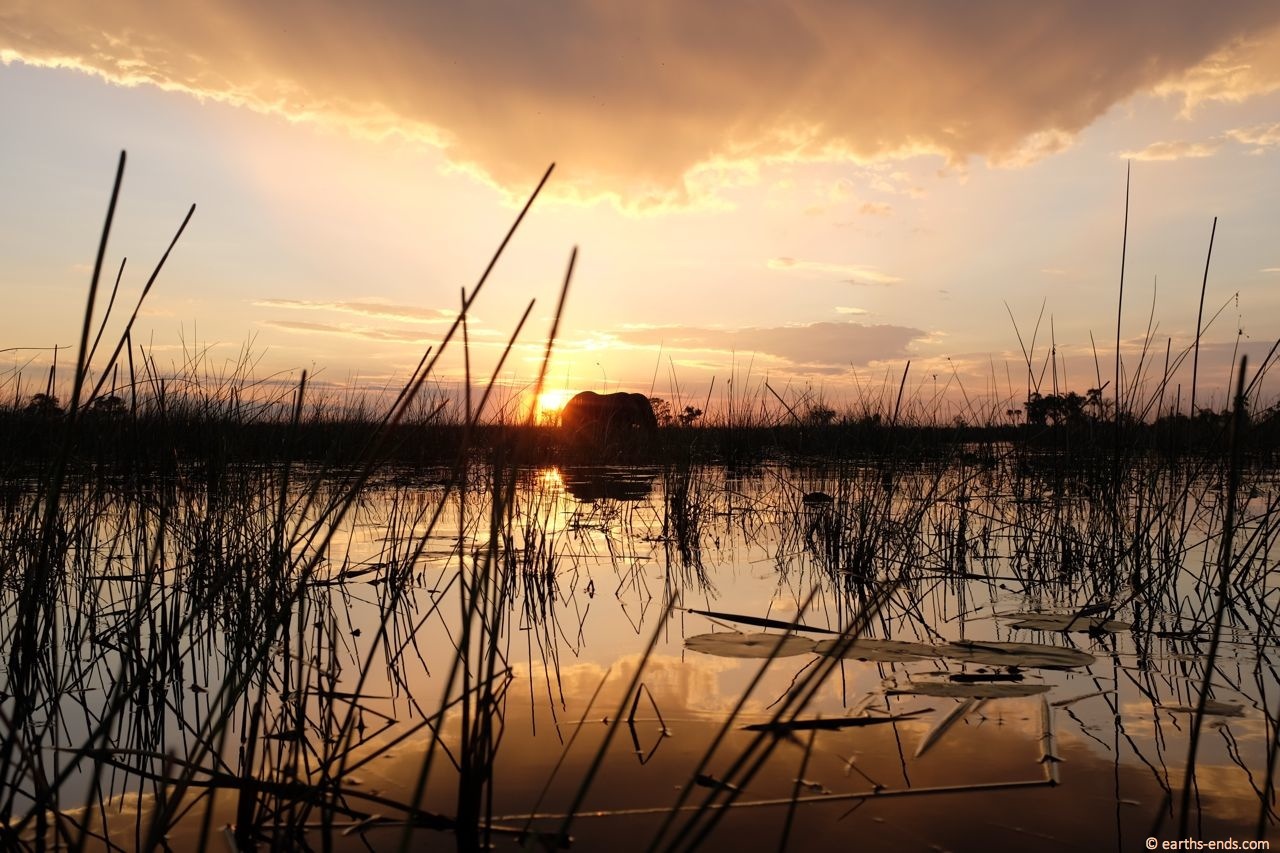 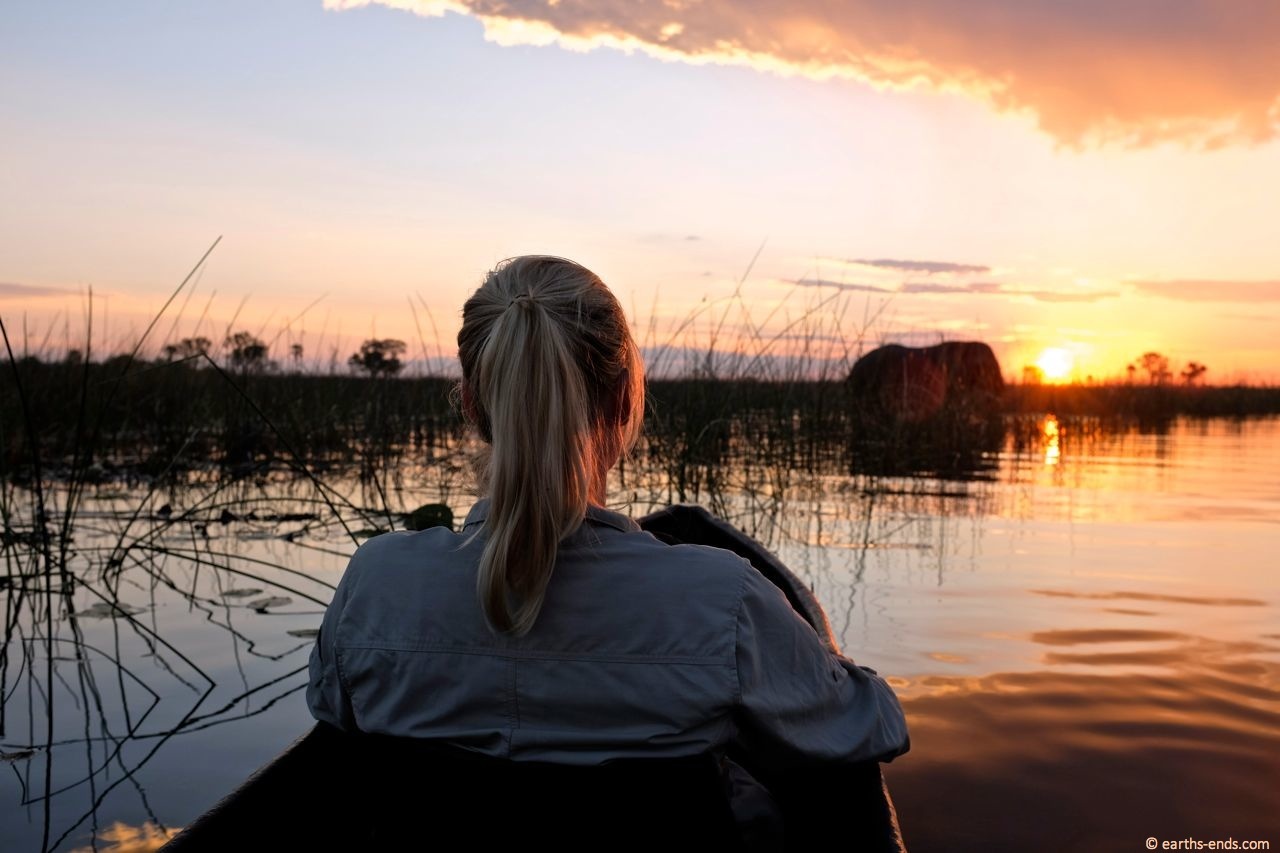 All that was missing was a glass of wine. Maybe a cheese platter 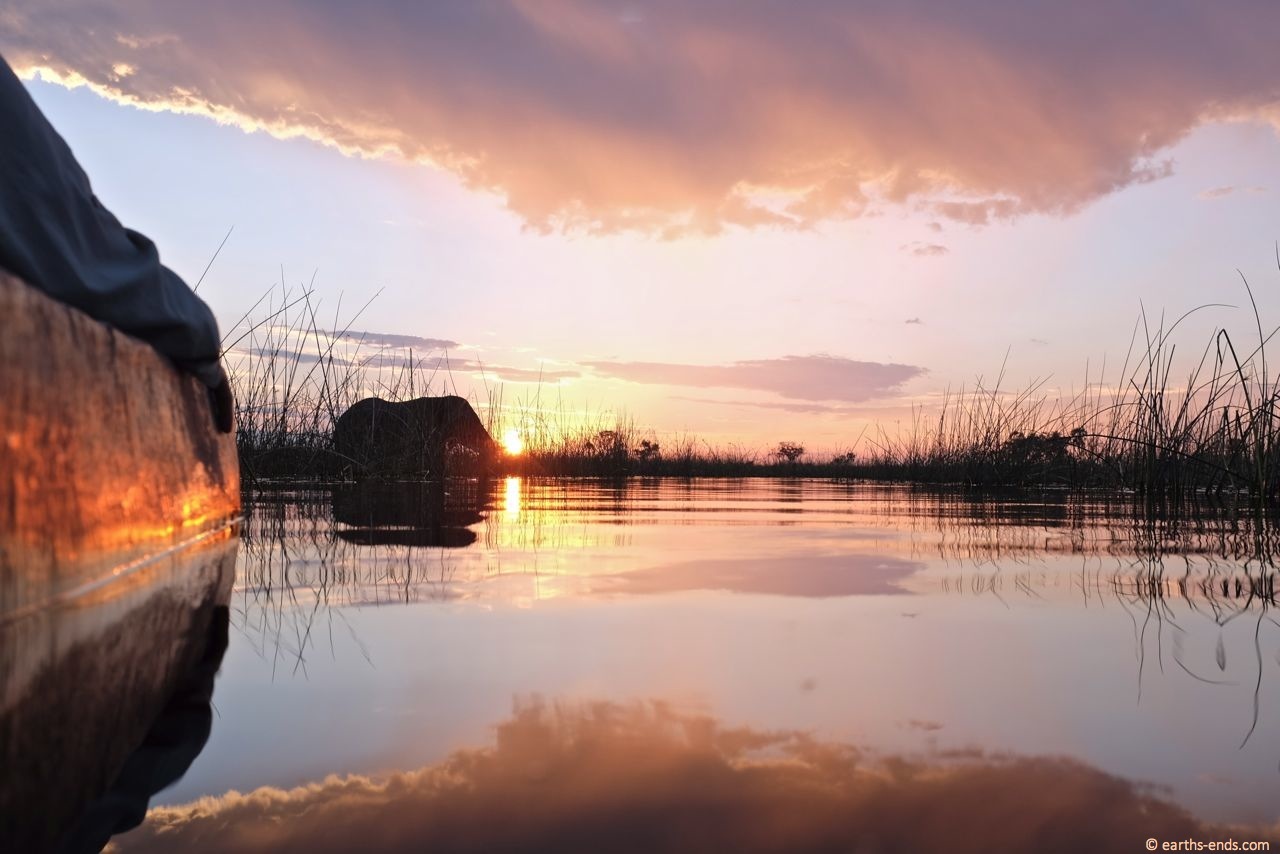 The photo opportunities where near limitless. This is one of my favourites of the trip so far

The final day of the trip included one more game walk, where we saw the usual game (zebra, wildebeest etc) and some bustards, a really ugly critter. On the return we stumbled upon some fresh leopard tracks and then had a look at an elephant skeleton that had been there for about 4 years. Sam gave us some interesting info, apparently when an elephant is old and knows it is about to die, it will go to the delta and have a large drink of water, then find a shady spot and lay down and die. The other members of the herd will stay and mourn for a few days and then leave, and when next in the area will return to the body and scatter the bones so its less recognisable as an elephant corpse. It is really quite human behavior that they seek emotional closure like that. When the body is found, the park rangers will come and remove the tusks and burn them. 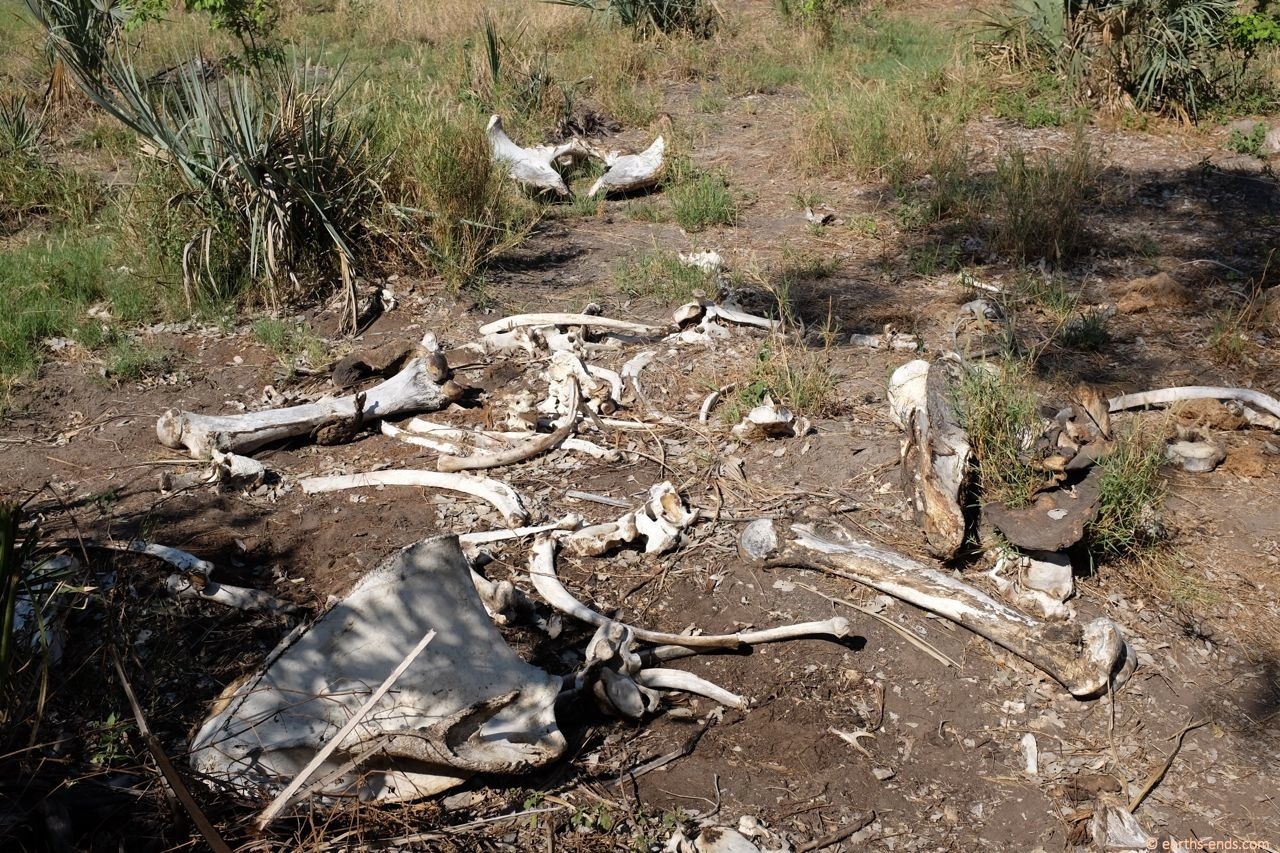 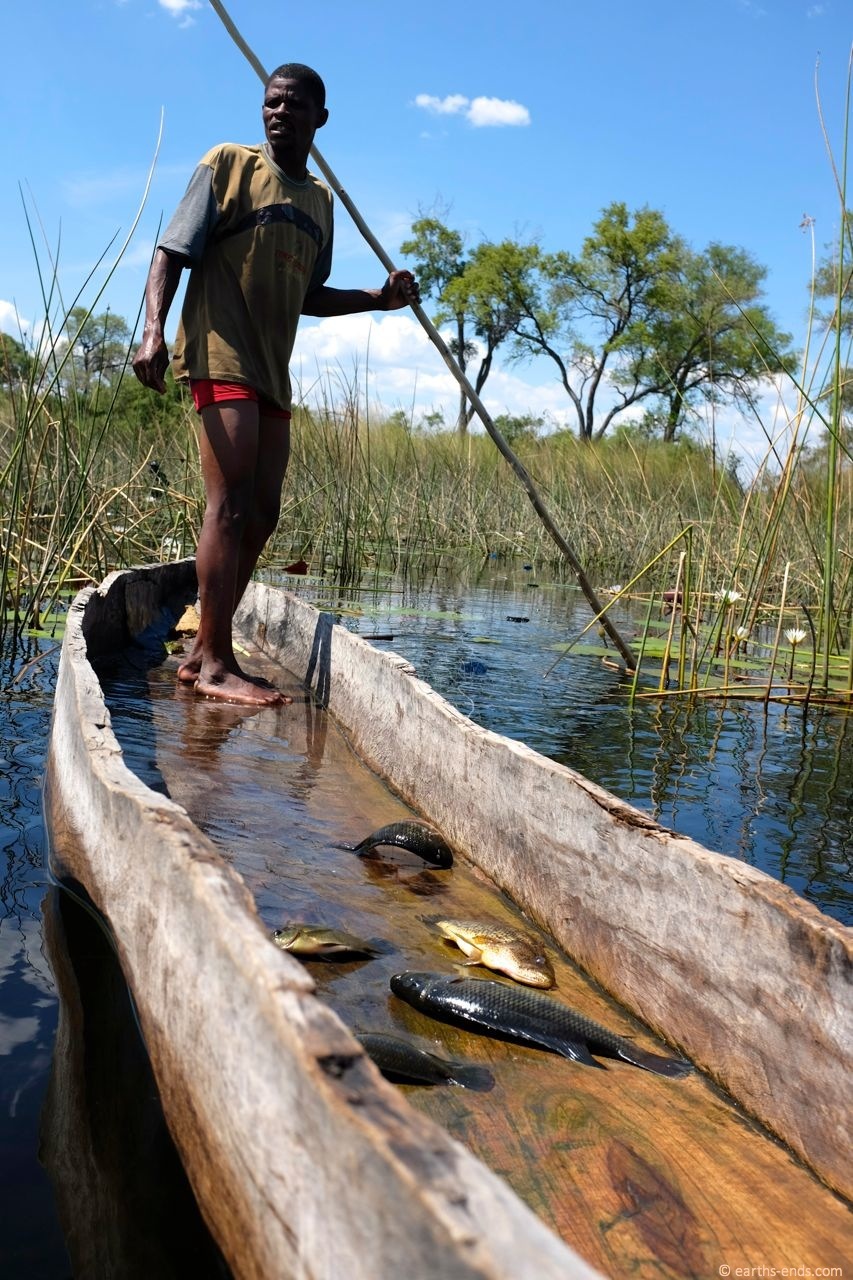 Fisherman with his catch in a traditional dugout mokorro. Many of the ones we rode in were fibreglass or plywood, however this one was the real mccoy

Back in Maun, it was time for washing after our couple days of camping and walking in the heat. I use my clothes bag as a pillow which is fine when most of your clothes are clean. When most are so disgusting your worried that a pack of hyenas might be following you looking for the corpse, you have a problem. We were at that stage.

With that done, it was time to go. We hit the road in the afternoon for Ghanzi which at 290kms, and we were advised by some tourists at the backpackers the trip would take us up to 5hours because of the pot holes and donkeys. But they weren’t powered by the mighty DR tractor; we went straight through and did the trip in a bit over 3 hours, which was fortuitous as we avoided the evening storm. It was then a simple ride the next day to Windhoek, the gateway to the deserts of Namibia.

4 Comments on “Mokorros in the Delta”