2200kms and a Gearbox Rebuild

With Tan at the dentist, I had some time to kill so figured I better track down my (apparently, judging by the price) gold plated 3rd gear set coming from England. The parcel had travelled from England to SA in very good time, but according to the online tracking widget, at Customs it seemed to have kind of just gotten “stuck”. While I was in Namibia I had hoped that TNT would ring Danie when it arrived in the country and the importation would be finalised, but it seems they would rather leave it sit there.

This would be the first of many calls made to TNT over the coming days. We would ring chasing info or a form or clarification or something else to get it cleared, and they would snooze and snooze and snooze. We ultimately did get the parcel cleared, but only after I gave up in frustration and sic’ed Tanya on ‘em. 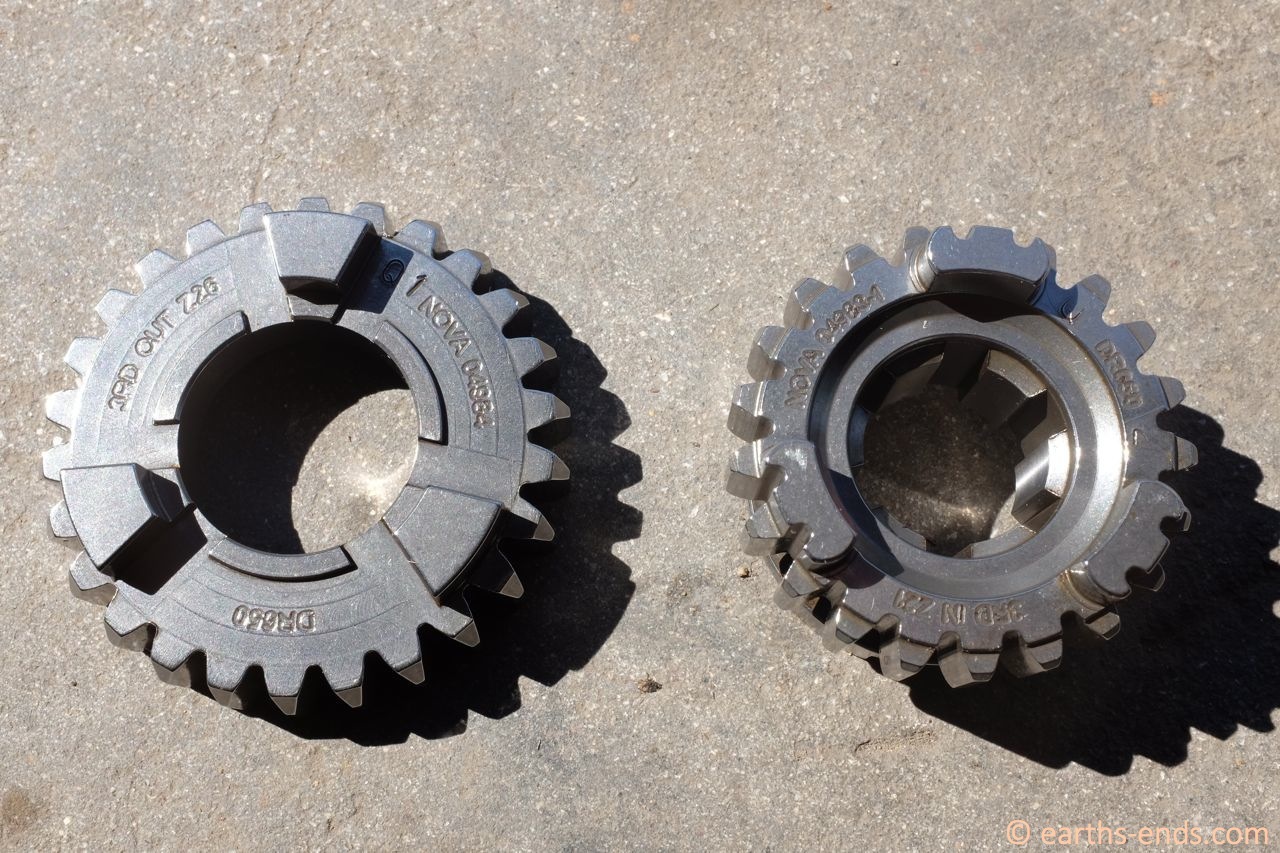 A lovely bit of hand made kit

After Tan’s dentist visit we moved back into Danie and Sara’s spare room in Stellenbosch and slipped back into old routines. These routines being namely; chatting, socialising, a bit of cooking, eating and drinking and generally having a good time with good company. With confirmation that the gear had finally cleared customs and would arrive the following day, I got to work and got the motor out and split. It was then a reasonably simple operation to get the new gears on the following day and put the motor back together. While all the bits and pieces were easily accessible, I also replaced my stator which was starting to act up a fair bit. Often it would charge no problems, but sometimes it would only charge a bit, and sometimes it wouldn’t charge at all. On inspection, some windings were starting to blacken so I’m guessing some of the winding insulation got damaged when the stator got intimately introduced to the flywheel way back in KZN at the start of the trip, and with a bit of heat one or more of the phases would drop in and out. It was terminal. Goodbye stator; I failed you, yet you served me well. 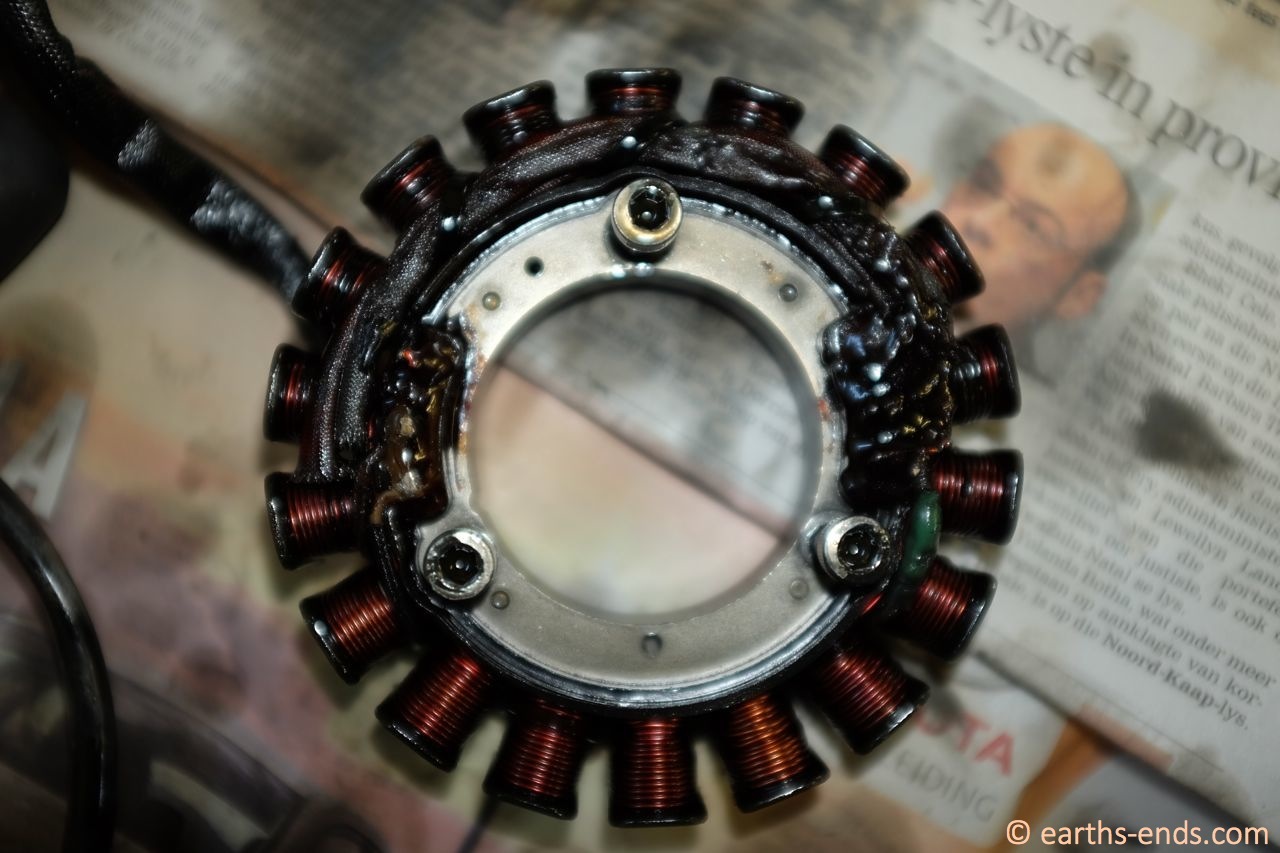 My damaged delta wired stator. The windings towards the top have got the black death 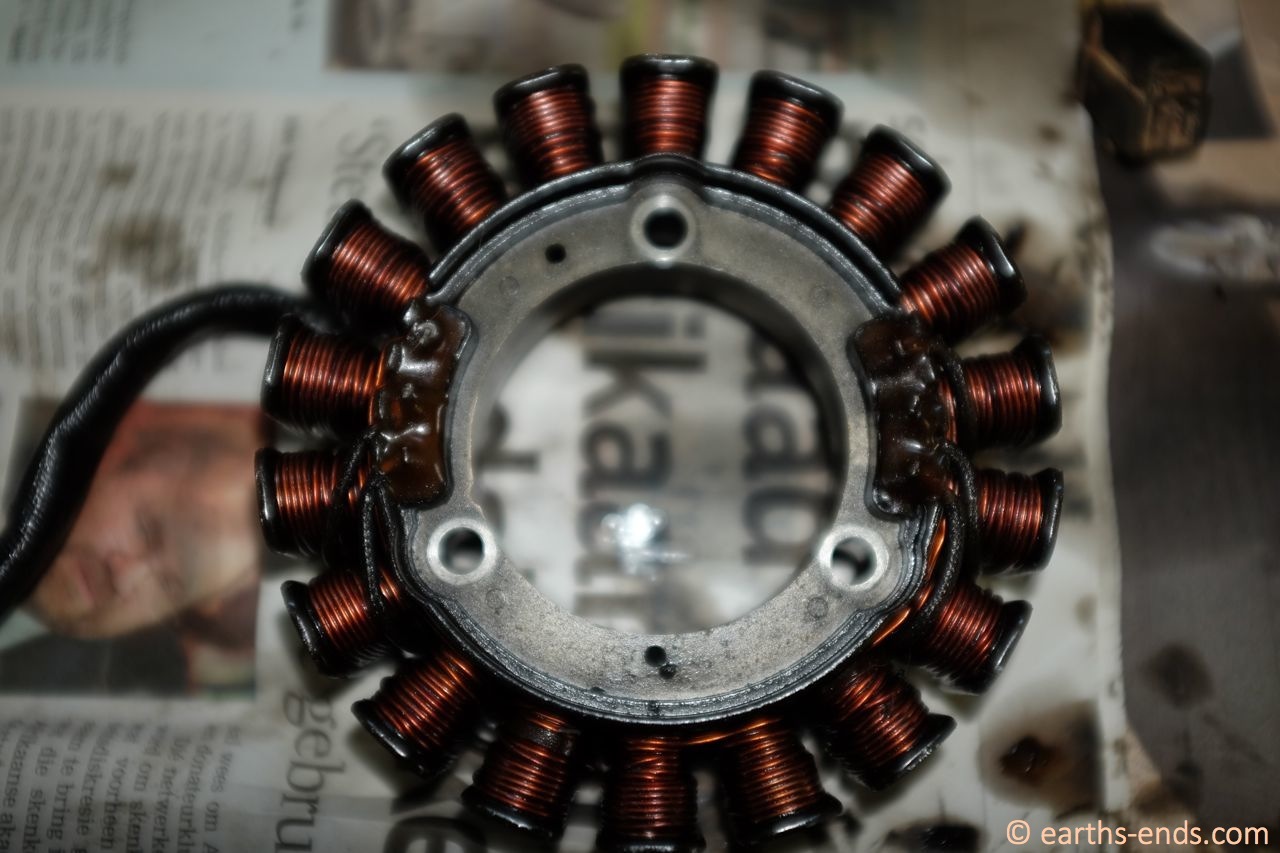 The replacement (before the delta modification) shows what the windings should look like. Before installing this one, I had to cut off the pulse coil from my faulty stator and attach it to this one and this one had failed. I also did the delta mod

Everyone we told that we were going to Botswana next told us to “get ready for sand”, so after establishing that we could get nothing at short notice from Gaborone, I tee’d up some knobby tyres to pick up plus a few other little consumables. With all that sourced, we were ready to roll the next morning.

We had one more late night with Danie and Sara, this time at a local seafood restaurant rather than our usual scenario of eating and chatting around their kitchen counter until very late in the evening, and often early the next morning. The following morning we made our usual failed attempt of getting away early, but with organising and packing to be done, combined with our (for now) permanent goodbyes from our new friends Danie and Sara, that was always going to happen. 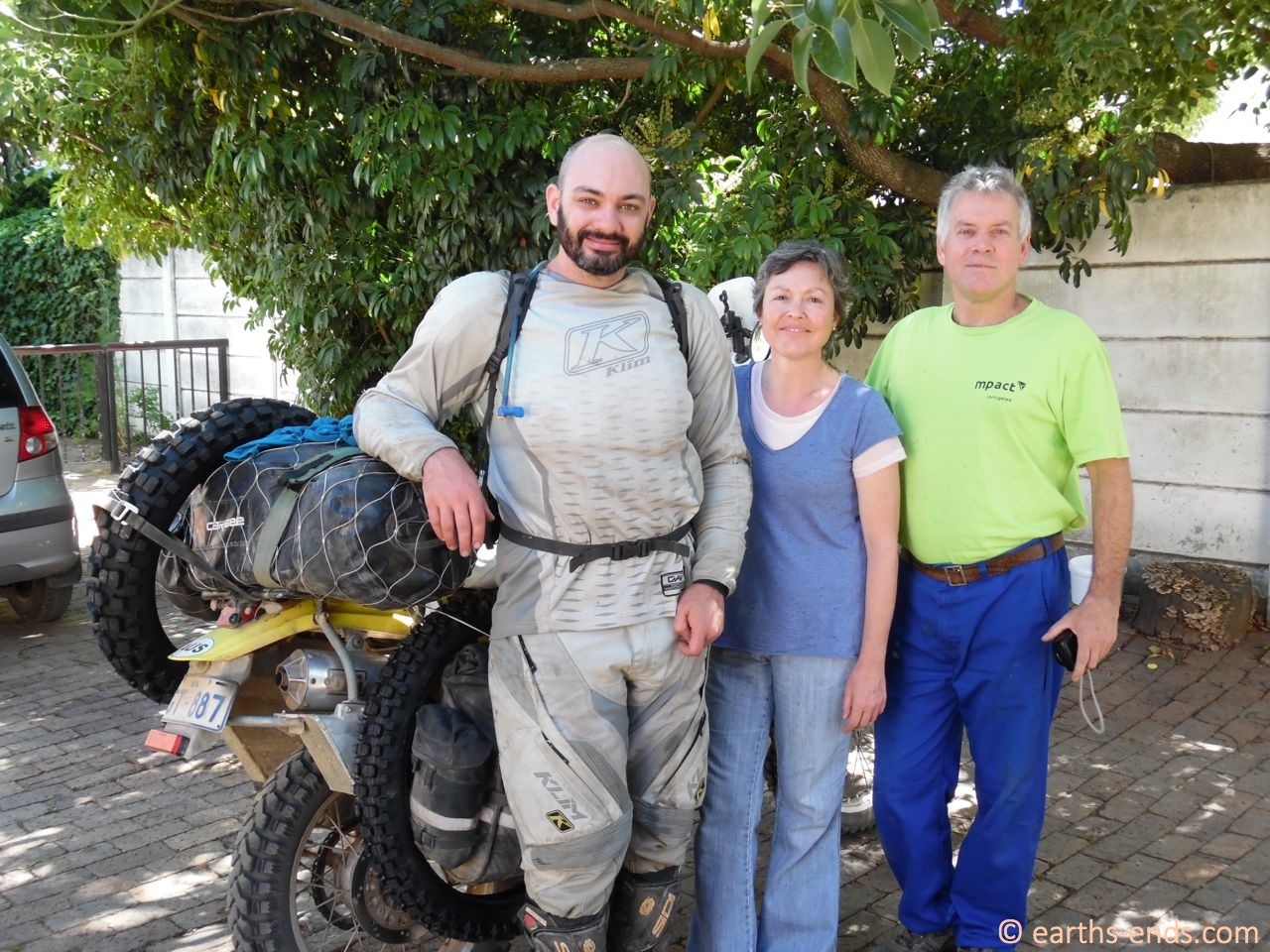 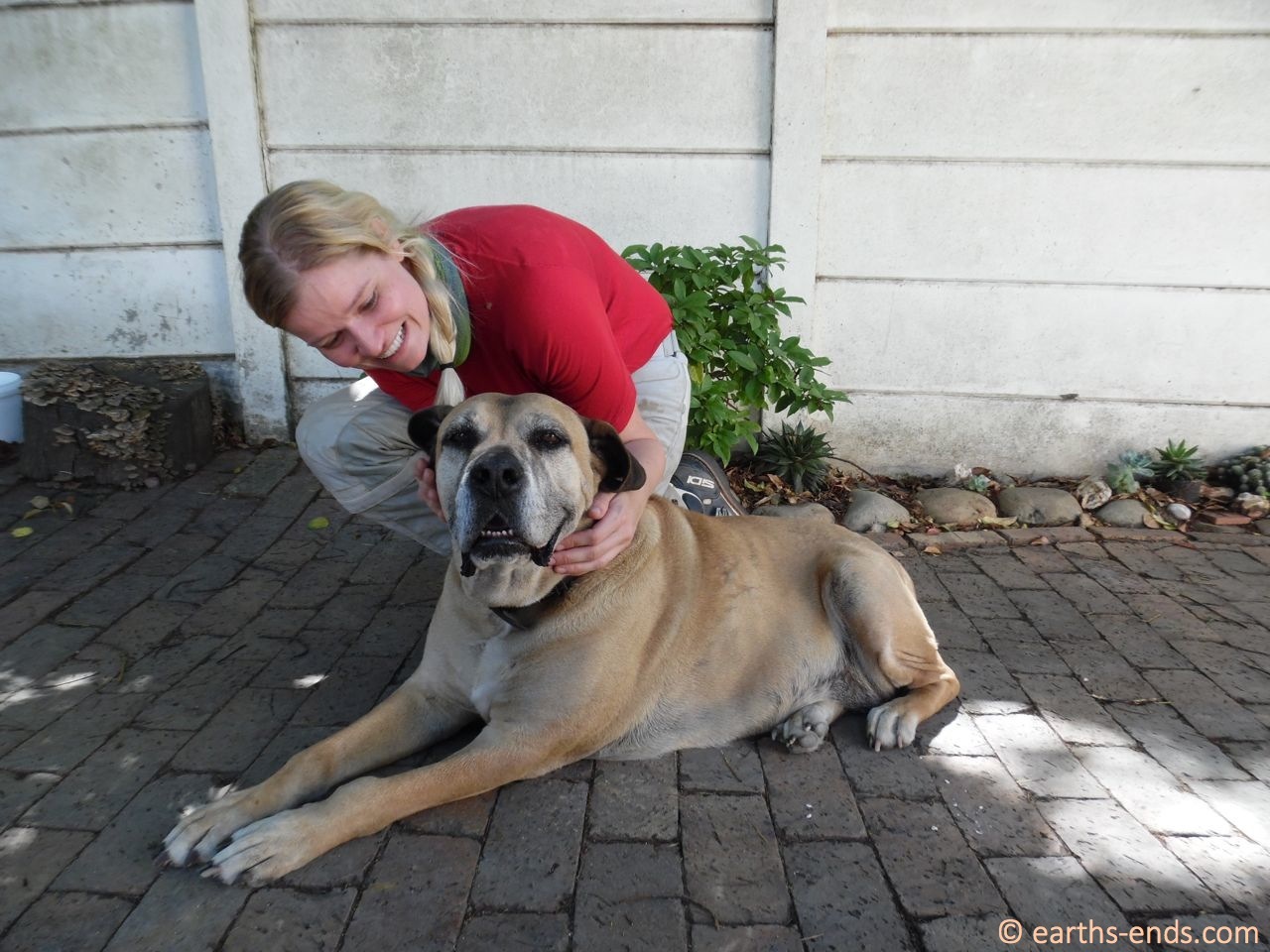 Tan saying goodbye to the dogs as usual 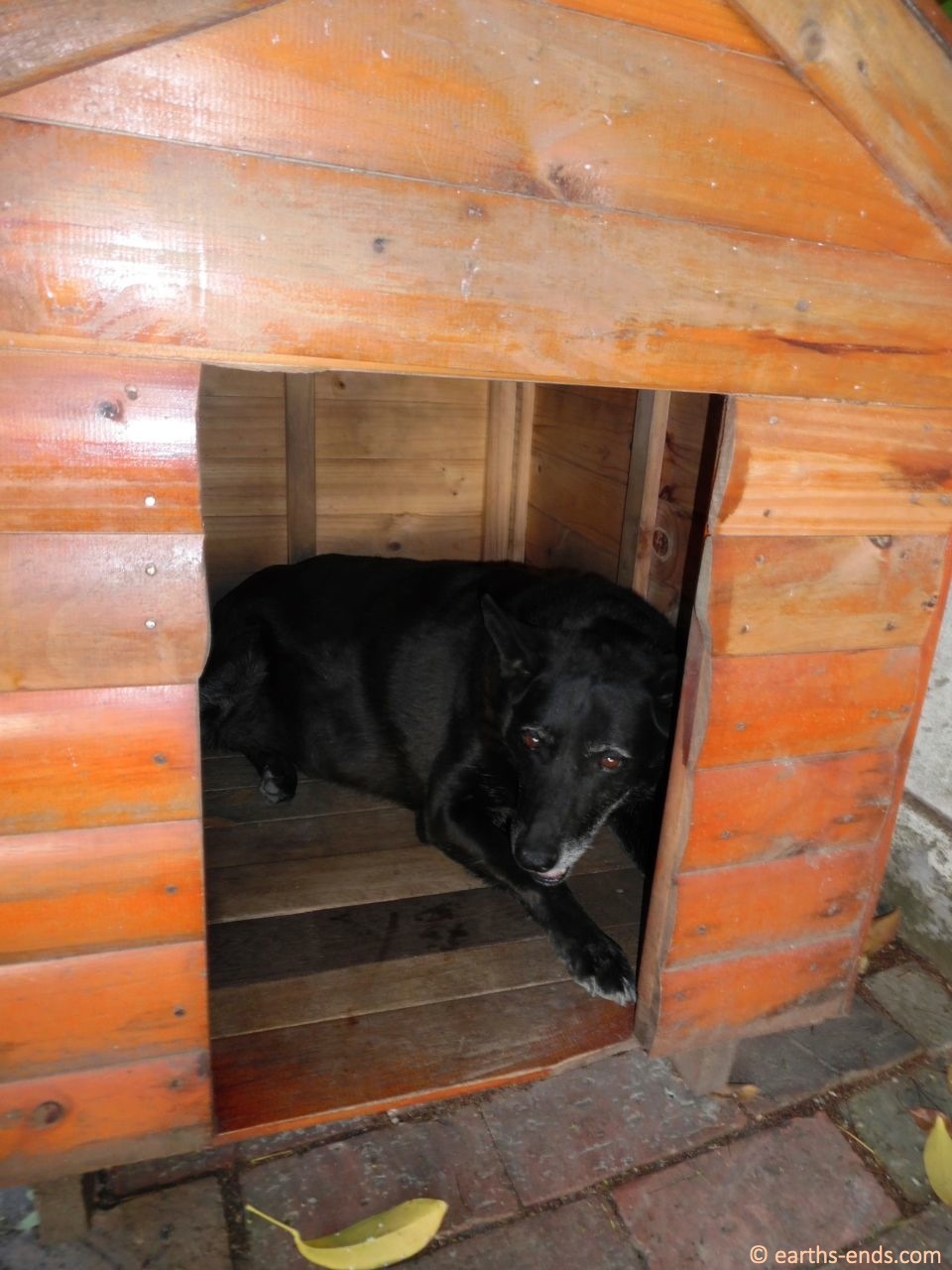 We made a brief stop in town to buy Tanya a new Camelbak, as her cheap hydration pack was starting to play up. We must have stuck out like sore thumbs in a flash Stellenbosch street, as while I waited outside with the bikes I got above our usual quota of interested folk come up and ask questions, generally inquire about the trip and wish us well while she was inside. When she returned, a well-dressed fellow crossed the road and invited us to have a coffee with him.  By now we were well and truly late and we had far away places we really had to get to, and I misinterpreted his meaning as “would we sit with him and chat”.  Worrying about the big ride looming large I started to politely decline, however, Tanya ever the unencumbered social butterfly, interrupted and accepted.

We wandered over the road were we had a couple fresh coffees made on the house and Tanya had her new camelbak filled with fresh icy water. All extremely generous. When they heard we were carrying a little moka pot for brewing coffee on our petrol stove in, they proceeded to grind a bag of their own in-house freshly roasted coffee and gave this to us as well, again on the house. How awesome is that? If ever in Stellenbosch, check out Merkabah Coffee for a good brew, they were cool guys.

We finally hit the road about 11:30, and on the way out of town saw Danie out driving who was no doubt quite amused to see us still around. We headed east on the R301 and went over Bainskloof Pass, before turning north. The R355 has the longest stretch of uninterrupted road in South Africa with about 250kms between Ceres and Calvinia. We stopped for some fuel for us and the bikes at Calvinia, our first stop apart from a brief stretch on the side of the R355, before smashing out a couple hundred more kays up the tar to Kenhardt. We did 640kms including a mountain pass, a heap of dirt, plus fuel and lunch in about 7 and a half hours. Pretty good going. 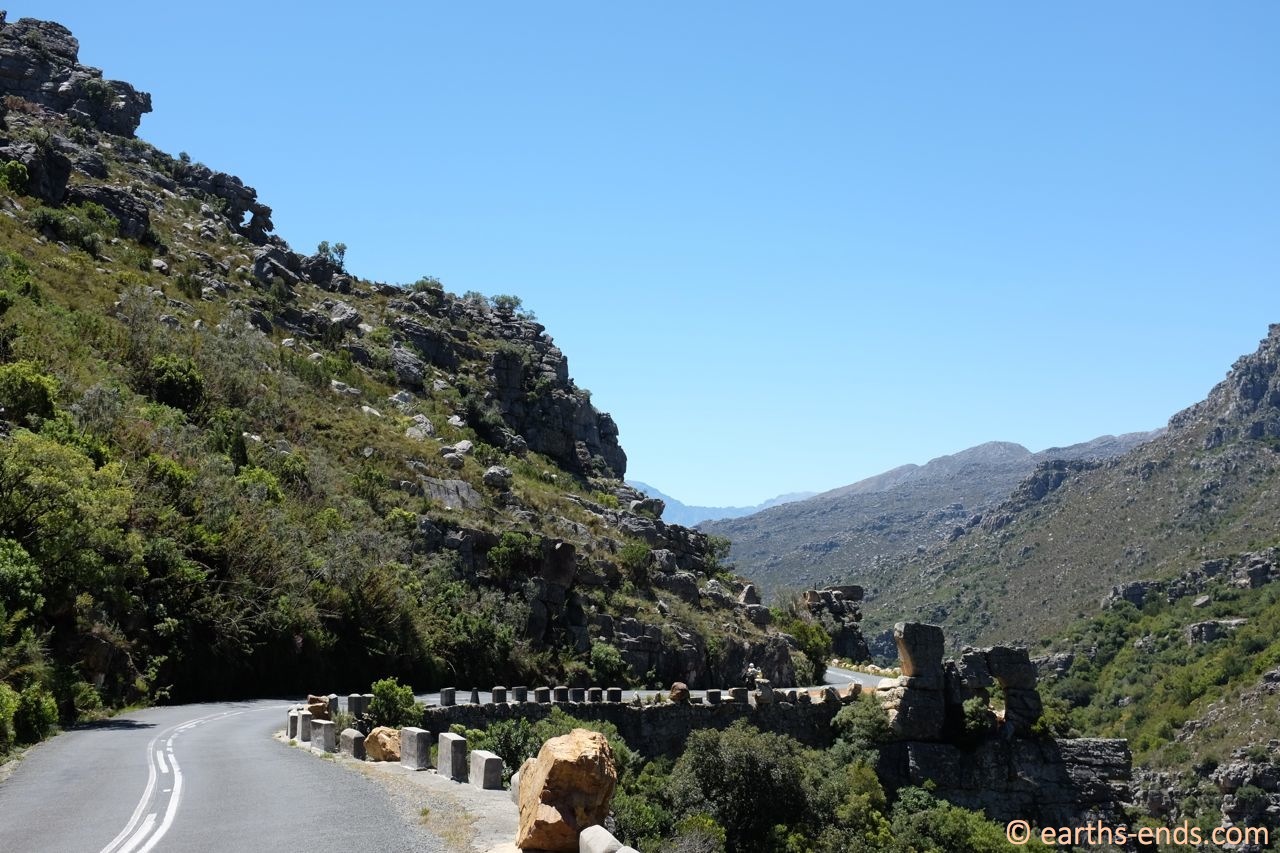 Bainskloof Pass was a nice surprise

The R355 is very Australia-esque – long, straight, and brown. It dissects the Cederburg on the left and the Tankwa Karoo on the right; both destinations we dearly wanted to go to but couldn’t. Oh well, another time.

We rolled into Kenhardt pretty knackered and found a cute little guesthouse run by an elderly Afrikaaner couple. When seeing me they must have felt sorry for Tan, as we/she was fussed over us incessantly. To the point were we were given two pieces of freshly baked home made milk tart, including some cinnamon sugar (which she went all the way back home to grab), which we devoured for dinner. Such has been the generosity we have faced at every turn in South Africa. Generous hosts welcoming us into their homes, braais, beers, wine, accommodation, freshly ground coffee, and now – milk tart. It was a good way to spend our last night. 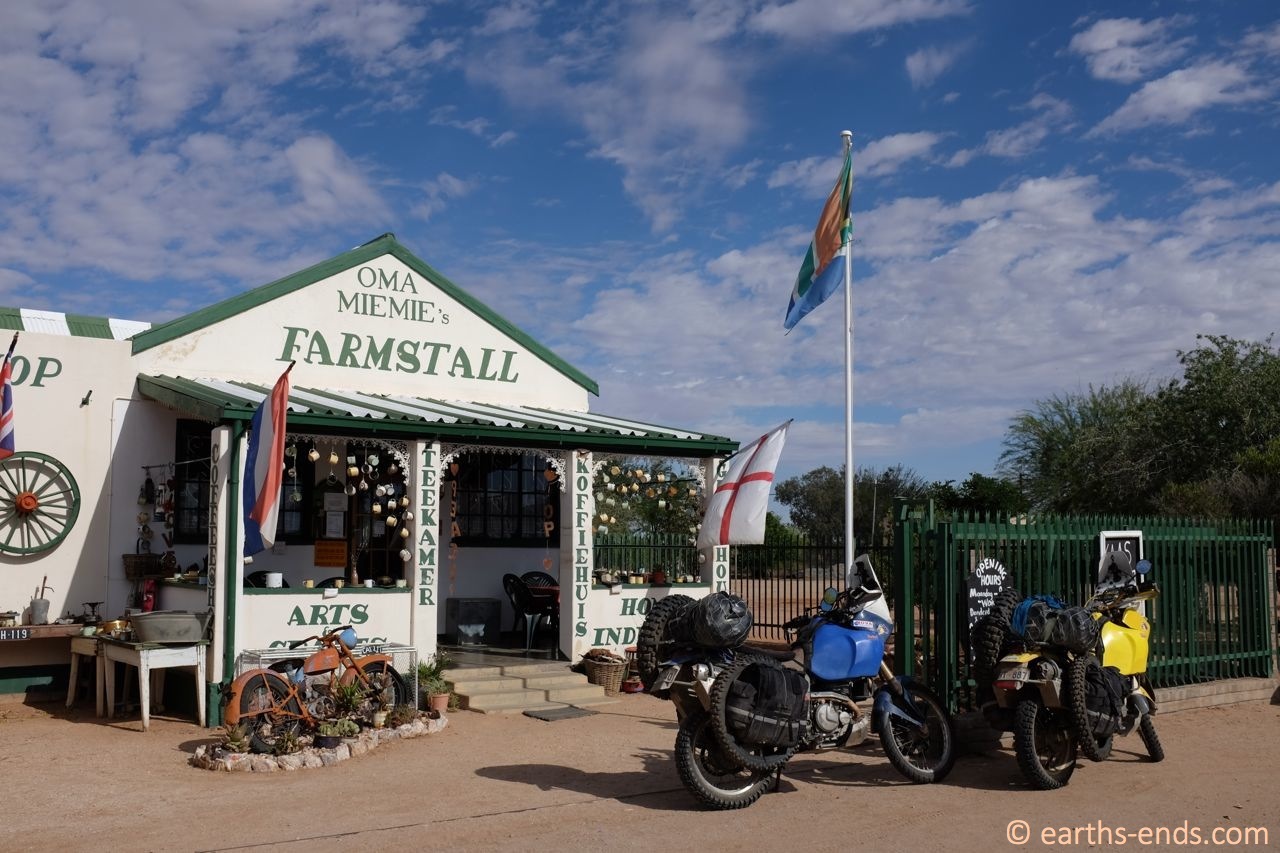 Farmstall in Kenhardt were we had some coffee and breakfast

One downside of our generous and attentive host was that while I was outside locking up the bikes and our gear, naturally in my jocks, the elderly lady came to check if we were all ok and if we had enjoyed the milk tart. Tan came out to thank her and received a warm hug goodnight, which she now came over to offer me. Now I’m hardly the most affectionate bloke around, so hugging strange old ladies in my underwear falls way outside my comfort zone. Thankfully the area wasn’t well lit, and I did my best to hide my overly casual attire from the old duck while giving her a quick hug from behind the bike. Hopefully I didn’t come off too rude, but better that then a misunderstanding leading to sexual assault charge. 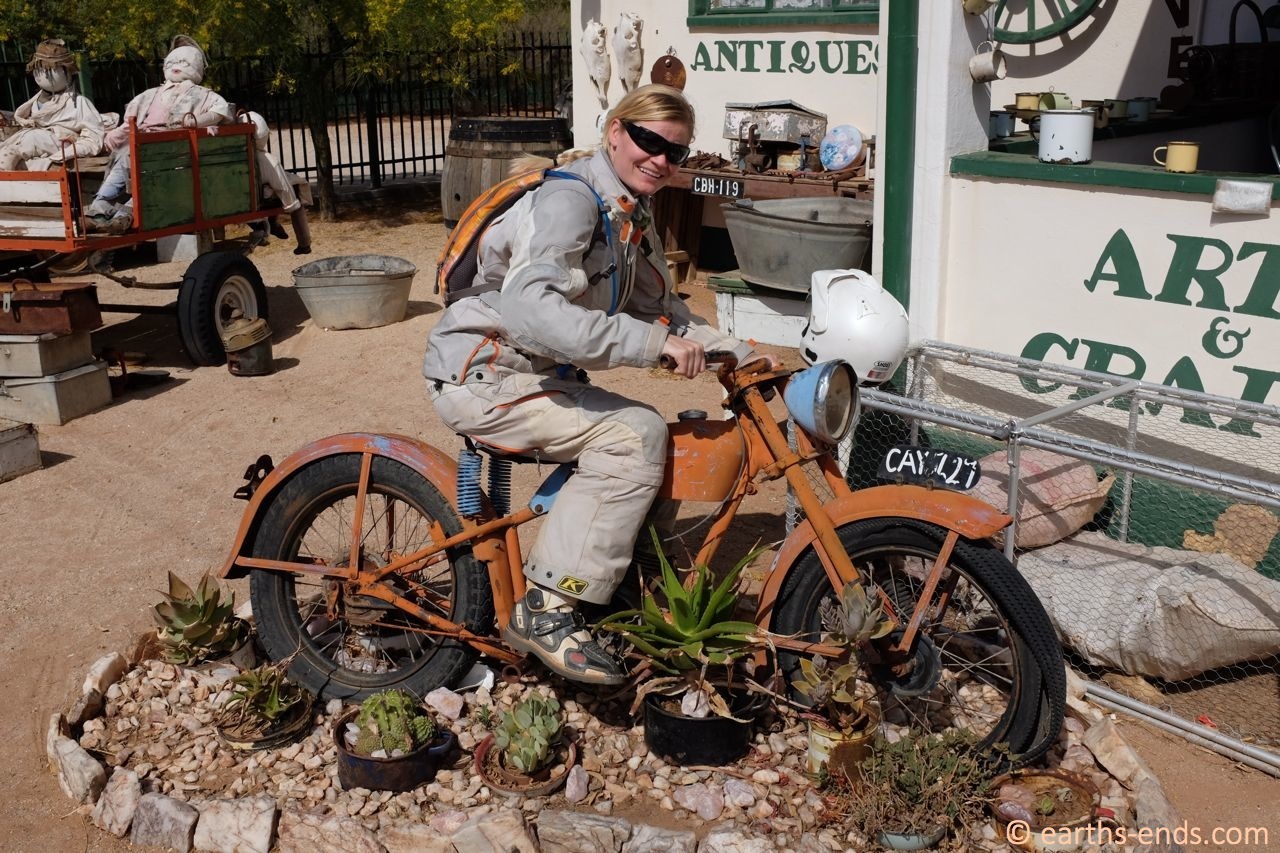 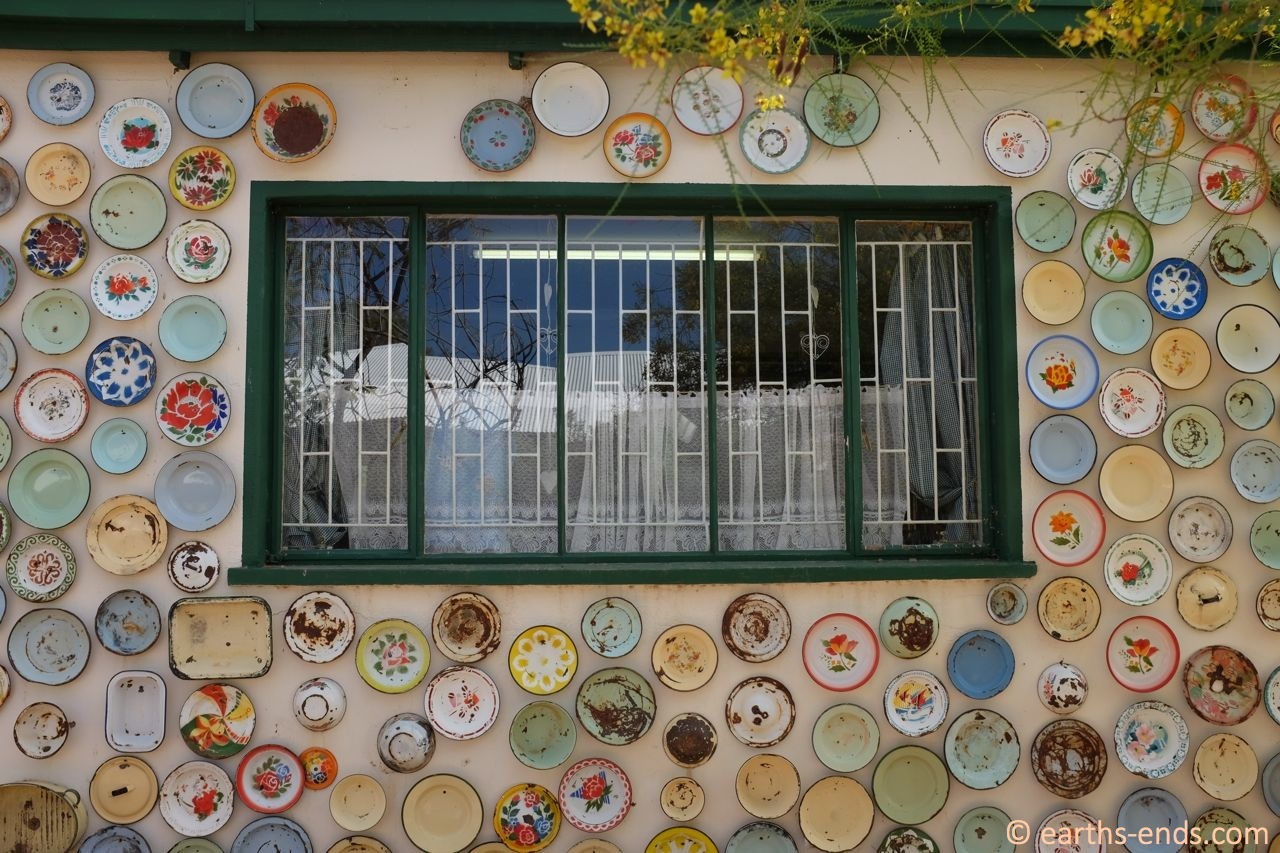 The last couple hundred kays to the border the next day were unexciting, but with our 7 day visas finishing that day we had no option but to take the main road and get to the Gemsbok/Bokspits Border post with enough time to clear before it closed. Here we received a little shock, the immigration lady asking Tanya if we had “reported to the DHA?”

“Department of Home Affairs” she said, tapping the visa stamped in Tanya’s passport with a hand written little time-bomb saying Report to DHA.

When we had gone through Senderlingsdrif Border Port 7 days previous the first thing the immigration lady on the South African side said was “you overstayed your visa!” We quickly pointed out that we actually hadn’t overstayed at all and confirmed the dates, and she begrudgingly gave us our 7 day visa that we knew we were entitled too. What she didn’t say though was anything to do with reporting to the DHA. She just handed the passports back and let that little titbit just fester away in Tanya’s passport.

Back at the Gemsbok Border Post we had a problem, as we were now trying to exit the country and we hadn’t reported to the DHA as commanded by the sneaky cow at Senderlingsdrif. The immigration official here seemed sensible enough, she seemed to believe that we had no idea what the comment was about, she seemed a bit confused as to why Tan’s Passport had the quite ambiguous Report to DHA message but mine didn’t, so she tried to ring the Senderlingsdrif Border Post to clarify. The Public Service being what it is, no one answered.

After about 20 or 30 minutes of her failing to get a hold of Senderlingsdrif and us shrugging our shoulders and waiting patiently, the immigration official stamped us out after making us promise we would report to the SA embassy in Gaborone. “Yeah sure, no problems” we said, fingers crossed to breaking point. “We will be sure to do that immediately upon arrival”. We made our way out into the stinking hot day, feeling every bit like the 42 deg C my digital dash said it was, and rode into Botswana.